Asian Elephants Have a Nasal Pronunciation

Mammal vocalizations might be more flexible than previously thought 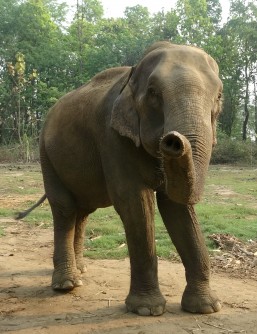 The elephant´s long trunk does not only sniff, it is also important for producing calls. Photo taken at Tiger Tops, Nepal. 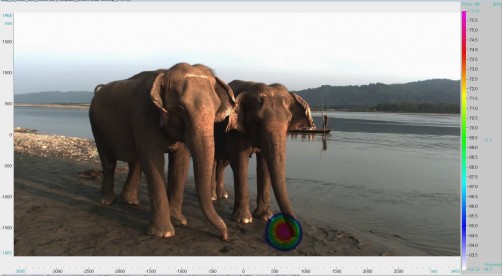 The acoustic camera image shows how the elephant (right) emits a call though the trunk. Photo taken at the elephants favourite bathing spot at the river near Tiger Tops, Nepal. 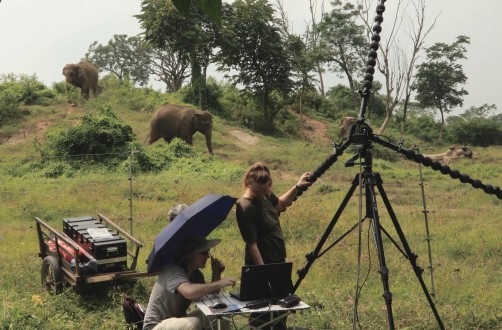 Veronika Beeck (right) and Michael Kerscher (left) are pointing the acoustic camera – an array of microphones – at the approaching elephants (in their enclosure at Tiger Tops, Nepal).

Newswise — With the help of an acoustic camera that visualizes sound pressure, researchers from the University of Vienna investigated the calls of Asian elephants. The elephants emitted their low frequency "rumbles" mainly through their trunk or through their mouth and trunk simultaneously, and only seldomly through their mouth alone. This is the first study to conclusively demonstrate the combined oral and nasal call emission in a non-human animal. The study has recently been published in the journal "Animals".

Elephants have the longest nasal elongation in the world. Not surprisingly, their low-frequency, partially infrasonic rumbles resonate even deeper when emitted through the long trunk. A team of cognitive biologists, Veronika Beeck and Angela Stoeger, from the University of Vienna has now shown that these vocal tract resonances, which is known as a nasal pronunciation in human language, also play a crucial role in animal communication. The researchers suggest that the increased vocal flexibility in Asian elephants potentially allows them to encode more information. Also, the lower frequency resonances may enhance the transmission of the calls over long distances.

Humans form vowels though tongue positions, lips, and mouth aperture, thereby shaping their vocal tract’s resonances. Specifically, by opening the velum and letting air stream through the oral and nasal cavities simultaneously, humans "nasalize" the sound of vowels. In many languages, such as French or Hindi, the nasalization of vowels changes the meaning of a word, such as beau [bo] meaning "beautiful" in French and the nasalized bon [bõ] meaning "good".

So far, mammals were expected to have far less flexibility to modify their vocal tract (the oral and nasal pathways above the larynx) and hence on the timbre of their calls. Across animals, calls often differ solely by being emitted either through the mouth or nose. In this current study, the Viennese researchers teamed up with engineers Gunnar Heilmann and Michael Kerscher. Together, they pointed an acoustic camera at Asian elephants in Nepal to see how they emit their calls. The acoustic camera, like a thermal camera, displays sound pressure in color coding.

Calls were mostly uttered though the trunk. "To our surprise, the acoustic camera also clearly showed calls that were emitted through the mouth and nose simultaneously. The resonance spectra of these calls were very similar to the ones described in human nasal vowels," explains Veronika Beeck. Although this was suggested in fallow deer, elephant seals and Diana monkeys before, this is the first study to conclusively prove orally and nasally combined calls.

Based on this new evidence, the researchers suggest that mammal calls might be more flexible than previously thought. Acoustic communication plays a critical role in social systems, such as the complex matriarchy of elephants, but the exact function of the mixed mouth–and–trunk emitted calls remain to be investigated.