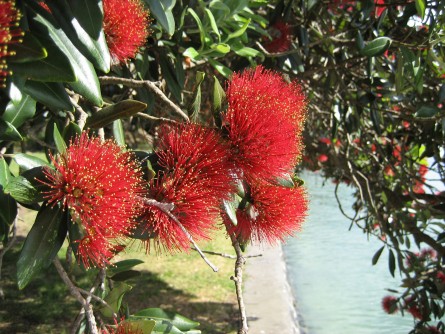 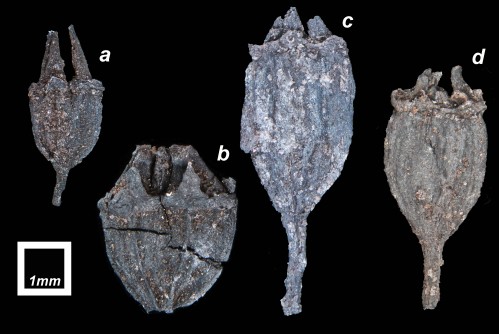 Newswise — Ancestors of the iconic New Zealand Christmas Tree, Pōhutukawa, may have originated in Australia, new fossil research from the University of Adelaide suggests.

Published in the American Journal of Botany, the research describes two new fossil species of Metrosideros, the scientific name for Pōhutukawa and related species. The fossils, found near St Helens, East Coast Tasmania, come from roughly the middle of the Cenozic era of about 25 million years ago.

“The Rātā, the most famous of which is the Pōhutukawa otherwise known as the New Zealand Christmas Tree, is one of New Zealand’s most iconic flowering plants, holding a special place in the hearts of Kiwis and is of particular significance in Maori culture,” says researcher Myall Tarran, PhD candidate in the University of Adelaide’s School of Biological Sciences. His research has been supervised by Professor Bob Hill, Executive Dean of the Faculty of Sciences at the University of Adelaide, and Dr Peter Wilson, a Principal Research Scientist at the Royal Botanic Gardens Sydney, in collaboration with Associate Professor Greg Jordan, University of Tasmania, and Honorary Associate Professor Mike Macphail, Australian National University.

“It is also one of, if not the, most widely spread flowering plant groups in the Pacific. It grows in Hawaii, Papua New Guinea, New Caledonia, Tahiti, the Bonin Islands near Japan, on sub-Antarctic islands, and many other islands in between, as well as having single representatives in Africa and South America.”

But surprisingly, Myall Tarran says considering the species’ unique and highly effective seed dispersal biology, Pōhutukawa is not found in Australia. In fact, Australia is the only major vegetated landmass in the Southern Hemisphere where Metrosideros does not occur today.

“The Rātā’s lightweight and robust seeds are able to be blown by light winds, survive freezing temperatures in the atmosphere and up to 30 days in salt water and still germinate,” he says.

“This makes it hard to pin down where the genus might have originated. Metrosideros seems to have achieved most of its present distribution relatively recently through dispersal.”

“Previous work we have done described the oldest fossils of Metrosideros from the earlier Eocene-Oligocene (35-40 million years ago) in Tasmania, showing that the genus once did occur in Australia but has since become extinct,” says Mr Tarran.

“This new research, which identifies two new fossil species of Metrosideros from Tasmania from about 25 million years ago, shows that a diversity of the trees once grew in Australia. But these more recent fossils belong to a subgenus of Metrosideros that is less widely distributed than the earlier fossils, mainly in areas that were part of the great supercontinent Gondwana – in Papua New Guinea, the Philippines, New Caledonia and New Zealand.

“These species may not have been as well adapted for long-distance dispersal as those other species, and so it is likely that they originated here”

“The fact that fossils with affinities to both subgenera of Metrosideros have been found in Australia now is strong evidence that the diversity of Rātā first evolved in Australia, and that the genus may have had an Australian origin. The question still remains as to why they became extinct in Australia.”