Autonomous pods SWARM together like bees in world first demonstration 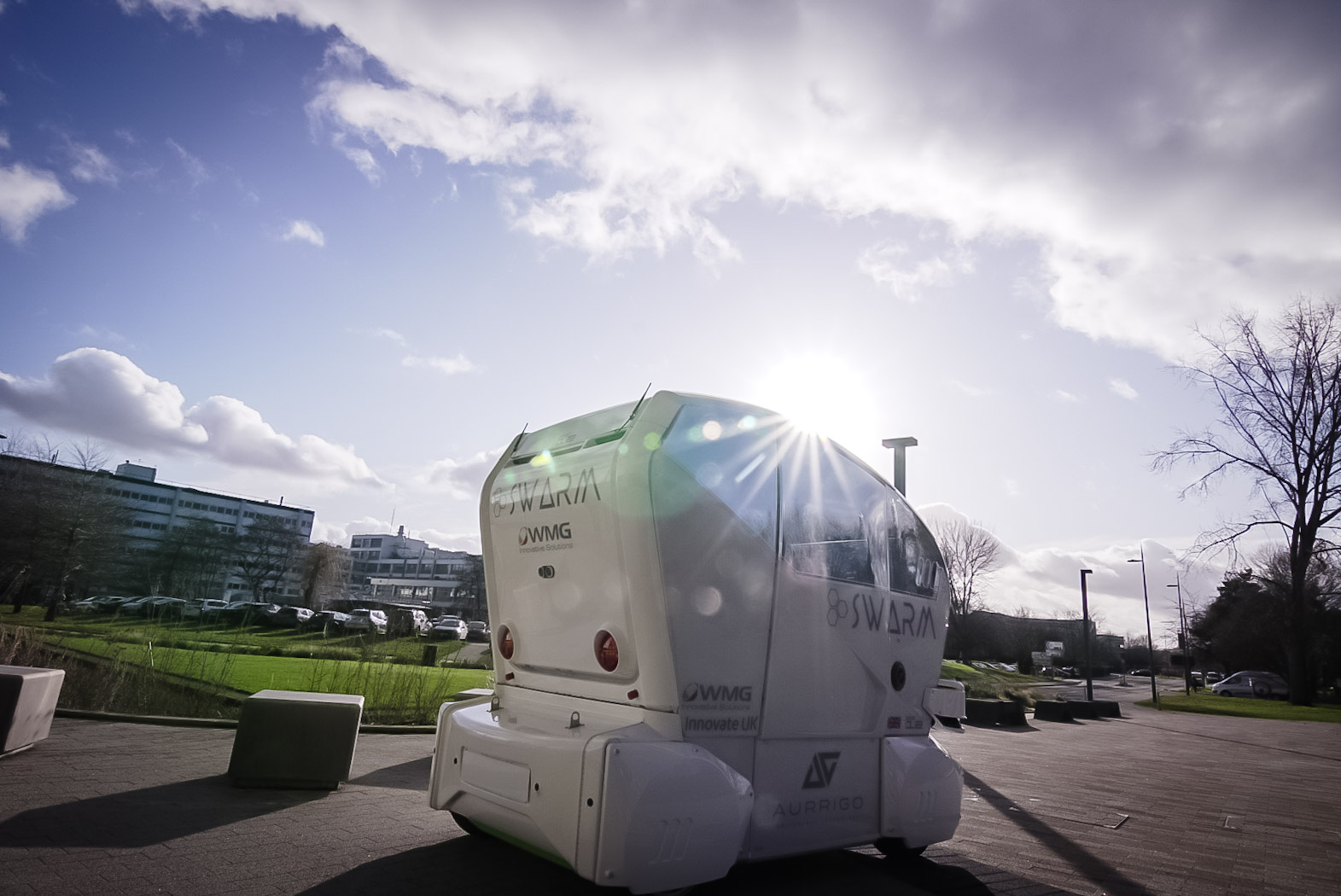 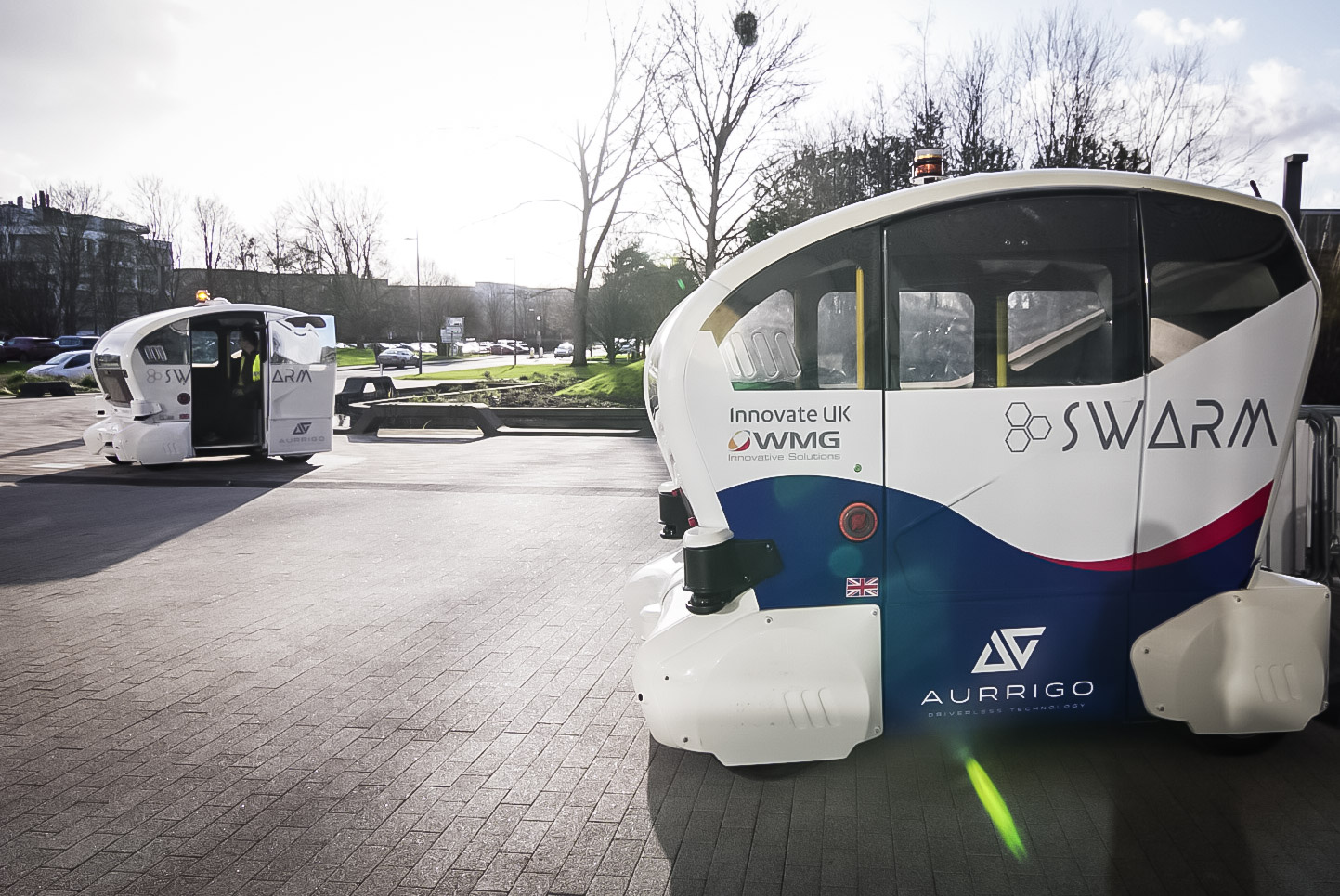 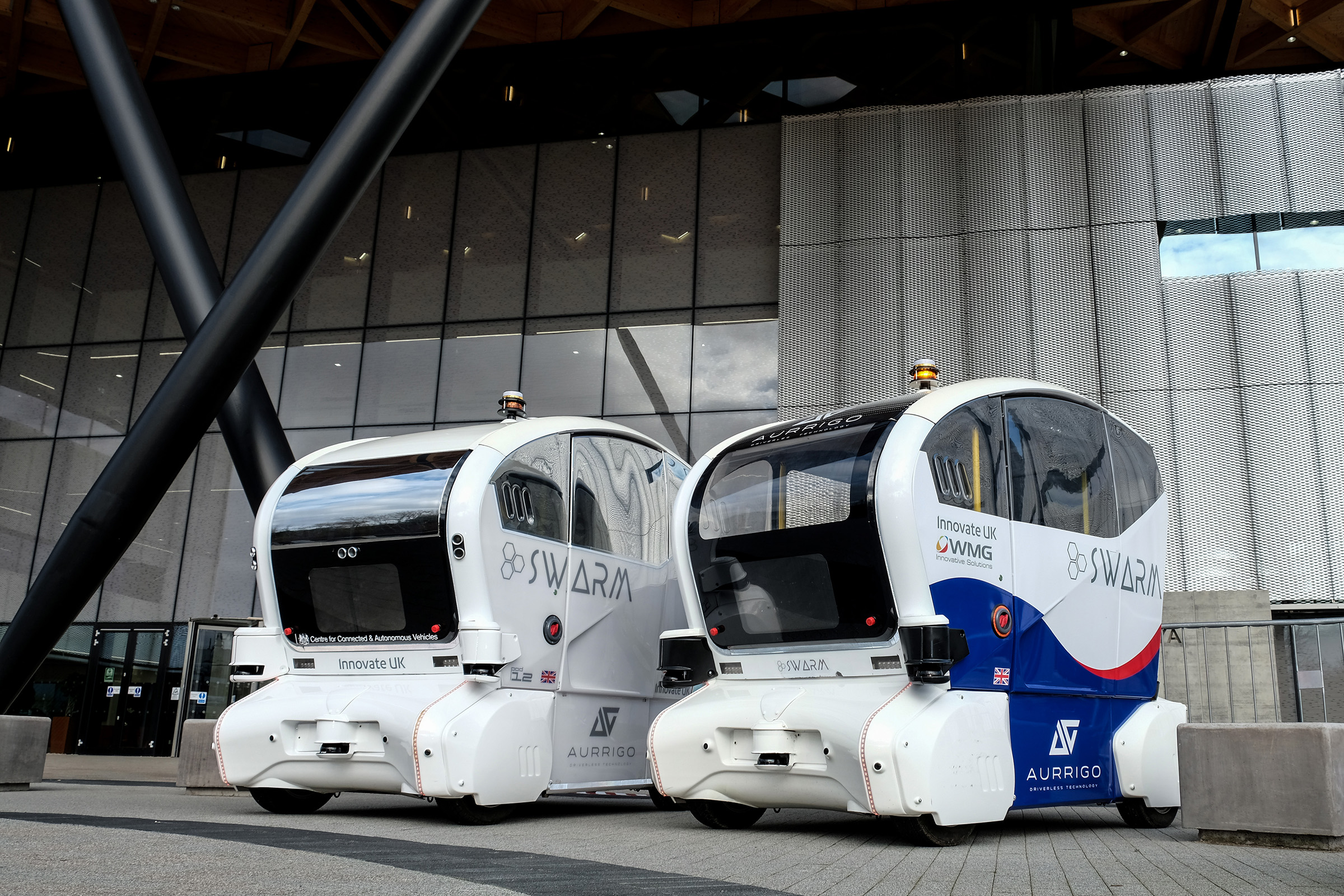 Newswise — Autonomous pods born in Coventry are now able to swarm together in a world first, thanks to research by WMG at the University of Warwick in partnership with Aurrigo and Milton Keynes council.

With the concept of driverless pods now more realistic than futuristic, the vehicles are one step closer to being put to use, as they can now help each other to drive and navigate through pedestrian areas around people.

The concept of Swarming pods was well received by the public, with the ultimate idea of using an app to hail a pod, or a platoon of pods if travelling in a group, seen as the next evolution of personal and public transport.

The pods are designed for pedestrian areas and shared spaces, so public transport can be used on highways and the pods can be used as a “first and last mile service”.

Researchers at WMG integrated Swarm intelligence into the Pods by implementing swarming skills typically used by birds and insects.

The success of ‘swarming’ means that Pods can now schedule themselves to form a ‘platoon’, following each other when possible, to minimise the number of individual vehicle movements and the need for a supervisor per pod. In the future, it’s expected that a supervisor can watch several pods and report any unexpected behaviour.

The technology also enables the Pods, working within a fleet, to automatically optimise their behaviour to meet future passenger demand by distributing themselves within a city to the areas where they will most likely be requested.

Dr Roger Woodman, associate Professor in human factors at WMG at the University of Warwick said:

“The SWARM algorithm has been tested and is proven to be effective and reliable. The ability to make pods ‘swarm’ together like a group of bees or birds, means they can coordinate with each other, bringing them one step closer to our streets.”

“The collaborative SWARM algorithms have been developed to enable our autonomous vehicles to optimise their own trip schedules, so they deliver the optimum efficiency from a fleet of vehicles.

“The swarming technology is very exciting and has the potential to operate large fleets of remotely supervised autonomous vehicles in a safe and scalable way. Interest in this will be huge.”

About WMG, University of Warwick

WMG is a world leading research and education group, transforming organisations and driving innovation through a unique combination of collaborative research and development, and pioneering education programmes.

As an international role model for successful partnerships between academia and the private and public sectors, WMG develops advancements nationally and globally, in applied science, technology and engineering, to deliver real impact to economic growth, society and the environment.

WMG’s education programmes focus on lifelong learning of the brightest talent, from the WMG Academies for Young Engineers, degree apprenticeships, undergraduate and postgraduate, through to professional programmes.

An academic department of the University of Warwick, and a centre for the HVM Catapult, WMG was founded by the late Professor Lord Kumar Bhattacharyya in 1980 to help reinvigorate UK manufacturing and improve competitiveness through innovation and skills development.

Aurrigo, which created ten new jobs over the last twelve months, has seen demand for its driverless pods soar following the successful completion of major trials in the UK and across the world proved that its technology can deliver safe and efficient ‘first and last mile’ transport solutions.

Sales have come from customers in Australia, Canada, Finland, Singapore and the US, with the latest deal seeing one of its ‘Pod Zeros’ heading to China, a potential landmark moment for the Coventry-based business.This growth takes its annual sales up to £4.2m and, with a strong pipeline of future orders in place, the company is predicting a further £6m of contracts between now and the end of 2020.