Vocal threshold may hamper survival of this Arctic species 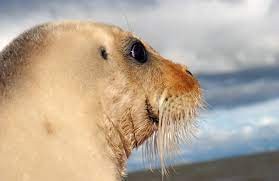 Newswise — Ithaca, NY— During mating season, male bearded seals make loud calls to attract a mate—even their "quiet" call could still be as ear-rattling as a chainsaw. Bearded seals have to be loud to be heard over the cacophony of their equally loud brethren. And, increasingly, the noise humans make is adding to the underwater din and could have serious consequences. A study conducted by the Cornell Lab of Ornithology’s Center for Conservation Bioacoustics (CCB) aims to understand how resilient bearded seals can be to changes in ambient underwater noise. The results are published in Proceedings of the Royal Society: Biological Science.

"We wanted to know whether bearded seals would call louder when their habitat grew noisy from natural sound sources," says CCB postdoctoral research associate Michelle Fournet who led the study. "The goal was to determine if there was a 'noise threshold' beyond which seals either couldn't–or wouldn't–call any louder in order to heard. By identifying this naturally occurring threshold, we can make conservation recommendations about how loud is too loud for human activities.'

From spring through early summer, the under-ice habitat near Utqiagvik, Alaska, is flooded with the vocalizations of male bearded seals—a sound that can be best described as "otherworldly." These elaborate vocalizations are essential for bearded seal reproduction, but in the rapidly changing Arctic soundscape, where noise from industrial activities is predicted to dramatically increase in the next 15 years, bearded seals may need to adjust their calling behavior if they are going to be heard above the noise generated by ships and commercial activities. But the bearded seals can only do so much.

Fournet and colleagues listened to thousands of recorded bearded seal vocalizations from Arctic Alaska spanning a two-year period. Each call was carefully measured and compared to the concurrent ambient noise conditions. What they found is that bearded seals do call louder as their underwater acoustic habitat gets noisier, but there is an upper limit to this behavior. As expected, when ambient noise gets too high, bearded seals are no longer able to compensate in order to be heard. As a result, as ambient noise conditions increase, the distance over which individuals can be detected goes down.

"Given that these are reproductive calls, it is likely that the seals are already calling as close to as loudly as possible–the males very much want to be heard by the females," Fournet says. "So, it is unsurprising that there is an upper limit. I'm grateful that we have been able to identify that limit so we can make responsible management choices moving forward.”

"This work never would have happened without the insight and guidance of Arctic communities," Fournet says. "It was their energy that led the Cornell Lab to place hydrophones in the water. It is our job to continue listening."