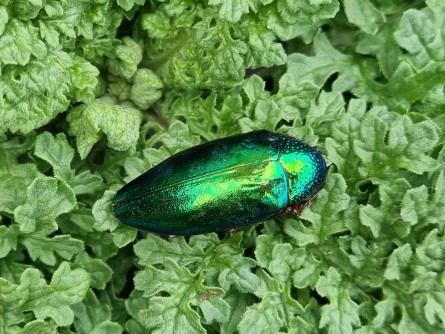 Jewel beetle (Sternocera sp.) iridescence can protect prey via camouflage and by acting as a form of deceptive warning coloration 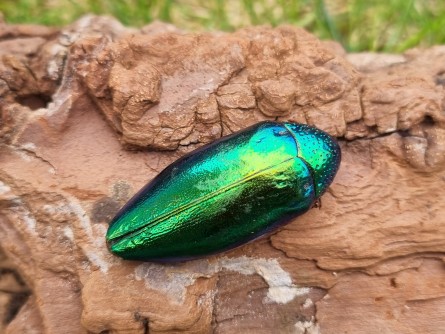 Jewel beetle (Sternocera sp.) iridescence can protect prey via camouflage and by acting as a form of deceptive warning coloration

Newswise — A new study published today in Animal Behaviour shows for the first time that brilliant iridescence and gloss found in some animals can have a protective function by working as a form of deceptive warning colouration, and that it is the key feature of iridescence, its changing colours, that is important for this effect.

This striking form of structural coloration in which the hue and intensity of colours will vary depending on the angle of view, has also evolved independently in everything from birds such as magpies and starlings, to many insects such as rose chafers, rosemary beetles and in the demoiselle.

By looking at its biological functions, a team of researchers at Bristol University’s CamoLab investigated why this vivid metallic coloration has evolved so may times in the animal kingdom, and what makes this striking form of animal coloration such a successful anti-predator strategy. The team had previously discovered that iridescence can act as a highly efficient form of camouflage, but whether such striking forms of structural coloration could also protect prey post-detection, and if so, what optical properties were important for this effect, remained unknown until now.

They tested if and how iridescence could provide a survival benefit to prey post-detection by presenting both iridescent and non-iridescent, as well as glossy and matte versions of the two, to birds that had no previous experience with such prey, and then looked at the birds’ willingness to attack the prey. They found that iridescence significantly reduced the attack-willingness of the birds, and that gloss also had an independent effect.

“Here we have, for the first time, effectively managed to test for each of these two effects on their own, and shown that both iridescence and gloss can protect prey even post-detection, providing yet another adaptive explanation for the evolution and widespread existence of iridescence” Dr. Kjernsmo added.

The study was funded by the Biotechnology & Biological Sciences Research Council (BBSRC).