Is it human nature to ignore degrading environments? 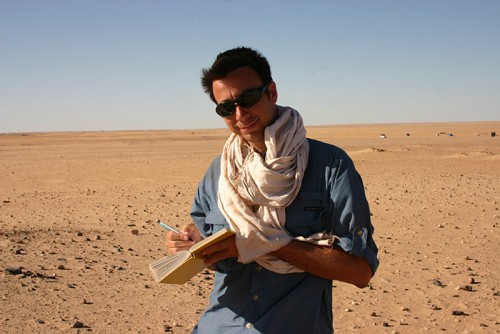 ASU bioarchaeologist Christopher Stojanowski - with collaborators at the University of Chicago - directed excavations at Gobero, once home to a large lake and lush region in the Sahara. Ancient human remains from the site give clues to how past peoples moved across their landscape as their environment deteriorated.

Newswise — Over millennia, the Sahara has gone through cycles of greening and aridity. During times when this region was lush and covered with bodies of water, it supported a wide variety of life, including human.

Arizona State University bioarchaeologists Christopher Stojanowski and Kelly Knudson are studying the remains of some of these ancient humans to understand how their changing climate affected their ability and need to move across the landscape.

Stojanowski and Knudson’s research site is located in central Niger. Known as Gobero, it was home to a large lake during the middle Holocene, roughly five- to seven-thousand years ago. The humans who made their homes around the lake at this time depended on hunting, gathering and fishing, and some kept cattle.

Along with collaborators at the University of Chicago, Stojanowski directed excavations at the Gobero site, which offers a rich mortuary record.

Back at ASU, in the Archaeological Chemistry Laboratory, Knudson sampled bone and teeth enamel, and used their chemical signatures to determine individuals’ origins, as well as where they resided during the course of their lives.

The results suggest that individuals chose different mobility strategies but that near the end of the lake area’s occupation, as their environment dried out, Saharan peoples became more mobile.

“To me, what is exciting about this research is that we are able to use information from science – including anthropology, chemistry and geology – to understand how people in the past responded to a drier environment,” Knudson says.

Adds Stojanowski, “The data seem to indicate this shift to greater mobility occurred only at the very end of the archaeological sequence, which may suggest that responses to increasingly arid conditions may have occurred only under the direst of circumstances.”

Stojanowski and Knudson, who are associate professors in the School of Human Evolution and Social Change in the College of Liberal Arts and Sciences, recently published their findings in the American Journal of Physical Anthropology.

Though the research subjects lived and died thousands of years ago, Knudson believes they have much to teach us. Understanding how they adapted to drier conditions can help human populations today and in the future to solve their own climatic challenges.

Stojanowski points out that one lesson to be learned might be that it is human nature to ignore a problem like a degrading environment until forced to face it.

“In this case, the Sahara was always going to win. The result was that a bustling center of human life and experience, one that existed for over 5,000 years, was completely abandoned and ceded to the sands,” he illustrates. “I might also note that the offset of habitability may have been very quick in the sense of a human lifespan. As the Sahara dried and ecosystems adjusted, imagine the abundance of fish left in the lake, the animals drawn to the surface waters that were dwindling across northern Africa. It may have seemed like the best of times to the people that lived there – easy and plentiful food until the Rubicon was crossed and life became unsustainable.”