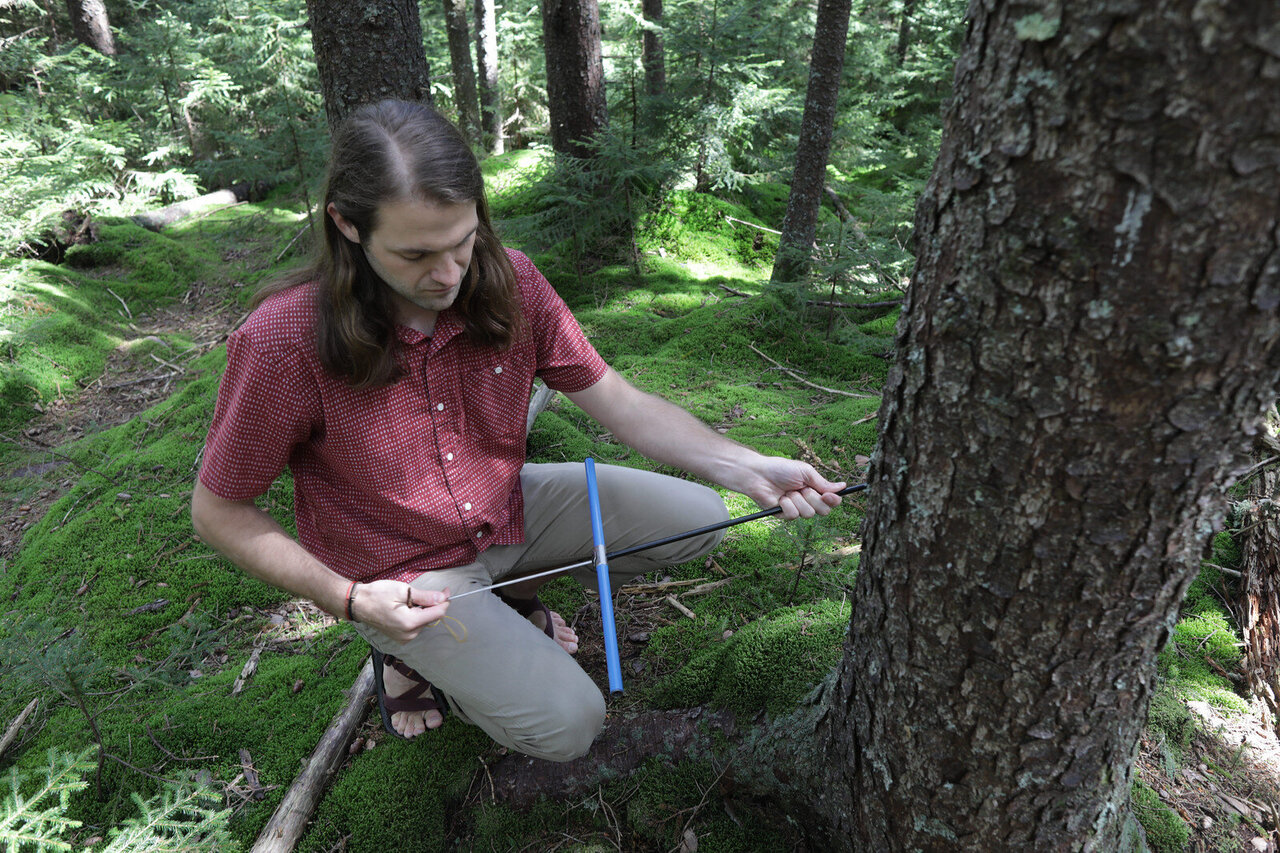 Justin Mathias holding a tree increment borer next to a red spruce tree at Gaudineer Knob in West Virginia, May 2018. Newswise — MORGANTOWN, W.Va.—New research from West Virginia University biologists shows that trees around the world are consuming more carbon dioxide than previously reported, making forests even more important in regulating the Earth’s atmosphere and forever shift how we think about climate change.

In a study published today in the Proceedings of the National Academy of Sciences, Professor Richard Thomas and alumnus Justin Mathias (B.S. Biology, ’13 and Ph.D. Biology, ’20) synthesized published tree ring studies. They found that increases in carbon dioxide in the atmosphere over the past century have caused an uptick in trees’ water-use efficiency, the ratio of carbon dioxide taken up by photosynthesis to the water lost by transpiration – the act of trees “breathing out” water vapor.

“This study really highlights the role of forests and their ecosystems in climate change,” said Thomas, interim associate provost for graduate academic affairs. “We think of forests as providing ecosystem services. Those services can be a lot of different things – recreation, timber, industry. We demonstrate how forests perform another important service: acting as sinks for carbon dioxide. Our research shows that forests consume large amounts of carbon dioxide globally. Without that, more carbon dioxide would go into the air and build up in the atmosphere even more than it already is, which could exacerbate climate change. Our work shows yet another important reason to preserve and maintain our forests and keep them healthy.”

Previously, scientists have thought that trees were using water more efficiently over the past century through reduced stomatal conductance – meaning trees were retaining more moisture when the pores on their leaves began closing slightly under rising levels of carbon dioxide.

However, following an analysis using carbon and oxygen isotopes in tree rings from 1901 to 2015 from 36 tree species at 84 sites around the world, the researchers found that in 83% of cases, the main driver of trees’ increased water efficiency was increased photosynthesis – they processed more carbon dioxide. Meanwhile, the stomatal conductance only drove increased efficiency 17% of the time. This reflects a major change in how trees’ water efficiency has been explained in contrast to previous research.

“We’ve shown that over the past century, photosynthesis is actually the overwhelming driver to increases in tree water use efficiency, which is a surprising result because it contradicts many earlier studies,” Mathias said. “On a global scale, this will have large implications potentially for the carbon cycle if more carbon is being transferred from the atmosphere into trees.”

Since 1901, the intrinsic water use efficiency of trees worldwide has risen by approximately 40% in conjunction with an increase of approximately 34% in atmospheric carbon dioxide. Both of these characteristics increased approximately four times faster since the 1960s compared to the previous years.

While these results show the rise in carbon dioxide is the main factor in making trees use water more efficiently, the results also vary depending on temperature, precipitation and dryness of the atmosphere. These data can help refine models used to predict the effects of climate change on global carbon and water cycles.

“Having an accurate representation of these processes is critical in making sound predictions about what may happen in the future,” Mathias said. “This helps us get a little closer to making those predictions less uncertain.”

The study is a product of the researchers’ seven-year research collaboration during Mathias’ time as a doctoral student. After graduating from WVU, Mathias joined University of California, Santa Barbara as a postdoctoral researcher.

“Since moving to California, my work has taken a turn from being in the field, collecting measurements, analyzing data and writing manuscripts,” Mathias said. “My new position is more focused on ecological theory and ecosystem modeling. Instead of measuring plants, I form hypotheses and seek out answers to questions using computer models and math.”

In the future, Mathias aspires to become a professor at a research university to continue these research pursuits. “I would love to run my own lab at a university, mentor graduate students and pursue research questions to continue building on the work we’ve already accomplished. There’s been a lot of progress in our field. There are also an infinite number of questions that are relevant moving forward,” Mathias said. “I owe everything to my time and training from the people at WVU. My long-term goal is to be in a position where I can continue moving the field forward while giving back through teaching and mentoring students.”

Caption: Justin Mathias holding a tree increment borer next to a red spruce tree at Gaudineer Knob in West Virginia, May 2018.