"Blurred Times" in a Quantum World 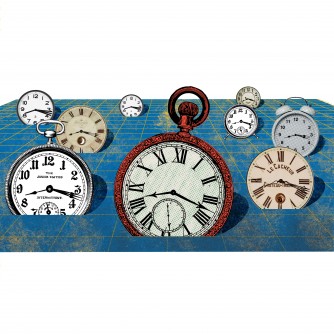 The idealized picture of space and time in general relativity assigns an ideal clock to each point in space, which tick evenly without being influenced by the nearby clocks. However, when quantum mechanical and gravitational effects are taken into account, this picture is no longer tenable, as the clocks mutually disturb each other and hands of the clocks become "fuzzy".

Newswise — In everyday life we are used to the idea that properties of an object can be known to an arbitrary precision. However, in quantum mechanics, one of the major theories in modern physics, Heisenberg's uncertainty principle asserts a fundamental limit to the precision with which pairs of physical properties can be known, such as the energy and time of a clock.

The more precise the clock is, the larger is the uncertainty in its energy. An arbitrarily precise clock would therefore have an unbounded uncertainty in its energy. This becomes important when including Einstein’s theory of general relativity, the other key theory in physics, into the picture. General relativity predicts that the flow of time is altered by the presence of masses or sources of energy. This effect, known as "gravitational time dilation", causes time to run slower near an object of large energy, as compared to the situation in which the object has a smaller energy.

Putting the pieces togetherCombining these principles from quantum mechanics and general relativity, the research team headed by Časlav Brukner from the University of Vienna and the Institute of Quantum Optics and Quantum Information demonstrated a new effect at the interplay of the two fundamental theories. According to quantum mechanics, if we have a very precise clock its energy uncertainty is very large. Due to general relativity, the larger its energy uncertainty the larger the uncertainty in the flow of time in the clock’s neighbourhood. Putting the pieces together, the researchers showed that clocks placed next to one another necessarily disturb each other, resulting eventually in a "blurred" flow of time. This limitation in our ability to measure time is universal, in the sense that it is independent of the underlying mechanism of the clocks or the material from which they are made. "Our findings suggest that we need to re-examine our ideas about the nature of time when both quantum mechanics and general relativity are taken into account", says Esteban Castro, the lead author of the publication.