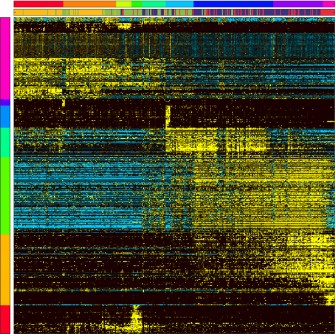 With a jumble of colors resembling abstract art, this array shows the expression of genes (horizontal rows) that are associated with different types of bone marrow progenitor cells (vertical columns). Part of a study published Aug. 31 by Nature, the image was produced from a software program called Iterative Clustering and Guide-Gene Selection, developed by researchers at Cincinnati Children’s. It gives scientists an unbiased way to identify developing cells in various intermediate states and discover new cellular intermediates. Yellow indicates highly expressed genes in particular cells, while blue indicates low or no expression. The study addresses a fundamental question of developmental biology – the nature of intermediate cell states and the regulatory gene networks that cause cell-type specification.

Newswise — CINCINNATI – Developing blood cells are caught in tugs of war between competing gene regulatory networks before finally deciding what type of cell to become, according to a study published Aug. 31 in Nature.

Researchers at Cincinnati Children’s Hospital Medical Center report that as developing blood cells are triggered by a multitude of genetic signals firing on and off, they are pulled back and forth in fluctuating multi-lineage states before finally becoming specific cell types. Although the scientists still don’t understand exactly what ques the cells to an eventual fate, their work suggests that competing gene networks induce dynamic instability, resulting in mixed-lineage states that are necessary to prime newly forming cells for that decision.

“It is somewhat chaotic but from that chaos results order. It’s a finding that helps us address a fundamental question of developmental biology – what are the nature of the intermediate states and the networks of regulatory genes that underlie cell-type specification,” said Harinder Singh, PhD, study co-author and Director of Immunobiology and the Center for Systems Immunology at Cincinnati Children’s.

Although the findings require extensive additional study to better understand the back-and-forth nature of this genetic process, the research may eventually provide new insights into developmental miscues that cause disease, according to H. Leighton Grimes, PhD, study co-author and Investigator in the Divisions of Immunobiology and Experimental Hematology and Cancer Biology at Cincinnati Children’s.

“How do blood cells know to become neutrophils or monocytes?” Grimes asked. “Two thirds of your bone marrow is taken up with this activity and the number of cells has to be exquisitely balanced. Too many or too few of either can kill you.”

In the current study the research team looked specifically at the formation of neutrophil and monocyte (macrophage) blood cells – critical components of the immune system. The researchers studied mouse cells as they developed in a natural state using a new and rapidly expanding technology called single-cell RNA sequencing – which identifies the genetic expression programs of individual cells and their presumptive regulators.

ICGS (http://www.altanalyze.org) takes the additional step of giving researchers an intuitive platform that can process and analyze all of the sequencing and biological data to identify the various transitioning or shifting genomic and cellular states of cells – in this instance developing blood cells.

Prior to the current study it already had been proposed that neutrophil and macrophage blood cells result from a bi-stable gene regulatory network (one that can manifest either of two stable states). But the different cellular transition states and underlying molecular dynamics of development have remained unknown.

Repeatedly working back and forth between laboratory biology and computational analysis, authors of the current paper say their analysis of developing blood cells captured a prevalent mixed-lineage intermediate. These intermediates expressed a combination of genes including those typical of stem cells that can give rise to all blood cell types as well as some genes that are specific for red blood cells, platelets, macrophages and neutrophils. This seemed to reflect competing genetic programs.

The research team also found the developing cells moving through a rare state where they encountered turbulence termed “dynamic instability.” This was seen to be caused by two counteracting myeloid gene regulatory networks. Two key components of the counteracting gene networks were Irf8 and Gfi1, genes that are involved in blood cell formation. Both genes encode transcription factors, which means that their protein product controls what genetic information is used in the formation of a cell. When Irf8 and Gfi1 were eliminated from the picture, researchers showed that the rare cells could be trapped in an intermediate state.

As they continue their research, the authors want a clearer understanding of what finally causes cells in intermediate states of dynamic instability to assume specific fates. They suggest that the influence of two simultaneous and counteracting gene networks generates internal oscillations that are eventually stabilized by unknown mechanisms to generate one of two different cell fates.

About Cincinnati Children’sCincinnati Children’s, a non-profit, pediatric, academic medical center established in 1883, is internationally recognized for improving child health and transforming delivery of care through fully integrated, globally recognized research, education and innovation. It is one of the top three recipients of pediatric research grants from the National Institutes of Health, ranked third in the nation among all Honor Roll hospitals in U.S. News and World Report’s Best Children’s Hospitals, and a research and teaching affiliate of the University of Cincinnati’s College of Medicine. Its patient population includes the eight-county primary service area covering parts of Ohio, Kentucky and Indiana. A destination for children with complex medical conditions, it also served patients from all 50 states and nearly 70 countries during the past year. Additional information can be found at www.cincinnatichildrens.org. Connect on the Cincinnati Children’s blog, via Facebook and on Twitter.