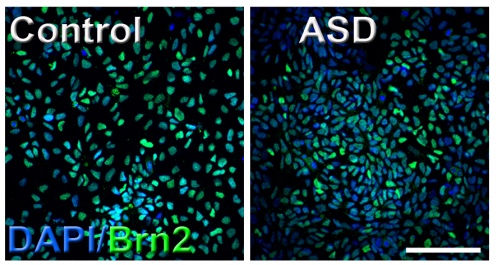 Newswise — Brain cells grow faster in children with some forms of autism due to distinct changes in core cell signaling patterns, according to research from the laboratory of Anthony Wynshaw-Boris, MD, PhD, chair of the department of genetics and genome sciences at Case Western Reserve University School of Medicine. Rapid cell growth can cause early brain overgrowth, a common feature in 20-30% of autistic children. But, the genetics of autistic children vary making it difficult to pinpoint common mechanisms underlying the disease.

“Autism is a complex disorder with multiple genetic and non-genetic factors,” explained Wynshaw-Boris. “Because the causes are diverse, it may help to define a subset of patients that have a common [symptom], in this case early brain overgrowth.”

In a study published in Molecular Psychiatry, Wynshaw-Boris and his colleagues started with skin cell samples from autistic children with enlarged brains and worked backward. Researchers in the laboratory “reprogrammed” donated skin cells to produce cells found in the developing brain including induced pluripotent stem cells and neural progenitor cells. Stem and progenitor cells are important therapeutic tools as they have the potential to grow into a multitude of cell types. The researchers hypothesized that even though the children in the study had different forms of autism, the precursor cells could be used to find common molecular and cellular mechanisms.

The researchers discovered that cells derived from autistic donors grew faster than those from control subjects and activated their genes in distinct patterns. Genes related to cell growth were unusually active, leading to more cells but fewer connections between them. This can cause faulty cell networks unable to properly transmit signals in the brain and enlarged heads during early development.

The researchers identified abnormal genes in the cells grown from autistic donors as belonging to the Wnt signaling pathway. The Wnt genes are critical for cell growth and serve as central players in cell networks, interfacing with multiple signaling pathways. Wynshaw-Boris previously identified the Wnt pathway as related to autism in mouse models of the disease. In a separate study published in Molecular Psychiatry earlier this year, the Wynshaw-Boris laboratory showed mice lacking Wnt genes display autism-like symptoms including social anxiety and repetitive behavior. The researchers could prevent these adult symptoms by treating the mice with medications that activate Wnt signaling in the uterus, during development.

“The Wnt pathway is one of the core developmental pathways conserved from invertebrates to humans. Our studies solidify previous suggestions that this pathway has a role in autism,” said Wynshaw-Boris.

Once they identified the dysfunctional signaling pathway in their reprogrammed autistic samples, the researchers (including the laboratories of Alysson Muotri, PhD at the University of California San Diego and Fred Gage, PhD at the Salk Institute) attempted to correct it by exposing mature nerve cells derived from autistic donors to drug compounds. One drug currently being tested in clinical trials for autism is insulin growth factor 1 (IGF-1). When the researchers added IGF-1 to nerve cells derived from autistic donors, neural networks were reestablished. It is unclear whether the positive effects of IGF-1 were on the Wnt pathway, and the exact compensatory mechanism requires further investigation.

Wynshaw-Boris’s studies in cell culture and mouse models of autism confirm improper Wnt signaling can lead to rapid brain cell growth and brain enlargement in the embryo, resulting in abnormal social behavior after birth. The next step will be to determine which genes are most impacted by Wnt signaling defects during early development, and how these changes result in abnormal behavior. “We would also like to find other drugs or compounds that may slow down the growth of the cells in tissue culture,” said Wynshaw-Boris. Together, these findings may help researchers unravel common ways brain cells can become impaired during early development in carefully chosen subsets of patients and contribute to symptoms across the autism spectrum.

The published research findings were also featured in Spectrum, an online news source from the Simons Foundation for Autism Research Initiative.