Changing the Color of Single Photons in a Diamond Quantum Memory 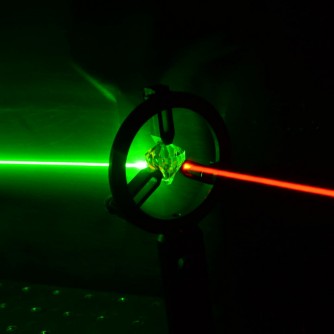 This is an artist's impression of quantum frequency conversion in a diamond quantum memory. Researchers from the Institute for Quantum Computing at the University of Waterloo and the National Research Council of Canada (NRC) have, for the first time, converted the colour and bandwidth of ultrafast single photons using a room-temperature quantum memory in diamond.

Newswise — Researchers from the Institute for Quantum Computing at the University of Waterloo and the National Research Council of Canada (NRC) have, for the first time, converted the colour and bandwidth of ultrafast single photons using a room-temperature quantum memory in diamond.

Shifting the colour of a photon, or changing its frequency, is necessary to optimally link components in a quantum network. For example, in optical quantum communication, the best transmission through an optical fibre is near infrared, but many of the sensors that measure them work much better for visible light, which is a higher frequency. Being able to shift the colour of the photon between the fibre and the sensor enables higher performance operation, including bigger data rates.

The research, published in Nature Communications, demonstrated small frequency shifts that are useful for a communication protocol known as wavelength division multiplexing. This is used today when a sender needs to transmit large amounts of information through a transmission so the signal is broken into smaller packets of slightly different frequencies and sent through together. The information is then organized at the other end based on those frequencies.

In the experiments conducted at NRC, the researchers demonstrated the conversion of both the frequency and bandwidth of single photons using a room-temperature diamond quantum memory.

"Originally there was this thought that you just stop the photon, store it for a little while and get it back out. The fact that we can manipulate it at the same time is exciting," said Kent Fisher a PhD student at the Institute for Quantum Computing and with the Department of Physics and Astronomy at Waterloo. "These findings could open the door for other uses of quantum memory as well."

The diamond quantum memory works by converting the photon into a particular vibration of the carbon atoms in the diamond, called a phonon. This conversion works for many different colours of light allowing for the manipulation of a broad spectrum of light. The energy structure of diamond allows for this to occur at room temperature with very low noise. Researchers used strong laser pulses to store and retrieve the photon. By controlling the colours of these laser pulses, researchers controlled the colour of the retrieved photon.

"The fragility of quantum systems means that you are always working against the clock," remarked Duncan England, researcher at NRC. "The interesting step that we've shown here is that by using extremely short pulses of light, we are able to beat the clock and maintain quantum performance."

The integrated platform for photon storage and spectral conversion could be used for frequency multiplexing in quantum communication, as well as build up a very large entangled state - something called a cluster state. Researchers are interested in exploiting cluster states as the resource for quantum computing driven entirely by measurements.

"Canada is a power-house in quantum research and technology. This work is another example of what partners across the country can achieve when leveraging their joint expertise to build next-generation technologies," noted Ben Sussman, program leader for NRC's Quantum Photonics program.

About the University of Waterloo

University of Waterloo is Canada's top innovation university. With more than 36,000 students we are home to the world's largest co-operative education system of its kind. Our unmatched entrepreneurial culture, combined with an intensive focus on research, powers one of the top innovation hubs in the world. Find out more at uwaterloo.ca