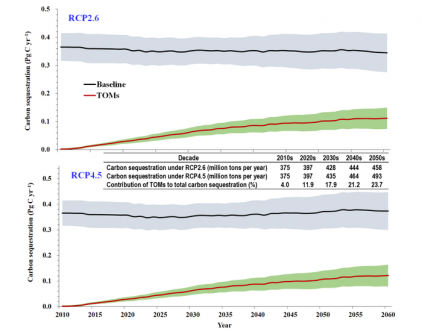 Newswise — President Xi of China announced in September 2020 that China will “aim to have CO2 emissions peak before 2030 and achieve carbon neutrality before 2060”. Although it is essential to reduce CO2 emissions from energy consumption, which accounts for more than 85% of the total annual CO2 emission in China, the role of terrestrial carbon sequestration cannot be underestimated in carbon neutrality.

A team led by Institute of Botany, Chinese Academy of Sciences, estimate the carbon sequestration in China’s terrestrial ecosystems, including forest, shrubland, grassland, cropland, and wetland, over the period 2010–2060. The implementation of target-oriented managements (TOMs) and CO2 fertilization effect are considered under two climate change scenarios. This estimation was made by synthesizing available findings and using several parameter-sparse empirical models that have been calibrated and/or fitted against contemporary measurements. They then evaluated the contribution of terrestrial carbon sequestration to offsetting energy-related CO2 emissions.