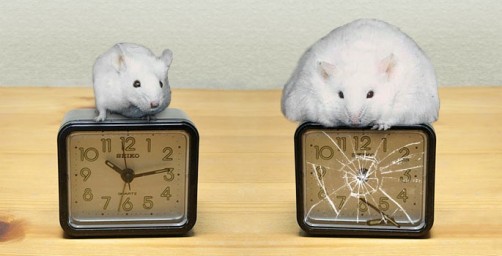 Newswise — NASHVILLE, Tenn. – Disruption in the body’s circadian rhythm can lead not only to obesity, but can also increase the risk of diabetes and heart disease.

That is the conclusion of the first study to show definitively that insulin activity is controlled by the body’s circadian biological clock. The study, which was published on Feb. 21 in the journal Current Biology, helps explain why not only what you eat, but when you eat, matters.

The research was conducted by a team of Vanderbilt scientists directed by Professor of Biological Sciences Carl Johnson and Professors of Molecular Physiology and Biophysics Owen McGuinness and David Wasserman.

“Our study confirms that it is not only what you eat and how much you eat that is important for a healthy lifestyle, but when you eat is also very important,” said postdoctoral fellow Shu-qun Shi, who performed the experiment with research assistant Tasneem Ansari in the Vanderbilt University Medical Center’s Mouse Metabolic Phenotyping Center.

In recent years, a number of studies in both mice and men have found a variety of links between the operation of the body’s biological clock and various aspects of its metabolism, the physical and chemical processes that provide energy and produce, maintain and destroy tissue. It was generally assumed that these variations were caused in response to insulin, which is one of the most potent metabolic hormones. However, no one had actually determined that insulin action follows a 24-hour cycle or what happens when the body’s circadian clock is disrupted.

Because they are nocturnal, mice have a circadian rhythm that is the mirror image of that of humans: They are active during the night and sleep during the day. Otherwise, scientists have found that the internal timekeeping system of the two species operate in nearly the same way at the molecular level. Most types of cells contain their own molecular clocks, all of which are controlled by a master circadian clock in the suprachiasmatic nucleus in the brain.

“People have suspected that our cells’ response to insulin had a circadian cycle, but we are the first to have actually measured it,” said McGuinness. “The master clock in the central nervous system drives the cycle and insulin response follows.”

Insulin, which is made in the pancreas, plays a key role in regulating the body’s fat and carbohydrate metabolism. When we eat, our digestion breaks down the carbohydrates in our food into the simple sugar glucose, which is absorbed into the blood stream. Too much glucose in the blood is toxic, so one of insulin’s roles is to stimulate transfer of glucose into our cells, thereby removing excess glucose from the blood. Specifically, insulin is required to move glucose into liver, muscle and fat cells. It also blocks the process of burning fat for energy.

Insulin action – the hormone’s ability to remove glucose from the blood – can be reduced by a number of factors and is termed insulin resistance. The study found that normal "wild-type" mouse tissues are relatively resistant to insulin during the inactive/fasting phase whereas they become more sensitive to insulin (therefore better able to transfer glucose out of the blood) during the high activity/feeding phase of their 24-hour cycle. As a result, glucose is converted primarily into fat during the inactive phase and used for energy and to other tissue building during the high activity phase.

“That is why it is good to fast every day...not eat anything between dinner and breakfast,” said Johnson.

The researchers also examined what happened to insulin action when the circadian clocks of individual mice are disrupted.

One approach that they used was to study special “knock-out” mice that had one of the genes necessary for proper biological clock function removed. They found these mice appeared to be locked in an insulin-resistant mode around the clock comparable to the inactive/fasting phase. After feeding on a high-fat diet, they tended to gain more weight and carry more fat than wild-type mice. However, supplying them with the protein produced by the missing gene re-established their circadian rhythm, reduced their insulin resistance and prevented them from gaining excess fat.

Another approach was to place normal "wild-type" mice in a constantly lit environment that disrupted their circadian cycle. In this case, they found the mice were locked in the inactive/fasting phase, developed a higher proportion of body fat and gained more weight on a high-fat diet than wild-type mice despite actually eating less food. Obesity and the insulin resistance that accompanies it, increases the risk of diabetes and cardiovascular disease.

According to the researchers, this helps explain the increased frequency of obesity and diabetes among night-shift workers and people suffering from disruption of their clocks and normal sleep patterns.

The researchers also found that high-fat diets disrupted the circadian clock of wild-type mice living in a normal day/night cycle. As a result, their insulin cycle defaulted to the inactive/fasting phase, which helps explain why high-fat diets lead to weight gain.