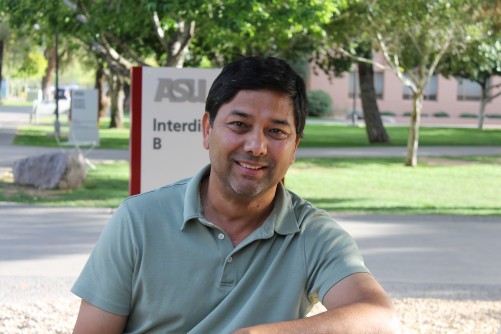 Netra Chhetri, professor in the School of Urban Planning and Geographical Sciences at Arizona State University, and University of Leeds Professor Andy Challinor report that crop yields will be negatively affected by climate change much earlier than expected in the journal Nature Climate Change.

Newswise — Results from a new study co-authored by Netra Chhetri, a faculty member with the Consortium for Science, Policy & Outcomes at Arizona State University, show global warming of only two degrees Celsius will be detrimental to three essential food crops in temperate and tropical regions. And beginning in the 2030s, yields from those crops will start to decline significantly.

“This study has been able to quantify the likely impacts of differing degrees of climate change on yields, by crop and by region,” said Chhetri. “In general, Sub-Saharan Africa and South Asia showed significant yield reductions for the second half of the century.”

In the study, the researchers created a new data set by compiling the results from 1,700 published simulations to evaluate yield impacts of climate change with and without adaptations for rice, maize and wheat. Due to increased interest on the impacts of climate change in global food security, the study was able to create the largest dataset to date on crop responses, with more than double the number of studies that were available for researchers to analyse for the previous IPCC Assessment Report in 2007. “One of the most important findings of this study is that adaptation may not be as effective for rice and maize as it is for wheat,” said Chhetri.

The research paper, 'A meta-analysis of crop yield under climate change and adaptation', published March 16 by the journal Nature Climate Change, feeds directly into the Working Group II report of the Intergovernmental Panel on Climate Change (IPCC) Fifth Assessment Report, which is due to be published at the end of March 2014. In the Fourth Assessment Report, to which Chhetri was a contributing author, scientists reported that regions of the world with temperate climates, such as Europe and most of North America, could withstand a couple of degrees of warming without a noticeable effect on harvests, or possibly even benefit from a bumper crop.

With more data available now, researchers see a shift in consensus. “Our research shows that crop yields will be negatively affected by climate change much earlier than expected. Furthermore, the impact of climate change on crops will vary both from year-to-year and from place-to-place—with the variability becoming greater as the weather becomes increasingly erratic,” said University of Leeds Professor Andy Challinor, lead author of the study.

The researchers conclude that, on aggregate, we will see an increasingly negative impact of climate change on crop yields from the 2030s onward. The impact will be greatest in the second half of the century, when decreases of over 25 percent will become increasingly common.

These statistics account for possible adaptation techniques by farmers to mitigate the effects of climate change, such as adjustments in the crop variety and planting date. Later in the century, greater agricultural transformations and innovations will be needed in order to safeguard crop yields for future generations.

“Climate change means a less predictable harvest, with different countries winning and losing in different years. The overall picture remains negative, and we are now starting to see how research can support adaptation by avoiding the worse impacts,” said Challinor.

Netra Chhetri is a professor in the School of Urban Planning and Geographical Sciences. The school and the Consortium for Science, Policy & Outcomes are research units in the College of Liberal Arts and Sciences at Arizona State University