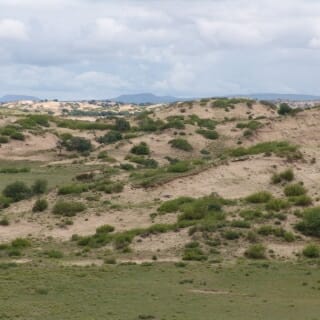 Neighboring dunes in the Otindag dune field in northern China can remain stable in what appear to be opposing states — bare and active sand or stabilized by plant cover — due to subtle, hyper-local differences.

Newswise — MADISON — Sand dunes, like many ecosystems, have more than one comfort zone. Variations in moisture, especially, can shift them from active, blowing waves of dry sand to rolling mounds with soils held down by grass and low shrubs.

But those changes are not always smooth and uniform, and new research on dunes in China describes how even neighboring dunes can long remain in different and seemingly conflicting states — confounding the assessment of stabilization efforts and masking the effects of climate change.

For more than 15 years, University of Wisconsin–Madison geography professor Joe Mason and researchers at Nanjing University, China, have worked to date layers of sand and soils at dune sites across more than 1,000 kilometers in northern China. They compared their results to records of temperature and rainfall. Working with ecologists who have studied other dryland ecosystems, they published their analysis of 144 study sites today in the journal Science Advances.

“At each site we can reconstruct times when the dunes were active and bare at that location and when they were vegetation-stabilized,” says Mason. “We can show that there was this kind of patchwork of active and stable sand going back over the past 12,000 years.”

At the beginning of that time period, the Mu Us, Otindag, and Horqin dune fields were almost uniformly bare sand, but over about five millennia the region’s annual precipitation increased by nearly half. By about 6,000 years ago, almost all the dune fields were carpeted — and protected from wind erosion — by plants.

In the last 6,000 years, estimated precipitation has fallen back to annual rates similar to those from 12,000 years ago, and all but about 35 percent of the dunes have returned to sandy states. But the changes have been anything but uniform.

“There's change over time in the proportion of active, sandy sites, but not a pattern spatially within the dune fields that we can relate to climate,” Mason says. “If there was a single threshold, or just a gradual transition from one state to another, we'd expect to see the whole dune field move fairly quickly from one state to another and back as climate changed. Instead we see each local site kind of doing its own thing in terms of when it switches from active to stable.”

To change a bare, active dune into one stabilized by grass and shrubs requires more moisture than the switched dune needs to maintain the stabilized state. Similarly, it takes a sharper dry shock to remove vegetation and turn a dune into active sand than it takes to keep it from re-growing plant cover.

“There are feedbacks that tend to keep the system in a particular state,” says Mason, whose work was funded by the U.S. National Science Foundation. “For example, an active, sandy dune is an extra hard place for a seed to settle and germinate and spread. And when dust falls out of the air onto a vegetation-stabilized dune, it gets trapped under the plants and helps hold in more moisture and keep those plants in place.”

Combined with those feedbacks, local factors — differences in the size of sand grains, elevation above the water table, a human disturbance or particularly strong winds — can be powerful enough on a local scale to keep a group of dunes in one stable state while all its neighbors flip.

“Rainfall is typically patchy and highly spatially variable, especially in a dry region like this,” Mason says. “So, one major rainstorm might allow a patch that was under that storm to survive through a short dry period that triggers a shift to sand activity in lots of other patches around it.”

Though the region is sparsely populated, the Chinese government has invested since the 1970s in projects meant to stabilize the dunes. Sprawling grids of plants or sticks jabbed into the ground are meant to keep blowing sand from swallowing stretches of highway, ranchland and train tracks.

Patchy changes can also mask the expected effects of rapid changes in climate.

“Today, you could argue that the dunes are more stable than they should be relative to where they were 12,000 years ago when the estimated precipitation was actually slightly higher,” Mason says. “Partly because climate change is also slowing wind speeds in this region, there are areas that haven’t hit that tipping point to become the active, sandy dunes we might expect.”