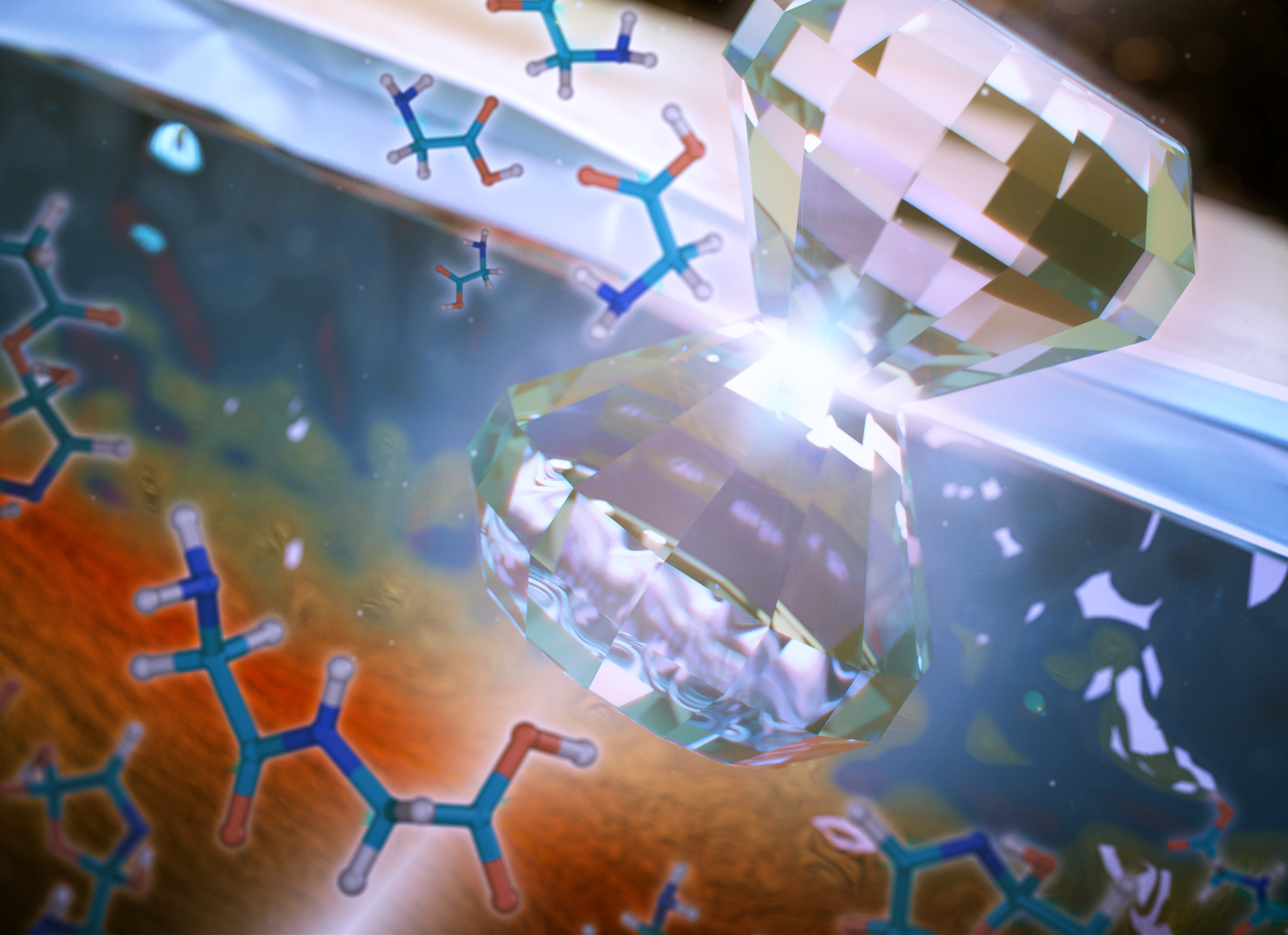 A new computational model of rotational diamond anvil cell experiments predicts that compressive shearing forces exerted by the tidal pull of Jovian planets on moons like Europa and Enceladus may form a natural reactor for prebiotic chemistry in their rocky ice-covered crusts.

Newswise — Massive compressive shearing forces generated by the tidal pull of Jupiter-like planets on their rocky ice-covered moons may form a natural reactor that drives simple amino acids to polymerize into larger compounds. These extreme mechanical forces strongly enhance molecule condensation reactions, opening a new arena of possibilities for the chemical origins of life on Earth and other rock planets.

That is the conclusion of a new study by Lawrence Livermore National Laboratory (LLNL) scientists who explored the hypothesis that compressive shearing may have driven prebiotic chemistry. The research appears in the journal Chemical Science and is featured on the cover of the 30th issue and as part of the 2020 Chemical Science HOT Article Collection.

Mechanically driven chemistry, or mechanochemistry, is a relatively new field. “Compressive shearing forces are known to accelerate physical and chemical transformations in solid materials,”  said LLNL chemist Brad Steele, lead author on the study, “but little is known about how these processes occur especially for simple prebiotic molecules like amino acids, which can have a propensity to link together.”

As a test case, the team focused on glycine, the simplest protein-forming amino acid and a known constituent of astrophysical icy bodies. “We chose to study glycine because it is a useful reductionist model for understanding the fundamentals of mechanochemical polypeptide synthesis,” said LLNL scientist Nir Goldman, one of the authors on the study.

To probe chemistry under such unusual conditions, the team developed a new computer modeling approach based on laboratory experiments. Diamond anvil cells (DACs) are an established experimental tool to access extremely high pressures by compressing a sample between two diamonds. Rotational DACs (or RDACs) add a shearing component by rotating one of the diamonds. “We developed a virtual RDAC to enable rapid computational chemistry simulations of mechanochemistry,” said LLNL chemist Matt Kroonblawd, who designed and coordinated the study.

Through many computer simulations of glycine in a virtual RDAC, a clear picture began to emerge. Above a certain pressure, every shearing simulation predicted the formation of large polymeric molecules. Among these was the simplest polypeptide: glycylglycine. A host of other complex molecules also were found including cyclic ones and ones with chiral centers. “Our study revealed a surprisingly complex chemistry coming from such a simple molecule,” said LLNL scientist Will Kuo, one of the authors.

The work points to compressive shearing forces as a potential driver for new and unusual chemistries in organic materials. Compressive shearing conditions are reached in many situations, such as in shocks, detonations, and in materials under large strains. The virtual RDAC methodology will enable making rapid predictions of mechanochemistry for other materials under such conditions.

This work was supported by the LLNL Laboratory Directed Research and Development Program with LLNL’s scientist Elissaios Stavrou as principal investigator.