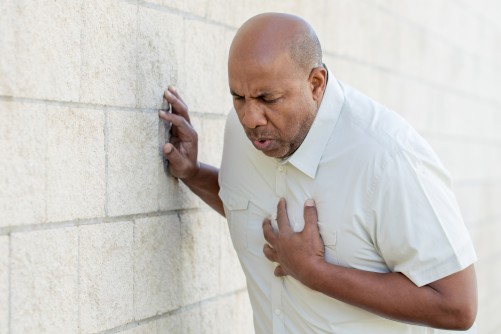 Newswise — ATS 2017, WASHINGTON, DC ─ After an acute exacerbation of chronic obstructive pulmonary disease, or COPD, people with a history of cardiovascular disease (CVD) or people at risk for CVD appear more likely to suffer a heart attack or stroke, according to new research presented at the ATS 2017 International Conference.

“Previous studies have shown that lower lung function, such as occurs with  COPD,  is a risk factor for cardiovascular disease,”  said Ken M. Kunisaki, MD, MS, lead study author and associate professor of medicine at the University of Minnesota and Minneapolis VA Health Care System.

“One theory for why this happens is that COPD triggers inflammation and that, in turn, leads to CVD,” he added. “Because COPD exacerbations lead to particularly high levels of inflammation, we wondered if these exacerbations would be linked to higher rates of CVD events.”

The researchers analyzed data from the Study to Understand Mortality and MorbidiTY (SUMMIT) trial. SUMMIT enrolled current and former smokers between the ages of 40 and 80 who had CVD or multiple risk factors for CVD and whose forced expiratory volume in one second (FEV1) was 50-70 percent of predicted and whose FEV1/forced vital capacity (total volume of exhalation) was ≤ 70 percent.

Their findings have led the researchers to consider interventions they might study following a COPD exacerbation in patients with CVD.

“One approach might be to study currently used cardiac medications, such as antiplatelet agents, statins and/or beta-blockers immediately following COPD exacerbations,” Dr. Kunisaki said. “Another approach might be to use experimental drugs that specifically reduce inflammation.”

Until effective interventions are identified, he added, patients who have recently experienced a COPD exacerbation “should pay attention to and seek immediate care” for symptoms of heart attack, such as chest pain and sudden worsening of shortness of breath, and stroke, including weakness of one limb, sudden changes in vision and the inability to speak clearly.

Care providers, he said, should be particularly aware of the risk of a CVD event in patients seeking acute medical care following a COPD exacerbation.

Study limitations include the fact that all patients in the study had a CVD history or multiple risk factors for CVD. It is not known if COPD exacerbations would pose the same risk of a CVD in patients with no or lower CVD risk.

Rationale: Ischemic heart disease, stroke, and chronic obstructive pulmonary disease (COPD) are the three leading causes of death globally. COPD and lower forced expiratory volume in 1 second (FEV1) are considered risk factors for cardiovascular disease (CVD). The mechanisms explaining this association are not clear, but COPD is often associated with increased concentrations of circulating inflammatory biomarkers, especially during acute exacerbations of COPD (AECOPD). We hypothesized that among patients with COPD, periods following AECOPD would be associated with higher risk for subsequent CVD events compared with time periods free of AECOPD. We tested this hypothesis in a large (n=16,485), international cohort that collected AECOPD data and adjudicated CVD events.

Methods: We analyzed data post hoc from participants in the Study to Understand Mortality and MorbidITy (SUMMIT) trial that enrolled current or former smokers, aged 40–80 years, with FEV1/forced vital capacity ≤0.70, FEV1 50%-70% of predicted, and with a history of CVD or with an increased risk of CVD. For this analysis, our primary interest was CVD events (cardiovascular death, myocardial infarction, stroke, unstable angina, and transient ischemic attack) as determined by a blinded adjudication committee. We used a Cox model with a time- dependent covariate for AECOPD events (defined as symptomatic deterioration requiring treatment with antibiotics or systemic corticosteroids). While controlling for other risk factors we analyzed the hazard of CVD events at 1-30 days, 31 days-1 year, and >1 year following AECOPD events. Our primary analysis included data from all four SUMMIT arms (placebo, fluticasone furoate, vilanterol, fluticasone furoate + vilanterol), but additional sensitivity analyses restricted the model to individual study arms.