WCS created this animation to show how the program works 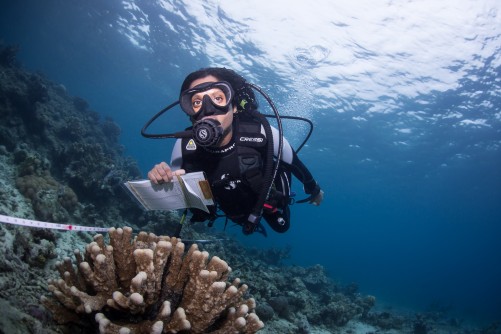 Savvy divers with just a pencil and an underwater slate can now participate in a WCS-led initiative to record coral bleaching observations around the world.

Scientists Seek Help from Knowledgeable Divers around the World

• In 2016, more than 50 percent of the 70,000 coral colonies across 13 countries were bleached• Two levels of participation: citizen scientists and coral scientists • Templates and instructions can be downloaded here• See how it works here

Newswise — NEW YORK, (March 21, 2017) – Savvy divers with just a pencil and an underwater slate can now participate in a WCS-led initiative to record coral bleaching observations around the world. A rapid-assessment downloadable template is now available that allows observers to record and share data needed to understand bleaching and the species and reefs that require management to protect their future.

The survey method was first developed following a large-scale bleaching event in 1998. Following last year’s global-level bleaching, participation and interest has increased with 300 surveys completed by a dozen participating institutions assessing 70,000 coral colonies in 13 countries. The results show that 56 percent of observed corals were bleached during peak temperatures in 2016.

However, some reefs and species escaped bleaching, and understanding the environmental factors that saved these “reefs of hope” is high priority for the scientists leading the crowd-sourcing effort.

Said Dr. Emily Darling, WCS Associate Conservation Scientist and University of Toronto Banting Postdoctoral Fellow: “Tracking ongoing coral bleaching events is a global challenge; bringing together datasets from researchers and citizen scientists can help find and protect 'reefs of hope’. These locations can buy time for corals to survive climate change, and can be global priorities for conservation.”

Surveys track the impacts of increasing ocean temperature disturbances that cause coral bleaching. WCS works with coral reef stakeholders to identify how corals cope with a changing climate and implements sustainable management, marine reserves, and conservation planning where efforts are most needed.

Using a pencil, diving slate, and a basic knowledge of corals, scientists and citizen scientists can use a downloadable standardized template to record bleaching observations at two levels of familiarity with corals. Coral bleaching observations should be made a few weeks after the peak summer water temperatures, and the coral reef location, date, site name, and information on the abundance and bleaching severity of corals should be recorded. For those familiar with coral genera, the bleaching of each colony is scaled by the intensity of the bleaching in haphazardly selected fields of vision. For those who cannot identify corals, there is a simpler method that allows participation by scaling how white corals has become. This overview describes this information in more detail. In addition, WCS has created an animation describing the program. The data template also produces a “ReefBase” standard bleaching severity level of 0-4, which can be added to a global observation record at NOAA’s Coral Reef Watch.

Said Dr. Tim McClanahan, WCS Senior Conservation Zoologist: “The more eyes and ears we have assessing coral reefs the more we can learn about how to save them. We are learning that bleaching is widespread and affects many species, but that there are also species and reefs that can persist if other human disturbances do not overwhelm them. We hope a larger community of caring and knowledgeable people will take up this rapid response to help save the Earth’s most beautiful ecosystem.”

Surveys were completed by WCS and more than 15 collaborating institutions, and were supported by the John D. and Catherine T. MacArthur Foundation, The Tiffany & Co. Foundation, the VILLUM Foundation, and ANR-STORISK.

The timing of this WCS initiative, and the call for more engagement among the diving community to help survey reefs globally, coincides with a growing awareness on the immediate threats facing coral reef ecosystems, and a global commitment to address those threats. Last month, at the Economist World Ocean Summit in Bali, Indonesia, the ‘50 Reefs’ initiative was launched by the Global Change Institute of the University of Queensland and the Ocean Agency. The initiative brings together leading ocean, climate and marine scientists to develop a list of the 50 most critical coral reefs to protect, whilst leading conservation practitioners are working together to establish the best practices to protect these reefs.