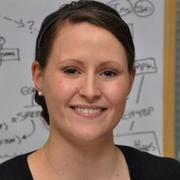 Newswise — Estrogen-positive breast cancers are often treated with anti-estrogen therapies. But about half of these cancers contain a subpopulation of cells marked by the protein cytokeratin 5 (CK5), which resists treatment — and breast cancers with higher CK5 expression have poorer prognosis. These cells, which have characteristics of stem cells, often survive treatment to drive or even restart cancer growth. Previous work has shown that retinoic acid, a chemical that results from the body’s natural breakdown of vitamin A, should act against these CK5+ cells, but clinical trials of retinoids against breast cancer have been largely unsuccessful.

Now a University of Colorado Cancer Center study published online ahead of print in the journal Oncogene offers compelling evidence explaining this failure and offering a possible strategy for the use of retinoic acid or other retinoids against some breast cancers: Because early clinical trials are often offered to patients who have already tried other more established therapies, breast cancer cells may have been pushed past an important tipping point that offers retinoic acid resistance. The study implies that perhaps if retinoic acid were used earlier in the course of treatment, resistance may be lower and this promising but unproven strategy may show more success.

The complex finding takes place in the context of the hormones estrogen and progesterone. Previous work in the lab of CU Cancer Center investigator, Carol Sartorius, PhD, and others shows that progesterone aids the expansion of CK5+ cells. This work also shows that retinoids block the ability of progesterone to increase CK5+ cell numbers. The answer seems simple: Treatment with retinoids should block the progesterone-aided expansion of this dangerous subpopulation of CK5+ cells. It works in cell studies and in mouse studies, but so far has proved frustratingly ineffective in human patients.

However, along with this seemingly linear storyline in which retinoids block progesterone’s promotion of CK5+ cells, previous work in the lab of CU Cancer Center investigator Peter Kabos, MD, and others shows that breast cancers treated with anti-estrogen drugs like tamoxifen or aromatase inhibitors show an increased population of CK5+ cells – it is as if these therapies remove the roadblock of estrogen-dependent cells, leaving CK5+ cells to proliferate. In other words, unfortunately, anti-estrogen therapies may kill estrogen-dependent cells but at the expense of spurring the growth of CK5+ cells.

In the current paper, first author Lynsey Fettig, doctoral candidate in the University of Colorado Denver Cancer Biology Program and the Sartorius lab, first wanted to confirm that CK5 was not only marking therapy-resistant breast cancer cells but was, in fact, contributing to this resistance.

“From there, we started diving into the retinoic acid side of things,” she says.

“Adding retinoids calls away retinoic acid receptors, which are then unable to aid transcription of the gene,” Fettig says.

Importantly, knowing the mechanism by which retinoids reduce CK5 activation now leads the team to a hypothesis that could stop this activation. When the team used the retinoid fenretinide along with anti-estrogen therapy in mouse models of breast cancer, they did not see the expansion of CK5+ cells previously seen with anti-estrogen therapy alone.

“What has been missing in clinical trials may just be the timing of the treatments,” Fettig says.

Previous trials of retinoids against breast cancer have been conducted only after anti-estrogen treatments, at which point, “we were already getting expansion of cancer stem cells – treating with a retinoid after that was already too late,” Fettig says. In support of this, fenretinide has been shown to be effective at preventing breast cancer recurrence in premenopausal women.

The current paper shows that treating with retinoids simultaneously with anti-estrogen therapies may pull cofactors for progesterone receptors away from their posts, disallowing their ability to open DNA at the point of CK5 and keeping the growth of dangerous CK5+ cells in check.