Profiles of Native American DNA in modern populations show patterns of migration across the U.S. 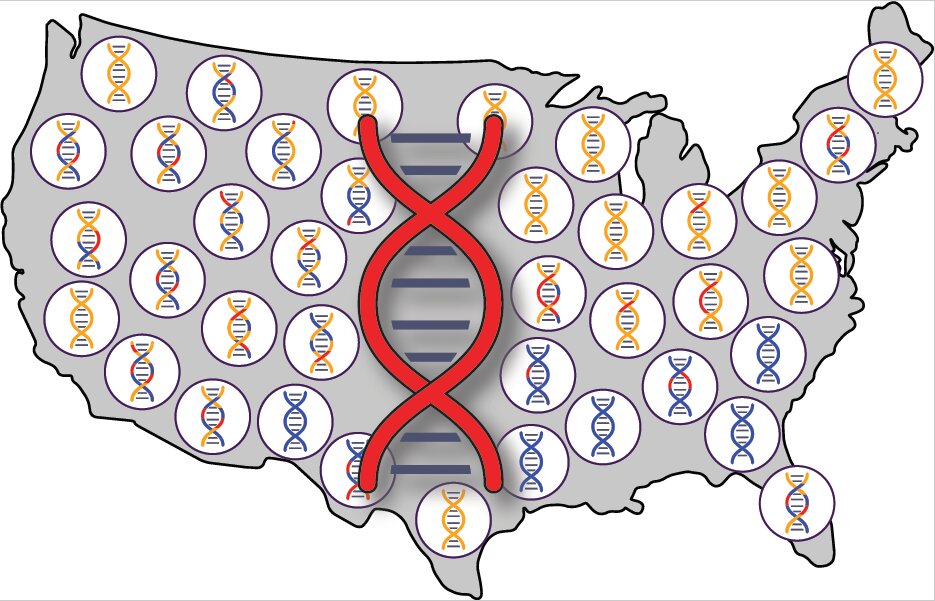 Newswise — Many people in the U.S. do not belong to Native American communities but still carry bits of Native American DNA, inherited from European and African ancestors who had children with indigenous individuals during colonization and settlement. In a new study published 19th September in PLOS Genetics, Andrew Conley of the Georgia Institute of Technology and colleagues investigate this genetic legacy and what it can tell us about how non-natives migrated across the U.S.

When Europeans colonized North America, infectious diseases and violent conflict greatly reduced the numbers of Native Americans living on the continent. Their DNA lives on, however, not only in recognized Native American tribes, but also in the descendants of Europeans and enslaved Africans that settled within the country. To better understand this genetic reservoir, researchers analyzed patterns of Native American ancestry from genomic data collected from descendants of African slaves, and Spanish and Western European settlers.

“The presence of Native American genetic ancestry among individuals who do not self-identify as Native American can also be leveraged to broaden genomic medicine and include population groups currently underserved and underrepresented in genomic databases,” said author Andrew Conley. “For future studies, we are very interested to use this rich genomic resource to study the distribution of health-related genetic variants in the Native American genomic background.”

Overall, the study shows that much of the genetic legacy of the original inhabitants of the area that is now the continental U.S. can be found in the genomes of the descendants of European and African immigrants to the region. By making use of large genomic databases, the new study adds insight into the current discussion of the meaning of Native American identity and its distinction from genetic ancestry.

In your coverage please use this URL to provide access to the freely available article in PLOS Genetics:

Funding: IKJ, LR, and ABC were supported by the IHRC-Georgia Tech Applied Bioinformatics Laboratory (ABiL). We can confirm that the funders had no role in study design, data collection and analysis, decision to publish, or preparation of the manuscript.