Despite Odds, Fish Species That Bypasses Sexual Reproduction Is Thriving

Success of asexual reproduction in Amazon molly an evolutionary anomaly

FOR THE FIRST TIME, AN INTERNATIONAL TEAM OF SCIENTISTS HAS SEQUENCED THE DNA OF A SMALL FISH THAT REPRODUCES ASEXUALLY. THE AMAZON MOLLY IS AN AQUARIUM-TYPE FISH THAT LIVES IN THE FRESH WATERS ALONG THE MEXICO-TEXAS BORDER. SCIENTISTS BELIEVE THAT OVER TIME, SPECIES THAT REPRODUCE WITHOUT SEX SHOULD GO EXTINCT, BUT THAT DOESN’T SEEM TO BE HAPPENING WITH THESE FISH. JIM DRYDEN HAS MORE… 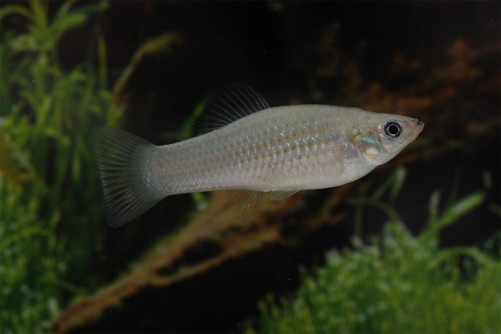 An international team of scientists has sequenced the genome of the Amazon molly, a fish that reproduces asexually. The researchers expected that the asexual organism would be at a genetic disadvantage, but the Amazon molly is thriving.

Newswise — The very rare animals that reproduce asexually — only about one in 1,000 of all living vertebrate species — are thought to be at an evolutionary disadvantage compared with their sexually reproduced counterparts. But that theory doesn’t hold true regarding the Amazon molly, an all-female fish species that has thrived for millennia in the fresh waters along the Mexico-Texas border.

To better understand how this fish’s reproduction deviates from the norm, an international team of scientists has sequenced the first Amazon molly genome and the genomes of the original parental species that created this unique fish. Their findings suggest that the molly’s thriving existence is not totally unexpected since they found the fish has a hardy genetic makeup that is often rare in nature and gives the animals some predicted survival benefits.

“It appears the stars aligned for this species,” said first author Wesley C. Warren, PhD, an assistant director at the McDonnell Genome Instituteat Washington University School of Medicine in St. Louis. “The hybridization of two different species’ genomes into one new one would require nearly perfect compatibility between the elements of those parent genomes to bypass the sexual reproduction practiced by most vertebrate species.”

The findings are published Feb. 12 in the journal Nature Ecology & Evolution.

Ever since scientists, in 1932, determined that the Amazon molly was the first known asexual vertebrate, they have wondered how this came to be.

One of the theories that spells out why asexual reproduction should stand in the way of a species’ sustainability is the idea that if no new DNA is introduced during reproduction, then harmful gene mutations can accumulate over successive generations, leading to eventual extinction. Another hypothesis states that because asexual reproduction limits genetic diversity within a species, the animals eventually become unable to adapt to changes in the environment.

“The expectation is that these asexual organisms are at a genetic disadvantage,” said Warren, also an assistant professor of genetics. “In nature, the Amazon molly is doing quite well.”

The researchers found that the Amazon molly resulted from a sexual reproduction event involving two different species of fish, when an Atlantic molly first mated with a Sailfin molly 100,000 to 200,000 years ago. Since then, the resulting Amazon molly has been a hybrid species that remarkably has remained frozen in evolutionary time — yet still continues to thrive.

“That’s about 500,000 generations if you calculate it out to the present day,” said Warren. “The expectation is that many harmful mutations would accumulate in that time, but that’s not what we found.”

The Amazon molly reproduces by “mating” with a male fish of a related species. But the male’s DNA is not incorporated into the offspring. Instead, mating with the male fish triggers the replication of the entire maternal genome. In essence, mollies clone themselves. They don’t lay eggs but instead give birth to large broods of live offspring.

Scientists have long theorized that clones, by failing to purge harmful mutations, should experience decay in the genome and eventual extinction over generations.

“This study caps an intensive, collaborative study, marking the first glimpse of the genomic features of an asexual vertebrate and setting up a platform for future molecular, cellular and developmental work in this interesting species,” said Michael Lynch, PhD, director of the Biodesign Center for Mechanisms of Evolution at Arizona State University.

So although the Amazon molly has thrived for thousands of years, it remains resistant to giving away its genomic secrets — for now.

“It may be that the Amazon molly has the best of both worlds,” said Manfred Schartl, professor and chair of biochemistry at the University of Wurzburg in Wurzburg, Germany. “It seems to have some advantages that we see in species that reproduce sexually and other advantages normally seen in species that produce offspring nonsexually, such as large population sizes”

Whatever the reasons, the researchers said the Amazon molly is an exception to ideas about the evolutionary disadvantages of asexual reproduction.