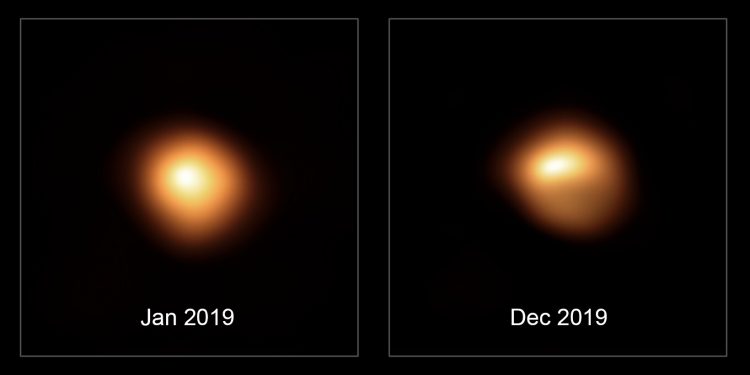 Observations of the star Betelgeuse taken by the ESO’s Very Large Telescope in January and December 2019, which show the star’s substantial dimming. 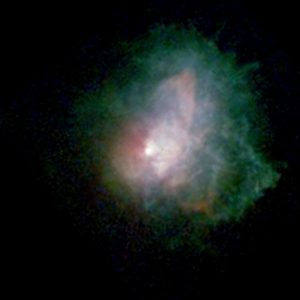 A visible-light image of VY Canis Majoris, a red supergiant star that is largely obscured by dust, taken in 2005.

A simulation of giant convection cells on a hypothetical red supergiant star. 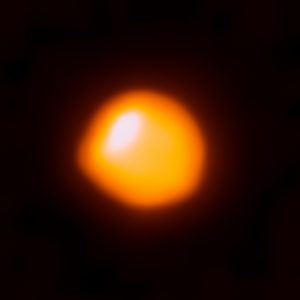 An image of Betelgeuse captured in 2017 by the Atacama Large Millimeter/submillimeter Array, showing probable convection cells at the surface.

Newswise — Late last year, news broke that the star Betelgeuse was fading significantly, ultimately dropping to around 40% of its usual brightness. The activity fueled popular speculation that the red supergiant would soon explode as a massive supernova.

But astronomers have more benign theories to explain the star’s dimming behavior. And scientists at the University of Washington and Lowell Observatory believe they have support for one of them: Betelgeuse isn’t dimming because it’s about to explode — it’s just dusty.

In a paper accepted to Astrophysical Journal Letters and published on the preprint site arXiv, Emily Levesque, a UW associate professor of astronomy, and Philip Massey, an astronomer with Lowell Observatory, report that observations of Betelgeuse taken Feb. 14 at the Flagstaff, Arizona, observatory allowed them to calculate the average surface temperature of the star. They discovered that Betelgeuse is significantly warmer than expected if the recent dimming were caused by a cooling of the star’s surface.

The new calculations lend support to the theory that Betelgeuse — as many red supergiant stars are prone to do — has likely sloughed off some material from its outer layers.

“We see this all the time in red supergiants, and it’s a normal part of their life cycle,” said Levesque. “Red supergiants will occasionally shed material from their surfaces, which will condense around the star as dust. As it cools and dissipates, the dust grains will absorb some of the light heading toward us and block our view.”

It is still true: Astronomers expect Betelgeuse to explode as a supernova within the next 100,000 years when its core collapses. But the star’s dimming, which began in October, wasn’t necessarily a sign of an imminent supernova, according to Massey.

One theory was that newly formed dust was absorbing some of Betelgeuse’s light. Another posited that huge convection cells within Betelgeuse had drawn hot material up to its surface, where it had cooled before falling back into the interior.

“A simple way to tell between these possibilities is to determine the effective surface temperature of Betelgeuse,” said Massey.

Measuring a star’s temperature is no straightforward task. Scientists can’t just point a thermometer at a star and get a reading. But by looking at the spectrum of light emanating from a star, astronomers can calculate its temperature.

“Emily and I had been in contact about Betelgeuse, and we both agreed that the obvious thing to do was to get a spectrum,” said Massey. “I already had observing time scheduled on the 4.3-meter Lowell Discovery Telescope, and I knew if I played around for a bit I would be able to get a good spectrum despite Betelgeuse still being one of the brightest stars in the sky.”

The light from bright stars is often too strong for a detailed spectrum, but Massey employed a filter that effectively “dampened” the signal so they could mine the spectrum for a particular signature: the absorbance of light by molecules of titanium oxide.

Titanium oxide can form and accumulate in the upper layers of large, relatively cool stars like Betelgeuse, according to Levesque. It absorbs certain wavelengths of light, leaving telltale “scoops” in the spectrum of red supergiants that scientist can use to determine the star’s surface temperature.

If one of these massive cells had risen to Betelgeuse’s surface, Levesque and Massey would have registered a substantially greater decrease in temperature than what they see between 2004 and 2020.

“A comparison with our 2004 spectrum showed immediately that the temperature hadn’t changed significantly,” said Massey. “We knew the answer had to be dust.”

Astronomers have observed clouds of dust around other red supergiants, and additional observations may reveal similar clutter around Betelgeuse.

Over the past few weeks, Betelgeuse has actually started to brighten again, albeit slightly. Even if the recent dimming wasn’t an indication that the star would soon explode, to Levesque and Massey, that’s no reason to stop looking.

“Red supergiants are very dynamic stars,” said Levesque. “The more we can learn about their normal behavior — temperature fluctuations, dust, convection cells — the better we can understand them and recognize when something truly unique, like a supernova, might happen.”

The research was funded by grants to Lowell Observatory, the Research Corporation for Scientific Advancement and the National Science Foundation.

Caption: Observations of the star Betelgeuse taken by the ESO’s Very Large Telescope in January and December 2019, which show the star’s substantial dimming.

Caption: A visible-light image of VY Canis Majoris, a red supergiant star that is largely obscured by dust, taken in 2005.

Caption: A simulation of giant convection cells on a hypothetical red supergiant star.

Caption: An image of Betelgeuse captured in 2017 by the Atacama Large Millimeter/submillimeter Array, showing probable convection cells at the surface.