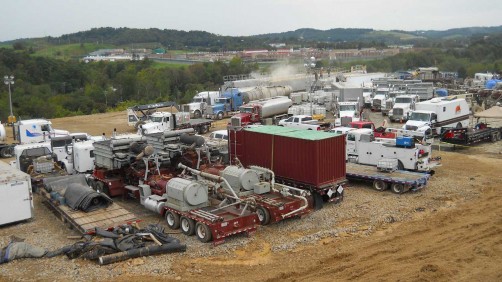 A fracking operation on the Marcellus Shale Formation in Pennsylvania. New research shows that abandoned oil and gas wells near fracking sites can be conduits for methane emissions not currently being measured.

Newswise — As debate roils over EPA regulations proposed this month limiting the release of the potent greenhouse gas methane during fracking operations, a new University of Vermont study funded by the National Science Foundation shows that abandoned oil and gas wells near fracking sites can be conduits for methane escape not currently being measured.

The study, to be published in Water Resources Research on October 20, demonstrates that fractures in surrounding rock produced by the hydraulic fracturing process are able to connect to preexisting, abandoned oil and gas wells, common in fracking areas, which can provide a pathway to the surface for methane. A recent paper published in the Proceedings of the National Academies of Science showed that methane release measured at abandoned wells near fracking sites can be significant but did not investigate how the process occurs.

"The debate over the new EPA rules needs to take into account the system that fracking operations are frequently part of, which includes a network of abandoned wells that can effectively pipeline methane to the surface,” said the new paper’s lead author, James Montague, an environmental engineering doctoral student at the University of Vermont, who co-wrote the paper with George Pinder, professor of environmental engineering at the university.

The study focused on an area in New York State underlain by the Marcellus Shale formation, which had been fracked until a ban went into effect in the state in the summer of 2015.

The formation, composed of layers of shale and hydrocarbons, is beneath land that has been the site of conventional oil and gas drilling since the 1880s, when American oil companies first began operating. About 40,000 existing wells in New York, 30,000 of them located within the footprint of the Marcellus formation, are documented by the state’s Department of Environmental Conservation. But the department estimates that 70,000 wells in all have been drilled. Because the location of so many wells is not known – a common phenomenon in many regions where fracking takes place – the study uses a mathematical model to predict the likelihood that the hydraulically induced fractures of a randomly placed new well would connect to an existing wellbore.

The model put the probability that new fracking-induced fractures in the Marcellus formation would connect to an existing well bore at between .03 percent and 3 percent. But industry-sponsored information made public since the paper was published vastly increased assumptions about the area impacted by a set of six to eight fracking wells known as a well pad – to two square miles -- increasing the probabilities cited in the paper by a factor of 10 or more.

While all fracking sites are different, most have a similar enough hydrocarbon profile that they attracted conventional oil and gas drilling in the past and most, like the Marcellus, have a large number of abandoned wells, many with unknown locations. Not all abandoned wells provide a pathway to surface for methane. Only those that are damaged, largely when the concrete that buffers the well from the surrounding earth loses integrity, can act as a conduit.

But even a small percentage of damaged wellbores, given the large number of abandoned wells, can potentially pose an environmental risk, Pinder said.