Finding could pave road to regrowth after traumatic injuries, stroke and spinal damage 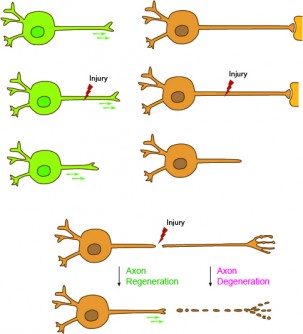 A cartoon depiction of axon injury and regeneration. 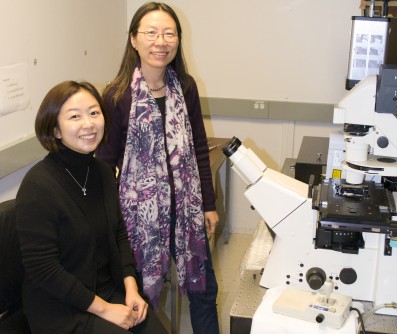 Newswise — On the hunt for genes involved in regenerating critical nerve fibers called axons, biologists at the University of California San Diego came away with a surprise: The discovery of a new genetic pathway that carries hope for victims of traumatic injuries—from stroke to spinal cord damage.

The discovery is published online Jan. 25, 2018 in the journal Neuron.

“This came as a total surprise,” said Jin, Chair of the Section of Neurobiology, Division of Biological Sciences, and a member of the Department of Cellular and Molecular Medicine in UC San Diego’s School of Medicine. “piRNA wasn’t anywhere on our radar, but now we are convinced that it is a new pathway that functions in neurons and, with some work, could offer therapeutic targets for helping neurons do better against injury.”

Axons are long, threadlike extensions of nerve cells that transmit electric and chemical signals from one cell to another. Jin’s research focuses on discovering new targets to help axons regenerate, especially from injuries thought to be irreversible such as in vehicle accidents, sports injuries, spinal cord damage and from stroke.

Although no cures exist for many of these injuries, if the damaged neurons do not die, “there is hope to find ways to make them stronger and help them regrow,” said Jin.

Jin and Kim said that piRNA was historically viewed as a defense mechanism for germ cells against transposable elements, with no role in the nervous system. After identification in their genetic screening, the researchers went on to study piRNA’s role in axon injuries through experiments using a femtosecond laser instrument, which emits ultrafast pulses to allow precise cuts in axons. When Kim first presented her data implicating piRNA in restricting axon growth, Jin said the results seemed improbable. Eventually the results proved irrefutable, especially when the researchers knocked out a fleet of genes necessary for piRNA production and found that a damaged roundworm axon regrew better.

“For us this finding is totally unexpected,” said Kim. “We are now investigating detailed mechanisms that regulate the pathway to inhibit axon regeneration, including identifying specifically which piRNA elements are involved and how they function in axon regrowth.”

The paper was coauthored by Ngang Heok Tang, Matthew Andrusiak, Zilu Wu and Andrew Chisholm of the Division of Biological Sciences.