Disguised as a Tuna, BioSwimmer Is Changing the Game for Underwater Inspections! 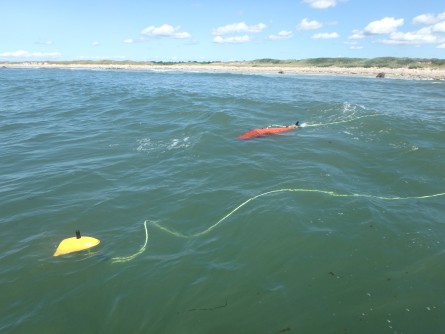 The BIOSwimmer is modeled after the tuna – one of nature's fastest and most agile fish – to maneuver in constricted areas inaccessible by other underwater vehicles. The BioSwimmer pictured is connected to a yellow towed antenna to transmit data immediately. The BioSwimmer also operates semi-autonomously.

Newswise — Robots are bringing an important layer of security to our ports, disguised as fish.

Developed by Boston Engineering and funded by the Department of Homeland Security (DHS) Science and Technology Directorate (S&T), the BioSwimmer is a semi-autonomous underwater vehicle equipped to inspect a vessel’s exterior for illicit cargo and contraband, as well as harbor facilities for unwanted activity.

We have seen a new wave of creative smuggling and targeted attacks, and the underwater portion of ship hulls are now hosting smuggled goods. Port and harbor infrastructure can also be targeted by improvised explosive devices. The BioSwimmer works with the field officer to recognize these threats in time to take remediation measures.

Funded through the DHS S&T Small Business Innovation Research (SBIR) program, the BioSwimmer and its onboard sensors work to inspect the outside of ships for drugs and other contraband trying to make it across the border underwater. This inspection is enabled through the BioSwimmer’s ability to maneuver within the confines of ships’ propulsion, steering, and recesses, all while twisting and turning within the water just like an actual fish.

“This next generation unmanned underwater vehicle could be leveraged widely by the United States Coast Guard and Customs and Border Protection to inspect ships and piers for contraband and other material,” said S&T Program Manager David Taylor.

The BioSwimmer is a biomimetic system modeled after the Bluefin Tuna known for its extraordinary swimming athleticism. Similar to the Bluefin, the BioSwimmer has the ability to twist and turn in limited space within the water. It is this ability that sets BioSwimmer apart from most other remotely operated vehicles. The BioSwimmer provides faster hull scanning, increased maneuverability, and more robust coverage. Although BioSwimmer is expected to cost slightly more than conventional remotely operated vehicles, the cost benefit will be substantial in terms of port and harbor security, reduction in volume of smuggled contraband entering the country, and apprehension of smugglers.

Demonstrations of the developmental BioSwimmer have been ongoing since late 2013 – most recently July 16-27, 2016 at the Port of Charleston for CBP’s Atlanta area Port Directors Conference. At that demonstration, it conducted a search of six ships, one barge, and one bridge abutment, and performed a search for a lost shipping container in the harbor channel. Given its capability to inspect hard to reach areas of vessels and infrastructure, Taylor is optimistic about the potential for BioSwimmer to achieve commercialization and become a valued partner in strengthening the security of our ports.