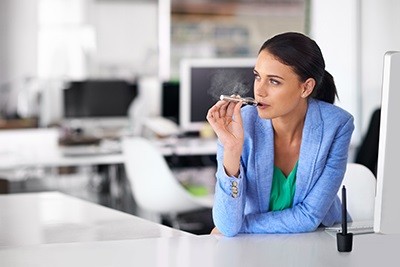 E-cigarettes not a safe alternative to traditional cigarettes.

Newswise — Oct. 18, 2017─E-cigarettes appear to trigger unique immune responses as well as the same ones that cigarettes trigger that can lead to lung disease, according to new research published online in the American Thoracic Society’s American Journal of Respiratory and Critical Care Medicine.

In “E-Cigarette Use Causes a Unique Innate Immune Response in the Lung, Involving Increased Neutrophilic Activation and Altered Mucin Secretion,” Mehmet Kesimer, PhD, senior study author and associate professor of pathology at the University of North Carolina Chapel Hill, and coauthors report findings from what they believe is the first study to use human airway samples to explore the harmful effects of e-cigarettes.

“There is confusion about whether e-cigarettes are ‘safer’ than cigarettes because the potential adverse effects of e-cigarettes are only beginning to be studied,” Dr. Kesimer said, noting that this study looked at possible biomarkers of harm in the lungs. “Our results suggest that e-cigarettes might be just as bad as cigarettes.”

A 2016 Surgeon General’s report found that e-cigarette use increased by 900 percent among high school students from 2011 to 2015. Also in 2016, the Food and Drug Administration extended its regulatory oversight of tobacco products to include e-cigarettes.

The study also found that e-cigarettes produced some of the same negative consequences as cigarettes. Both e-cigarette and cigarette users exhibited significant increases in:

“Comparing the harm of e-cigarettes with cigarettes is a little like comparing apples to oranges,” Dr. Kesimer said. “Our data shows that e-cigarettes have a signature of harm in the lung that is both similar and unique, which challenges the concept that switching from cigarettes to e-cigarettes is a healthier alternative.”

This study was supported by the National Institutes of Health and the Food and Drug Administration Center for Tobacco Products. The content is solely the responsibility of the authors and does not necessarily represent the official views of the NIH or the FDA.

Share via Twitter
“Study finds #e-cigarettes may pose unique hazards to lung health, as well as same ones caused by cigarettes.”