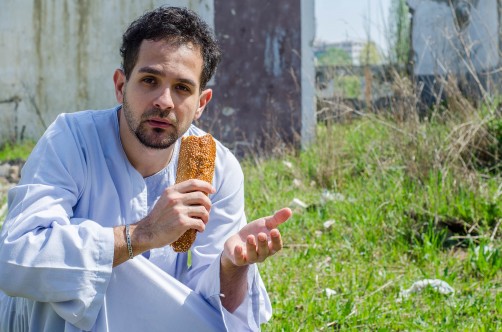 Egypt imports half its wheat, a concern to economists and scientists worldwide. UF/IFAS researchers say insufficient food production can lead to civil unrest.

Newswise — GAINESVILLE, Fla. --- Scientists, including many at the University of Florida, are trying to figure out how to feed 10 billion people worldwide by 2050. As they do, some UF Institute of Food and Agricultural Sciences researchers are studying how arid nations can produce enough crops to feed themselves and to avoid civil protests or even war.

Egypt, for instance, lacks sufficient water to grow enough wheat, forcing the country to import half of that type of grain, UF/IFAS researchers say. A new UF/IFAS-led study shows Egypt’s wheat production will likely be insufficient in 20 to 25 years.

“Breakdowns in the global food system are not only a root cause of hunger, under-achievement and obesity, but also have been identified as a key cause of social unrest and, in some cases, civil war,” said Anderson, a UF/IFAS professor of food and resource economics.

As an example, increased bread prices were one reason people protested during the Arab Spring of 2010-2011, said Senthold Asseng, a UF/IFAS professor of agricultural and biological engineering.

Asseng led a recent study on Egypt’s long-term ability to produce its own wheat.

Egypt faces critical agricultural concerns. At 13.2 million tons per year, the country ranks as the world’s leading wheat importer, taking half its grain from other nations, Asseng said.

In the new study, researchers from UF/IFAS and Egypt found the middle-Eastern nation can grow enough wheat to feed itself through 2040, but after that, production looks uncertain.

“To feed its population and become independent from wheat imports, the Egyptian government tries to expand wheat production by doubling the irrigation area through a new national initiative,” Asseng said.

“This initiative will make Egypt self-sufficient in the near future, but will be insufficient after (the decade of the) 2040s,” he said. “By then, Egypt will have to start importing wheat, again, due to declining yields from climate change and increasing demand with population growth.”

He and other scientists work on the Agricultural Model Intercomparison and Improvement Project, also known as AgMIP -- a global research network.

Scientific knowledge through AgMIP is key to understanding the impact and consequences of climate change on agriculture and food systems, Asseng said. The group enabled this multi-institutional and bi-national research, he said.

Egypt’s wheat production gains global importance because many countries export wheat there. Most comes from Russia, the Ukraine and Romania, Asseng said. The U.S. exports relatively little wheat to Egypt -- about 100,000 tons in 2017-2018, he said. But the U.S. and Egypt are linked through wheat prices.

“On an economic level, as the largest wheat importer, the role of Egypt in the global grain market is critical to any grain- or food-producing country or region,” Asseng said. “The U.S. is the fourth-largest wheat producer and number one wheat exporter in the world.”

Almost every state in the U.S. produces wheat. The leading states are Kansas, North Dakota, Montana and Washington.

Florida produces very little wheat, but through a new breeding program, Md Ali Babar, a UF/IFAS agronomy professor, is developing wheat varieties for the Sunshine State and other parts of the world. Babar is working to breed wheat cultivars that are more tolerant to heat and dry weather for a future predicted to be warmer.

The Egypt wheat study is published in the journal Environmental Research Letters.