Sequence of images showing electric eel attacking a fake alligators head outfitted with LED lights to show the strength and extent of the electric pulses that the eel is generating. Sequence runs from upper left to lower right.

Illustration of how the electrical circuit formed between an electric eel and its target change during a leaping attack. 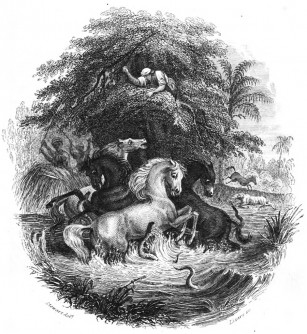 Historic illustration of Alexander von Humboldt's story of the battle between the horses and electric eels.

Newswise — In a legendary account the famous 19th century explorer and naturalist Alexander von Humboldt recounted a dramatic battle between horses and electric eels that he witnessed on a field trip to the Amazon. In the following 200 years, however, there have been no scientific reports of similar behavior on the part of the eels, suggesting that perhaps von Humboldt exaggerated.

Last year, Vanderbilt University biologist Kenneth Catania accidentally discovered that, under certain conditions, the electric eels that he has been studying will react even more dramatically than von Humboldt described: When cornered by a threatening object that is partially submerged, they will often attack by raising up out of the water, pressing their chin against the object’s side and administering a series of powerful electrical shocks.

Catania, who is the Stevenson Professor of Biological Sciences, has included a description of this behavior, an assessment of its effectiveness and an explanation of the evolutionary advantages it provides the eels in the paper “Leaping eels electrify threats supporting von Humboldt’s account of a battle with horses,” published online this week in the Proceedings of the National Academy of Sciences early edition.

“The first time I read von Humboldt’s tale, I thought it was completely bizarre,” said Catania. “Why would the eels attack the horses instead of swimming away?”

The biologist keeps the eels he studies in large tanks. Initially, he used a net with metal rim and handle to transfer the eels from one place to another. “In hindsight, it probably wasn’t the best design to use with electric eels,” he acknowledged. However, it was a serendipitous choice. As he scooped up the larger eels he found that every so often, an eel would stop trying to evade the net and attack it by leaping out of the water while pressing its chin to the handle, all the while generating a series of high-voltage pulses. (He was wearing rubber gloves so he didn’t get shocked.)

In a previous study, Catania found that eels interpret small conductors as prey. In the case of the metal-rimmed net, the eels seem to interpret the large conductor emerging from the water as a potential predator. Catania described the eel’s defensive behavior as “both literally and figuratively shocking.”

Catania’s previous research has also shown that that when eels attack a free-swimming fish, they hit it with a high-frequency volley of millisecond pulses that don’t fry the fish, but instead stimulate the nerves that control its muscles and cause them to contract – freezing up the prey with the same mechanism of a TASER. Of course, like a TASER, the eel’s pulses inevitably activate sensory nerves that cause pain. Causing pain is not so useful for catching prey, but like an electric fence, it is just the ticket for deterring a predator.Catania designed a series of experiments specifically to determine what is happening with this newly described “shocking leap” behavior.

By hooking a voltmeter and then an ammeter to an aluminum plate, Catania was able to measure the nature and strength of the electric impulses the eels were producing as they leap up the conductor. He found that both the voltage and the amperage produced by the eels increased dramatically as the eel leaped higher on the target.

“This allow the eels to deliver shocks with a maximum amount of power to partially submerged land animals that invade their territory,” Catania said. “It also allows them to electrify a much larger portion of the invader’s body.”

To visually illustrate this effect, the researcher painstakingly covered a plastic arm and a plastic alligator head with a conductive metal strip and a network of LEDs. When an eel attacks these targets, the electrical pulses it generates cause the LEDs to light up brightly.

“When you see the LEDs light up, think of them as the endings of pain nerves being stimulated. That will give you an idea of how effective these attacks can be,” Catania said.(In the von Humboldt story, two horses where stunned and drowned in the first five minutes of the skirmish with the eels.)

Catania found that his eels most often attacked when the water in the aquarium was lowered, probably because they felt cornered. Much of the Amazon basin, where the electric eels live, is under water during the rainy season but, during the dry season, the water recedes leaving many ponds and oxbows which could restrict the eels' freedom of movement and make them vulnerable to attacks by land predators.

Despite their power, the pulses that the eels produce while fully submerged might not be sufficient to discourage a hungry terrestrial predator if the predator can keep most of its body out of the water. “If you put your fingers in the water when the eel generates a pulse, you can barely feel it. If you put your whole hand in the water, you feel it a bit more strongly,” Catania said.

In addition, in some locales electric eels are known to breed during the dry season and might benefit from having an effective way to protect their young.The eels' leaping behavior likely evolved in steps, Catania suggested. Simply getting close to the target would increase the effectiveness of its electroshocks. Making direct contact with the intruder would further increase the power of the impulses, as would making contact above the water. Once its head is above the water, then the further up the eel goes, the more power is directed to the threat.

“Each stage provides a successive advantage, suggesting how it may have evolved,” he has concluded.

As far as von Humboldt goes, “it seems reasonable to suggest that [he] observed a similar eel behavior on March 19th of 1800,” Catania said.

The project was supported by National Science Foundation grant 1456472.

Caption: Sequence of images showing electric eel attacking a fake alligators head outfitted with LED lights to show the strength and extent of the electric pulses that the eel is generating. Sequence runs from upper left to lower right.

Caption: Illustration of how the electrical circuit formed between an electric eel and its target change during a leaping attack. 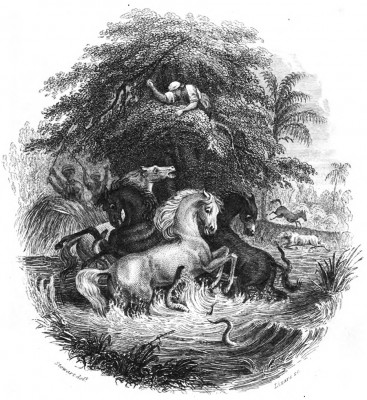 Caption: Historic illustration of Alexander von Humboldt's story of the battle between the horses and electric eels.