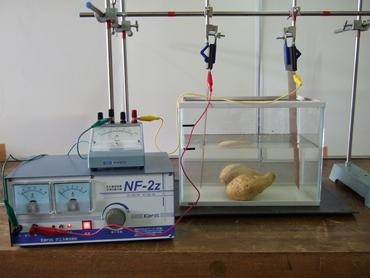 EMBARGOED FOR RELEASE: Monday, Aug. 20, 2012, 2:45 p.m., Eastern TimeNote to journalists: Please report that this research was presented at a meeting of the American Chemical Society.

Newswise — PHILADELPHIA, Aug. 20, 2012 — Already ranked by some as number one in nutrition among all vegetables, the traditional sweet potato can be nutritionally supercharged ― literally ― with a simple, inexpensive electric current treatment that increases its content of healthful polyphenols or antioxidants by 60 percent, scientists said here today.

Their report on the first electrical enhancement of sweet potatoes, a dietary staple since prehistoric times, was part of the 244th National Meeting & Exposition of the American Chemical Society, the world’s largest scientific society. The meeting, with 8,600 reports on new advances in science and a projected attendance of 14,000, continues through Thursday. “Many people don’t realize it, but sweet potatoes are one of the world’s most important food crops,” said Kazunori Hironaka, Ph.D., who led the research team.

More than 95 percent of the global sweet potato crop grows in developing countries, where it is the fifth-most important food, and malnutrition is a serious problem,” he said. “Our discovery offers a way to further increase the sweet potato role in relieving hunger and improving nutrition and health.”

Hironaka and colleagues at the University of the Ryukyus, Nishihara, Okinawa, Japan, previously discovered that passing an electric current through white potatoes increased the polyphenol levels by 60 percent. Polyphenols are a family of chemical compounds found naturally in fruits and vegetables that may help protect people from diseases and the effects of aging.

The electric current apparently stresses the potatoes, and they produce more polyphenols as a protective measure. The team suspected that the same effect would occur with sweet potatoes, but until now, nobody had tried.

In the new study, Hironaka and colleagues used the same approach, putting sweet potatoes into a salt solution that conducts electricity, and then passing various amounts of electric current through the water and the potatoes for 5 minutes. The best results came with 0.2 amps of current, which increased antioxidant activity in the potatoes by 1.4 times and total polyphenol content by 1.6 times compared to untreated potatoes. He noted that untreated sweet potatoes already are high in antioxidants, with 7 times more polyphenols than other potatoes.

The Center for Science in the Public Interest once ranked the baked sweet potato number one in nutrition of all vegetables. With a score of 184, the sweet potato outscored the next-highest vegetable (a baked white potato) by more than 100 points. Points were given for content of dietary fiber, naturally occurring sugars and complex carbohydrates, protein, vitamins A and C, iron and calcium. Points were deducted for fat content (especially saturated fat), sodium, cholesterol, added refined sugars and caffeine. Hironaka also noted that the electrical zapping seems to have no effect on the flavor, and that steaming is the best method of cooking to retain the most antioxidants. The electrical treatment method is inexpensive and simple enough to be used on small farms or in food distribution centers, he noted.