'Substantial Gaps' in Knowledge of Potential Risks and Benefits, Says Review in Journal of Addiction Medicine 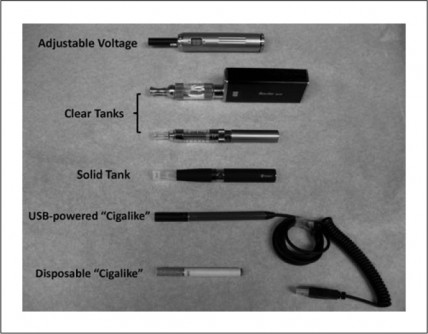 Some types of electronic cigarettes.

Newswise — August 5, 2014 – Electronic cigarettes (ECIGs) are booming in popularity—but there's still only limited evidence on their potential health risks, or their advertised benefits in helping people to quit smoking, according to a research review in the July/August Journal of Addiction Medicine, the official journal of the American Society of Addiction Medicine. The journal is published by Lippincott Williams & Wilkins, a part of Wolters Kluwer Health.

Based on their review, Alison B. Breland, PhD, of Virginia Commonwealth University, Richmond, and colleagues, write, "[V]ery little is known about the acute and longer-term effects of ECIG use for individuals and the public health, especially given the dramatic variability in ECIG devices, liquids, and user behavior." The work was funded by the National Institute on Drug Abuse of the National Institutes of Health and the Center for Tobacco Products of the U.S. Food and Drug Administration.

Potential Health Concerns, But Limited Data on ECIG SafetyAlso known as "electronic nicotine delivery systems," ECIGs consist of a heating element that turns an "e-liquid" solution into vapor, which the user inhales. The ECIG solutions typically contain nicotine, but not always. E-cigarette models vary widely in design and appearance—some resemble cigarettes, but a wide range of other designs and configurations are available.

Some laboratory studies suggest ECIG use has short-term effects on lung function similar to those produced by cigarette smoking, while other studies report no acute impairment The effects of inhaled nicotine in ECIG vapor can be similar to that of nicotine in tobacco smoke.

There is little or no evidence on the long-term effects of ECIG use. The authors write, "No existing studies address the extent to which the inhalation of ECIG vapor hundreds of times every day over a period of multiple years influences human health, particularly pulmonary function."

Are E-Cigarettes a Useful Quit-Smoking Aid?Surveys suggest rising awareness and use of ECIGs, with most users being cigarette smokers. In a 2013 study, 13 percent of college students said they had tried ECIGs.

There is some evidence that ECIGs can reduce tobacco abstinence symptoms in cigarette smokers, but it's unclear how much this is related to nicotine delivery or to psychological effects. So far, the best available studies—two randomized clinical trials—have shown no significant difference in quit rates among in ECIG users.

In the absence of high-quality research evidence, there's currently no way to analyze the ongoing arguments for and against ECIGs. However, research however shows that the societal price of addiction to nicotine is high—tobacco use in the US is implicated in more deaths each year than alcohol and illicit drugs combined.

Given the "substantial knowledge gaps," the authors highlight the need for further research on the health effects of ECIGs. They note: "Given today’s inability to generalize across ECIGs, individuals, and populations, all stakeholders in the ECIG debate, regardless of their opinions concerning the public health effects of ECIGs, must acknowledge that there is much to be learned about this rapidly evolving product category…generalization in the absence of data is speculation, not science."

Click here to read "Electronic Cigarettes: A Review of Safety and Clinical Issues."

About The American Society of Addiction Medicine The American Society of Addiction Medicine is a national medical specialty society of over 3,200 physicians and associated health professionals. Its mission is to increase access to and improve the quality of addiction treatment, to educate physicians, and other health care providers and the public, to support research and prevention, to promote the appropriate role of the physician in the care of patients with addictive disorders, and to establish Addiction Medicine as a specialty recognized by professional organizations, governments, physicians, purchasers and consumers of health care services and the general public. ASAM was founded in 1954, and has had a seat in the American Medical Association House of Delegates since 1988.