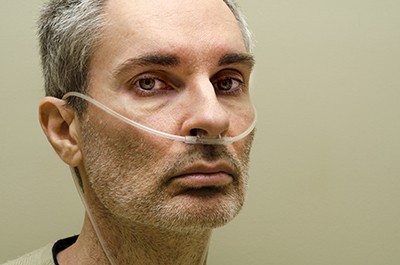 Newswise — Sept. 8, 2017─People with severe emphysema may breathe better after a minimally invasive procedure that places valves in the airways leading to diseased portions of their lungs, according to a randomized, controlled trial published online in the American Thoracic Society’s American Journal of Respiratory and Critical Care Medicine.

The authors note that previous studies of the valves, which are placed using a bronchoscope, found that for patients with severe emphysema, this minimally invasive therapy represents an alternative to lung volume reduction surgery. Patients undergoing endobronchial valve (EBV) therapy appear to experience similar improvements in lung function, shortness of breath, exercise intolerance and quality of life--without the morbidity and mortality previously associated with surgery.

“EBVs have been shown to work in single center trials, but these studies tend to be performed at centers, and by physicians, with considerable experience, so the results may not be generalizable to other centers,” said lead study author Samuel V. Kemp, MD,  a respiratory physician and expert in interventional bronchoscopy at Royal Brompton Hospital, in the U.K. “What is interesting about this multicenter trial is that the results are at least as good as the single center studies, even though some of the investigators were new to the technique.”

Zephyr® valves have been certified for human use in Europe, but are not widely available to patients in all health care systems. The valves have not been approved in the U.S., though a clinical trial of the technology is underway to support an application to the Food and Drug Administration for approval.

The European study enrolled 97 patients from 17 medical centers. The patients were all ex-smokers over the age of 40 who had severe heterogeneous emphysema (emphysema isolated to certain parts of the lung).  Sixty-five were randomly assigned to the EBV arm. On average, they received four valves to cut off diseased portions of their lungs that did not receive collateral ventilation (ventilation of alveoli through passages that bypass the normal airways). The other patients received standard of care based on each medical center’s protocols for caring for patients following bronchoscopy.

After six months, 30 of the 32 participants in the control arm left the study and received EBV therapy. The authors will continue to follow those who received EBVs for up to two years.

“There has been a lot of skepticism about valves, largely owing to poorly designed early trials,” Dr. Kemp said. “TRANSFORM proves that EBVs are a safe and effective treatment for appropriately selected patients with severe emphysema.

“For these patients, the benefits of EBVs are far greater than standard medical therapy, so it is important that patients be assessed by a multidisciplinary team to determine if this treatment will help them breathe better.”

Dr. Kemp added that for those patients with collateral ventilation, valves are not suitable and patients should be considered for lung volume reduction surgery.

The study was sponsored and funded by Pulmonx Corporation, Redwood City, California, U.S.A.