2-Aug-2017 9:00 AM EDT, by University of California San Diego
favorite_border 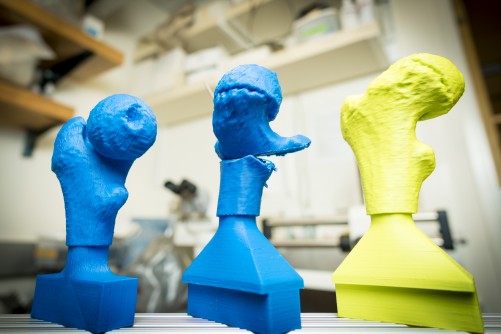 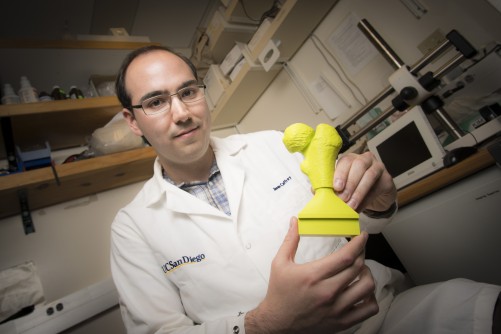 Jason Caffrey, an MD student with a PhD in bioengineering, led the 3D printing efforts.

Newswise — A team of engineers and pediatric orthopedic surgeons are using 3D printing to help train surgeons and shorten surgeries for the most common hip disorder found in children ages 9 to 16. In a recent study, researchers showed that allowing surgeons to prep on a 3D-printed model of the patient’s hip joint cut by about  25 percent the amount of time needed for surgery when compared to a control group.

The team, which includes bioengineers from the University of California San Diego and physicians from Rady Children’s Hospital, detailed their findings in a recent issue of the Journal of Children’s Orthopaedics.

“Being able to practice on these 3D-models is crucial,” said Dr. Vidyadhar Upasani, pediatric orthopedic surgeon at Rady Children’s and UC San Diego and the paper’s senior author.

In this study, Upasani operated on a total of 10 patients. For five of the patients, he planned the surgeries using 3D-printed models. He didn’t use models to plan the other five. In addition, two other surgeons operated on a different group of five patients without using models. In the group where Upasani used 3D-printed models, surgeries were 38-45 minutes shorter compared with the two control groups. These time savings would translate into at least $2700 in savings per surgery, researchers said. By contrast, after the one-time cost of buying a 3D printer for about $2200, physicians can make a model for each surgery for about $10.

The results of the study were so positive that Rady Children’s orthopedics department has acquired its own 3D printer, Upasani said. “I’ve seen how beneficial 3D models are,” he said. “It’s now hard to plan surgeries without them.”

Slipped capital femoral epiphysis is a condition that affects about 11 in 100,000 children in the United States every year.

In this condition, the head of the patient’s femur slips along the bone’s growth plate, deforming it. The main goal of the surgery is to sculpt the femur back into its normal shape and restore hip function. This is difficult because during the surgery, the bone and its growth plate are not directly visible. So the surgeons can’t visualize in 3D how the growth plate is deformed. The condition is associated with obesity and hormonal dysfunction and has become more common as obesity increases among young people.

Traditionally, before the surgery, physicians study X-rays of the surgery site taken from different angles, which they use to plan the bone cuts. During surgery, an X-ray fluoroscopy beam also shines periodically on the surgery site to help guide the physician. These methods are time consuming and expose the child to radiation. In addition, physicians don’t have a physical model to educate patients or practice the surgery beforehand.

How the 3D-printed models were made

In this study, two UC San Diego students, Jason Caffrey, pursuing a Ph.D. in bioengineering, and Lillia Cherkasskiy, pursuing an M.D. and conducting her Independent Studies Project, teamed up with Upasani, bioengineering professor Robert Sah, and their colleagues. They used commercially available software to process CT scans of the patients’ pelvis and create a computerized model of bone and growth plate for 3D printing.  The models allowed surgeons to practice and visualize the surgery before they operated in the real world.

One of the biggest obstacles was getting the right texture for the 3D prints, so that they mimic bone. If the texture was too thick, the model would melt under the surgeon’s tools; if too thin, it would break. The engineers finally settled on a honeycomb-like structure to mimic bones for their models. The printing process itself took four to 10 hours for each print.

Caffrey is now working on his medical degree at the UC San Diego School of Medicine. He is still collaborating with Upasani at Rady Children’s to use 3D printed models to evaluate the best way to surgically correct hip dysplasia, a developmental deformation or misalignment of the hip joint found in infants. 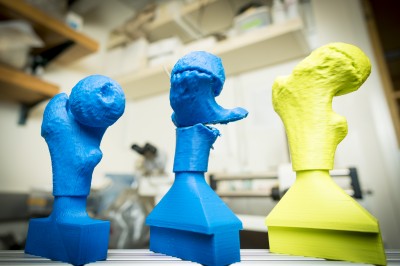 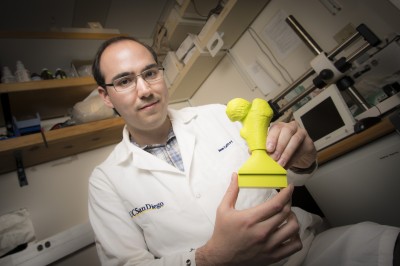 Caption: Jason Caffrey, an MD student with a PhD in bioengineering, led the 3D printing efforts.