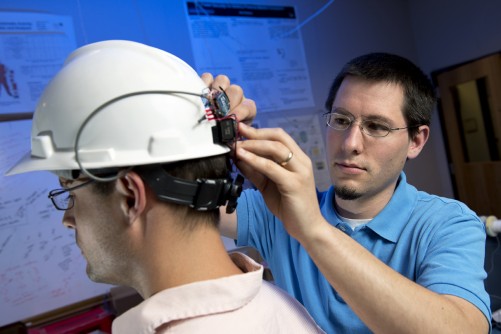 Jason B. Forsyth, right, of Durham, N.C., and a Ph.D. candidate in computer engineering, http://vt.academia.edu/JasonForsyth, places a wearable computing system on a helmet to protect construction workers from carbon monoxide poisoning. The work garnered the Virginia Tech researchers a Best Paper award.

Newswise — Research calling for the use of a wearable computing system installed in a helmet to protect construction workers from carbon monoxide poisoning, a serious lethal threat in this industry, has garnered the Virginia Tech investigators a Best Paper Award from a prestigious scientific and engineering community.

This award will be presented at the August 17-21, 2013 Institute of Electrical and Electronic Engineers (IEEE) Conference on Automation Science and Engineering .

Carbon monoxide poisoning is a significant problem for construction workers in both residential and industrial settings. The danger exists because the exhaust from gasoline-powered hand tools can quickly build up in enclosed spaces and easily overcome the tool’s users and nearby co-workers.

In the paper, the researchers explained how they integrated a pulse oximetry sensor into a typical construction helmet to allow continuous and noninvasive monitoring of workers’ blood gas saturation levels. The results of their study showed that a user of this helmet would be warned of impending carbon monoxide poisoning with a probability of greater than 99 percent.

The paper, Feasibility of Intelligent Monitoring of Construction Workers for Carbon Monoxide Poisoning,” can be found at: http://ieeexplore.ieee.org/xpl/articleDetails.jsp?arnumber=6200386. It was the focus of Forsyth’s master’s thesis, and Martin, Young-Corbett and Dorsa were all members of his graduate committee.

Ten Virginia Tech students participated in the study conducted on the university campus. They mimicked simple tasks of construction workers.

They selected a helmet for the installation of a wearable computer because they needed a design that could be worn year round which ruled out seasonal clothing such as overalls or coats. They also wanted a design that was socially acceptable, and one that struck a balance between comfort, usability, and feasibility.

“This helmet is only a first step toward our long-term vision of having a network of wearable and environmental sensors and intelligent personal protective gear on construction sites that will improve safety for workers,” according to their report. “While this helmet targets carbon monoxide poisoning, we believe there are compelling opportunities for wearable computing in reducing injuries due to falls, electrocution, and particulate inhalation, as well as workers on foot being struck by vehicles.”

Martin is a past recipient of both the Presidential Early Career Award for Scientists and Engineers and the National Science Foundation CAREER Award, both furthering his research in the design of electronic textiles and “smart” clothes.

Young-Corbett is working in a new field of engineering known as Prevention through Design or PtD. This optimal method of preventing occupational illnesses, injuries, and fatalities is to “design out” the hazards and risks; thereby, eliminating the need to control them during work operations. She is also the associate director of the Center for Innovation in Construction Safety and Health Research of the Institute of Critical Technology and Applied Science at Virginia Tech.

Dorsa has a National Science Foundation funded studio in interdisciplinary product development, working with faculty from the College of Engineering and the College of Business’ Department of Marketing. In 2005, Design Intelligence chose him as one of the 40 most admired industrial design faculty in the U.S.