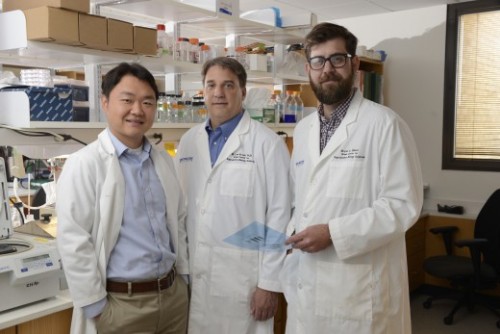 In recent years, PARP-inhibiting drugs have received significant attention as potential cancer therapies. The first PARP inhibitor was approved by the FDA in 2014 for certain ovarian cancers, and about 140 clinical trials – including several at UT Southwestern – are currently examining the impact of these drugs on different types of cancer.

To date, most studies have looked at PARP inhibitors only in terms of their effects on DNA repair and the maintenance of genomic integrity, said Dr. Kraus, also Professor of Obstetrics and Gynecology, and Pharmacology, and holder of the Cecil H. and Ida Green Distinguished Chair in Reproductive Biology Sciences.

“People tend to think that PARP inhibitors work only by blocking DNA repair – an important cellular function that can promote the killing of cancer cells when inhibited,” he said. “However, our studies show that PARPs also play key roles in gene regulation and RNA synthesis, which are distinct from DNA repair but can also be lethal when inhibited or altered.”

The researchers initially developed an innovative chemical-genetic assay to monitor the enzymatic activity of three different PARP family members and to identify the proteins targeted and modified by the three proteins.

“After we developed the technology and realized how powerful it was for identifying PARP targets, we repurposed the method to examine ADP-ribosylation across the genome,” said Dr. Kraus, whose laboratory studies the basic mechanisms of signaling and gene regulation by small molecules and how these pathways relate to human physiology.

The researchers focused on a protein complex called negative elongation factor, or NELF, which is a target of PARP-1, one of the PARP protein family members. NELF is involved in transcriptional regulation, a major process by which cells control gene activity.

“We were able to show that modification of NELF by PARP-1 in breast cancer cells alters how genes are turned on and off, potentially changing the biology of the cells,” Dr. Kraus said. “This is a new connection.”

“PARPs also play a key role in inflammatory and cardiovascular diseases, and there is strong evidence from animal models that links PARP inhibitors to improved outcomes in both types of diseases,” he said. “By discovering a new aspect of the biology of PARPs, we have expanded our understanding of what these proteins do. Our results open new avenues that go beyond DNA repair for using PARP inhibitors to treat cancer and other diseases.”

Support for the work came from the National Institutes of Health, the American Heart Association, the Cancer Prevention and Research Institute of Texas, The Welch Foundation, the UT Southwestern Endowed Scholars Program, and Green Center for Reproductive Biology Sciences endowments.

To automatically receive news releases from UT Southwestern via email,
subscribe at www.utsouthwestern.edu/receivenews