The discovery further challenges the accepted scientific dogma that the lens is shut out from the immune protection. 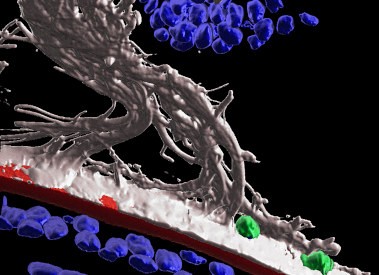 Surveillance of the lens by immune cells in response to wounding of the cornea. 3D surface structure imaging at one day post-corneal wounding shows immune cells (CD45+, green) migrating along within ciliary zonule fibrils (MAGP1+, white) that extend along the surface of the matrix capsule that surrounds the lens (perlecan+, red). Also seen are the ciliary zonules (white) that link the lens to the ciliary body. Nuclei in both these tissues of the eye are labeled blue.

Newswise — PHILADELPHIA – The lens of the eye is an unusual organ. Unlike most of the body’s organs, blood vessels don’t reach the lens. If they did, they’d obscure our vision and we wouldn’t be able to see. The lack of vasculature led scientists to believe immune cells, which travel via the bloodstream, couldn’t get to this part of the body either. But a few years ago, Jefferson researchers challenged this long held assumption by demonstrating that immune cells populate the lens in response to degeneration. Now the Jefferson team finds the eye also launches an immune response in the lens after injury. The discovery adds to a growing body of evidence that is working to overturn the accepted dogma of the field.

“Why would we evolve a tissue that is so central to our being able to see without ways to ensure its protection, its ability to repair itself?” says, Sue Menko, PhD, Professor in the Department of Pathology, Anatomy and Cell Biology at Thomas Jefferson University, who led the research. "Immune cells are central to that protection and repair.”

The lens of the eye works like a camera lens. Its main purpose is to focus images coming in through the cornea – the transparent front layer of the eye – onto the retina at the back of the eye. The images are detected by the retina and then translated in the brain as what we see. That lens must be crystal clear. As a result, scientists have always described the lens as a tissue without vasculature and therefore no source of immune cells either.

“At some point, you think about it and you wonder how that’s possible,” Dr. Menko says. “It doesn’t really make a lot of sense.”

The puzzle led Dr. Menko and her team to investigate whether immune cells are present in the eye. In a previous study, they discovered that when the lens is in a diseased state, immune cells are not only recruited there, but they also show up in the cornea, retina, and vitreous body – all parts of the eye that don’t normally have immune cells. Dr. Menko’s work suggested that the immune cells come from the ciliary body, a sort of muscle that helps squeeze and pull the lens, changing its shape, and helping it focus.

“The ciliary body is also a place that is vascular rich so it seemed like the most obvious place to look,” Dr. Menko says.

Now, in the latest work, Dr. Menko and colleagues show that after injury to the cornea, immune cells travel from the ciliary body to the lens along fibers known as ciliary zonules. The researchers used fluorescent markers and high-powered microscopes to observe structures of mouse eyes one day after receiving a scratch on the cornea. The high-tech imaging analysis Dr. Menko’s team used revealed that following injury to the cornea, the immune system launches a response to protect the lens. Immune cells are recruited to the lens via the ciliary zonules, and crawl along the surface of the lens to surveille and protect from adverse impacts of the corneal wound.

“This is really the first demonstration that surveillance by immune cells of the lens in response to injury somewhere else in the eye,” Dr. Menko says.

The researchers also found that some immune cells were able to cross the lens capsule, a membranous structure that helps to keep the lens under tension. The results could point to a role for immune cells in cataract formation.

Together, the findings indicate that in response to damage or disease, the eye utilizes alternative mechanisms – rather than direct contact with the bloodstream like non-transparent tissues do – to ensure that immune cells get to sites to provide healing and protection.

“We’re excited to go from thinking this doesn’t make sense to proving that the body is amazing and can adapt to anything. You just have to go in and look for it,” Dr. Menko says.

“We should be willing to challenge dogma because that's where discovery is,” she adds. “It can enlighten what we know if we always keep our mind open to what doesn’t make sense and what maybe should be challenged to understand things better.”

Dr. Menko and colleagues published the results on May 25th in The FASEB Journal.