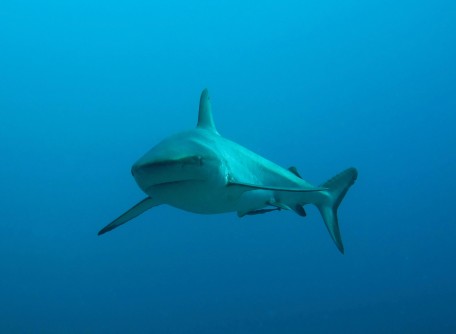 A grey reef shark, one of the species encountered in a recent study by WCS and the University of Western Australia. Marine researchers found that the number of sharks in Fiji’s largest marine reserve (where fishing is prohibited) is two to four times greater than in adjacent areas where fishing is permitted.

Newswise — Researchers from the Wildlife Conservation Society and the University of Western Australia have found that Fiji’s largest marine reserve contains more sharks than surrounding areas that allow fishing, evidence that marine protected areas can be good for sharks.

In a study of the no-take reserve’s shark populations, the researchers found that the number of sharks in Namena Reserve—located on the southern coast of Fiji’s Vanua Levu Island—is two to four times greater than in adjacent areas where fishing is permitted.

The researchers conducted their study during a three-week period (July 4-28) in 2009 in Namena, a 60-square-kilometer reserve established in 1997 and managed by local communities. In order to survey the sharks, Goetze and the WCS Fiji team used stereo baited remote underwater video systems to record data at eight sites within the reserve and eight outside the reserve at both shallow and deeper depths (between 5-8 meters, and 25-30 meters respectively).

“The study not only provides evidence that Fiji’s largest marine reserve benefits reef sharks, but achieves this in a non-destructive manner using novel stereo video technology,” said Goetze, the lead author of the paper.

The 60-minute video segments taken captured images of five different species of reef shark, providing the researchers with data on shark abundance. In addition, Goetze and the research team also were able to estimate the length and size of the sharks whenever the animals were within eight meters of the camera, enabling them to generate estimates on biomass for Namena Reserve.

Outside the reserve, in areas where fishing is permitted, the researchers found fewer sharks. The researchers note that, because local Fiji communities traditionally considered sharks to be sacred, eating them is typically taboo. The most likely driver of higher shark densities within the reserve, assert the authors, is the significantly higher availability of prey fish that WCS researchers have found within the reserve boundaries compared with adjacent areas.

As demand for shark products grows, higher prices are driving some locals to catch sharks, while Fiji shark populations are also vulnerable to foreign fishing fleets. Worldwide, increasing rates of harvesting are leading to the depletion of many of the world’s shark species.

“The news from Fiji gives us solid proof that marine reserves can have positive effects on reef shark populations,” said Dr. Caleb McClennen, Director of WCS’s Marine Program. “Shark populations are declining worldwide due to the demand for shark products, particularly fins for the Asian markets. We need to establish management strategies that will protect these ancient predators and the ecosystems they inhabit.”

The study was made possible by the generous support of the David and Lucile Packard Foundation, the Gordon and Betty Moore Foundation, the Stavros Niarchos Foundation, and the University of Western Australia (UWA) Marine Science Honours program.

The Wildlife Conservation Society saves wildlife and wild places worldwide. We do so through science, global conservation, education and the management of the world's largest system of urban wildlife parks, led by the flagship Bronx Zoo. Together these activities change attitudes towards nature and help people imagine wildlife and humans living in harmony. WCS is committed to this mission because it is essential to the integrity of life on Earth. Visit www.wcs.org.

The Gordon and Betty Moore Foundation believes in bold ideas that create enduring impact in the areas of science, environmental conservation and patient care. Intel co-founder Gordon and his wife Betty established the foundation to create positive change around the world and at home in the San Francisco Bay Area. Environmental conservation efforts promote sustainability, protect critical ecological systems and align conservation needs with human development. Patient care focuses on eliminating preventable harms and unnecessary healthcare costs through meaningful engagement of patients and their families in a supportive, redesigned healthcare system. Science looks for opportunities to transform–or even create–entire fields by investing in early-stage research, emerging fields and top research scientists. Visit Moore.org or follow @MooreEnviro.

The Stavros Niarchos Foundation (www.SNF.org) is one of the world’s leading international philanthropic organizations, making grants in the areas of arts and culture, education, health and medicine, and social welfare. The Foundation funds organizations and projects that exhibit strong leadership and sound management and are expected to achieve a broad, lasting and positive social impact. The Foundation also seeks actively to support projects that facilitate the formation of public-private partnerships as effective means for serving public welfare.