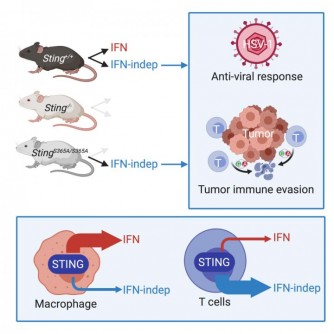 Researchers discovered that the protein STING has important functions besides activating the type 1 interferon (IFN) response in infection and cancer. 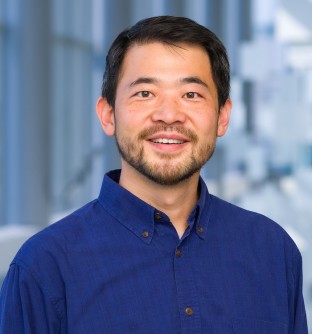 Newswise — DALLAS – Aug. 24, 2020 – The immune protein STING has long been noted for helping protect against viruses and tumors by signaling a well-known immune molecule. Now, UT Southwestern scientists have revealed that STING also activates a separate pathway, one that directly kills tumor-fighting immune cells. Among other implications, the finding could lead to development of longer-lasting immunotherapies to fight cancer.

“This is a major surprise for the field and really broadens what is known about STING,” says study leader Nan Yan, Ph.D., associate professor of immunology and microbiology at UTSW. “We’re already pursuing ways to harness this mechanism to treat tumors.”

STING was first identified about a decade ago as a protein that can activate the type I interferon (IFN) response in immune cells. The IFN response is a powerful and well-studied immune reaction that the body uses to fight everything from viruses and bacteria to rogue tumor cells. Since STING was found to have antiviral and antitumor properties, and to activate IFN, most researchers assumed the IFN pathway was the primary way STING carried out its immune activities. However, some have hypothesized that STING also has other functions; after all, it is found not only in humans and other mammals, but in ancient single-celled organisms that lived hundreds of million years ago, way before the emergence of IFN.

In this study published last month in the journal Immunity, Yan and his colleagues developed a version of STING that can’t turn on the IFN response but is otherwise functional. Then, they began testing what STING could do independent of its ability to activate IFN. The first surprise, says Yan, was that mice carrying this engineered version of STING could still protect against herpes simplex virus type 1 (HSV-1) infection. This finding reveals that STING can fight against infection without engaging the IFN response.

“It looks like it was this historical misunderstanding that since STING can activate interferon, that’s the only way it’s controlling viruses,” says Yan, a member of the Harold C. Simmons Comprehensive Cancer Center and a Rita C. and William P. Clements, Jr. Scholar in Medical Research. “We showed otherwise.”

STING likely does fight viruses, in part, through its interactions with the IFN pathway, Yan adds. But the important lesson learned here is that IFN is not the only weapon STING has to fight viruses.

When the research team analyzed the immune cells in which STING couldn’t signal the IFN pathway, they discovered something else – T cells quickly died when STING was activated. T cells, types of white blood cells, are main components of the adaptive immune system.

When they looked at T cells that were actively responding to a melanoma tumor in mice, Yan’s group found that the tumor was producing molecules that signaled STING and, in turn, caused the death of the T cells trying to fight the tumor.

“We know that tumors have a number of ways to fight back against the immune system,” says Yan. “The most well-known of these is that they turn off T cells, and that process is what many immunotherapies, such as checkpoint inhibitors, try to target. What we discovered is that tumors are also actively trying to kill T cells using the STING pathway. This reveals another opportunity for checkpoint inhibition immunotherapy.”

When the researchers deleted STING from the mice, the animals’ immune systems more effectively controlled melanoma tumors and fewer T cells died. Based on the results, Yan hypothesizes that drugs targeting STING could help T cells better fight tumors. In addition, methods of reducing levels of STING either through drugs or genetically engineered T cells could be combined with existing immunotherapies to make them more effective, by allowing T cells to survive for longer in the vicinity of a tumor.

Yan and his colleagues are already studying how drugs that target STING may work against cancer and are trying to better understand the molecules that link STING to T cell death.

Other UTSW researchers who contributed to this study were Jianjun Wu, Nicole Dobbs, and Kun Yang.