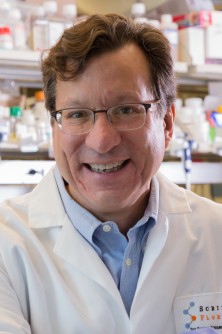 Newswise — JUPITER, FL – June 19, 2017 – Scientists on the Florida campus of The Scripps Research Institute (TSRI) have improved a state-of-the-art gene-editing technology to advance the system’s ability to target, cut and paste genes within human and animal cells—and broadening the ways the CRISPR-Cpf1 editing system may be used to study and fight human diseases.

Professor Michael Farzan, co-chair of TSRI's Department of Immunology and Microbiology, and TSRI Research Associate Guocai Zhong improved the efficiency of the CRISPR-Cpf1 gene editing system by incorporating guide RNAs with "multiplexing" capability. Guide RNAs are short nucleic acid strings that lead the CRISPR molecular scissors to their intended gene targets. The TSRI discovery means multiple genetic targets in a cell may be hit by each CRISPR-Cpf1 complex.

"This approach improves gene editing for a number of applications," Farzan added. "The system makes some applications more efficient and other applications possible."

This study was published as an advanced online paper in the journal Nature Chemical Biology on June 19, 2017.

Short for "Clustered Regularly Interspaced Short Palindromic Repeat," the CRISPR gene editing system exploits an ancient bacterial immune defense process. Some microbes thwart viral infection by sequestering a piece of a virus' foreign genetic material within its own DNA, to serve as a template. The next time the viral sequence is encountered by the microbe, it's recognized immediately and cut up for disposal with the help of two types of RNA. Molecules called guide RNAs provide the map to the invader, and CRISPR effector proteins act as the scissors that cut it apart.

Over the last five years, the CRISPR gene editing system has revolutionized microbiology and renewed hopes that genetic engineering might eventually become a useful treatment for disease. But time has revealed the technology's limitations. For one, gene therapy currently requires using a viral shell to serve as the delivery package for the therapeutic genetic material. The CRISPR molecule is simply too large to fit with multiple guide RNAs into the most popular and useful viral packaging system.

This advance could be important if gene therapy is to treat diseases such as hepatitis B, Farzan said. After infection, hepatitis B DNA sits in liver cells, slowly directing the production of new viruses, ultimately leading to liver damage, cirrhosis and even cancer. The improved CRISPR-Cpf1 system, with its ability to ‘multiplex,’ could more efficiently digest the viral DNA, before the liver is irrevocably damaged, he said.

Two types of these molecular scissors are now being widely used for gene editing purposes: Cas9 and Cpf1. Farzan said he focused on Cpf1 because it is more precise in mammalian cells. The Cpf1 molecule they studied was sourced from two types of bacteria, Lachnospiraceae bacterium and Acidaminococus sp., whose activity has been previously studied in E. coli. A key property of these molecules is they are able to grab their guide RNAs out of a long string of such RNA; but it was not clear that it would work with RNA produced from mammalian cells. Guocai tested this idea by editing a firefly bioluminescence gene into the cell’s chromosome. The modified CRISPR-Cpf1 system worked as anticipated.

"This means we can use simpler delivery systems for directing the CRISPR effector protein plus guide RNAs," Farzan said. "It's going to make the CRISPR process more efficient for a variety of applications."

Looking forward, Farzan said the Cpf1 protein needs to be more broadly understood so that its utility in delivering gene therapy vectors can be further expanded.