Promises to expand use of polarized light for drug screening, surveillance, optical communications 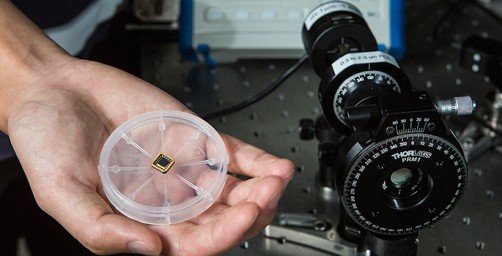 Chip in the hand performs the same function as the conventional, optics-based circularly polarized light detector on the right.

Newswise — Invention of the first integrated circularly polarized light detector on a silicon chip opens the door for development of small, portable sensors that could expand the use of polarized light for drug screening, surveillance, optical communications and quantum computing, among other potential applications.

The new detector was developed by a team of Vanderbilt University engineers directed by Assistant Professor of Mechanical Engineering Jason Valentine working with researchers at Ohio University. The work is described in an article published on Sept. 22 in the online journal Nature Communications.

“Although it is largely invisible to human vision, the polarization state of light can provide a lot of valuable information,” said Valentine. “However, the traditional way of detecting it requires several optical elements that are quite bulky and difficult to miniaturize. We have managed to get around this limitation by the use of ‘metamaterials’ – materials engineered to have properties that are not found in nature.”

Humans cannot readily distinguish the polarization state of light, but there are a number of other species that possess “p-vision.” These include cuttlefish, mantis shrimp, bees, ants and crickets.

Cuttlefish also produce varying patterns of polarized light on their skin, which has led scientists to hypothesize that they use this as a secret communication channel that neither their predators or prey can detect. This has led to the suggestion that CPL could be used to increase the security of optical communications by including polarized channels that would be invisible to those who don’t have the proper detectors.

Unlike unpolarized light, CPL can detect the difference between right-handed and left-handed versions of molecules. Just like hands and gloves, most biological molecules come in mirror-image pairs. This property is called chirality. For example, cells contain only left-handed amino acids but they metabolize only right-handed sugars (a fact utilized by some artificial sweeteners which use left-hand forms of sugar which taste just as sweet as the right-hand version but which the body cannot convert into fat).

Chirality can be dramatically important in drugs because their biological activity is often related to their handedness. For example, one form of dopamine is effective in the management of Parkinson’s disease while the other form reduces the number of white blood cells. One form of thalidomide alleviates morning sickness while the other causes birth defects. The number of chiral drugs in use today is estimated to be 2,500 and most new drugs under development are chiral.

“Inexpensive CPL detectors could be integrated into the drug production process to provide real time sensing of drugs,” said Vanderbilt University doctoral student Wei Li, who played a key role in designing and testing the device. “Portable detectors could be used to determine drug chirality in hospitals and in the field.”

The metamaterial that the researchers developed to detect polarized light consists of silver nanowires laid down in a sub-microscopic zigzag pattern on an extremely thin sheet of acrylic fixed to an optically thick silver plate. This metamaterial is attached to the bottom of a silicon wafer with the nanowire side up.

The nanowires generate a cloud of free-flowing electrons that produce “plasmon” density waves that efficiently absorb energy from photons that pass through the silicon wafer. The absorption process creates “hot” or energetic electrons that shoot up into the wafer where they generate a detectable electrical current.

There have been two previous efforts to make solid-state polarized light detectors. According to Li, one used chiral organic materials that are unstable in air, worked only in a narrow range of wavelengths and had a limited power range. Another was based on a more complicated multilayer design that only worked at low temperatures.

“That is the beauty of metamaterials: You can design them to work in the fashion you desire,” said Li.The efficiency of their prototype is 0.2 percent – too low to be commercially viable. Now that they have proven the viability of their approach, however, they have a number of ideas for how they can boost the efficiency to a level comparable to conventional photodetectors.