30-Jan-2018 10:05 AM EST, by National Institute of Biomedical Imaging and Bioengineering
favorite_border 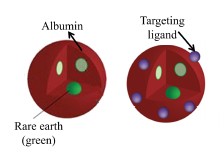 The rare Earth metal (the green sphere) is encased in the protein Albumin to create the Rare-Earth Albumin Nanocomposites (ReANCs). Ligands (molecules) can be attached to target specific organs. 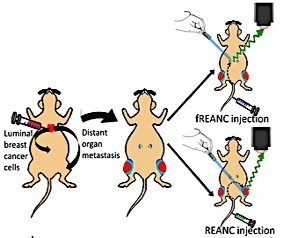 The ReANCs allow cancer to be illuminated in the leg bone and liver (images a and c), and lungs (images b and d) of this mouse. The bone lesions were able to be seen when the animal was on its stomach and the lung lesions were seen when animals was imaged while on its back.

Previous Next
Newswise — Researchers funded by the National Institute Biomedical Imaging and Bioengineering (NIBIB), a part of the National Institutes of Health (NIH), have developed florescent nanoparticles that light up to track the progress of breast cancer metastasis. They are currently testing the particles in mice with the hope of someday being able to use them in humans.

The rare Earth metal (the green sphere) is encased in the protein Albumin to create the Rare-Earth Albumin Nanocomposites (ReANCs). Ligands (molecules) can be attached to target specific organs. Credit: Prabhas Moghe, Rutgers University
Cancer metastasis, when  cancer cells migrate from their original site  and take up residence elsewhere in the body, is estimated to cause 90 percent of cancer deaths. Ten percent of first-time cancer diagnoses involve cancer that has already metastasized, and between 20 to 40 percent of first-time cases will develop metastasis within five years of the original cancer diagnosis. One of the major challenges in developing precision-therapeutics for metastases is a lack of diagnostic tools that can track the small tumors that develop when cancer spreads.

Prabhas Moghe, Ph.D., professor of Biomedical Engineering, and Chemical and Biochemical Engineering at Rutgers University, and his team are developing nanoparticles that can help  identify and track cancer metastasis early on, even when the tumor is incredibly small. They have started with targeting the most common places to which  breast cancer spreads, the lungs, adrenal glands, and bones. By changing the molecule that the nanoparticles are attached to, the researchers are able to create specialized “targeted” nanoparticles that seek out different organs. The fluorescent nanoparticles, made of rare earth metals, are encapsulated by albumin, forming Rare-Earth Albumin Nanocomposites (ReANCs). The albumin, a protein commonly found in blood, makes the engineered nanoparticles safe in animals. These ReANCs are engineered to emit infrared light. Infrared light is invisible to the human eye but can be seen with special detectors and cameras.

Human breast cancer cells are injected into the mouse. After the nanoparticles are injected, researchers are able to see the tumor glowing using a laser to activate the nanoparticles and an infrared camera to detect their fluorescence. Credit: Prabhas Moghe, Rutgers University
Moghe and his team tested the ability of the ReANCs to track cancer metastases in mice implanted with human breast cancer cells. The cancer migrated to distant organs such as bone, lungs, and adrenal glands and the researchers were able to track the infrared signals from the ReANCs over the course of weeks. This allowed them to study where, and how quickly, the metastasized tumors progressed. The experiments showed that the ReANCs were safe and had completely cleared from the animal after 7 days.

The team was able to create a “cocktail” combining all the different targeted ReANCs that could be combined in one injection—making it simple to illuminate of all the common sites of cancer metastasis at once. So far, the tests in mice have shown the nanoparticles to be more successful than both MRI and CT scans at identifying newly metastasized tumors in bones. It has not yet reached the gold standard of PET scans, but it does avoid exposing the subject to the radiation involved in PET imaging and is far less expensive than PET.

The ReANCs allow cancer to be illuminated in the leg bone and liver (images a and c), and lungs (images b and d) of this mouse. The bone lesions were able to be seen when the animal was on its stomach and the lung lesions were seen when animals was imaged while on its back. Credit: Prabhas Moghe, Rutgers University

“There are still significant hurdles to be overcome before this imaging technique could be used in humans, but it is an important step in moving optical imaging cancer diagnosis forward,” said Behrouz Shabestari, Ph.D., director of the NIBIB program in Optical Imaging and Spectroscopy. “It has the potential to help doctors to identify tiny cancer cells and track their spread more effectively, leading to early detection and potentially improved treatment planning.”

In addition to tracking the spread of cancer, the nanoparticles could potentially be used to differentiate cancer tissue from healthy tissue for surgeons who are removing tumors. Moghe and his team hope that the technology could be positioned for use in humans within the next decade.