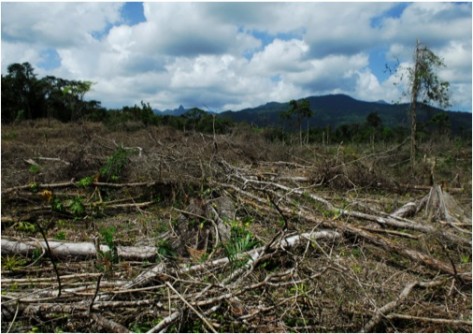 Recent narco-trafficking deforestation in a protected area of eastern Honduras.

Newswise — A group of researchers focused on sustainable practices, geography and earth sciences found something unexpected during their work in Central America: the effects of drug trafficking are leaving deep scars on a sensitive landscape.

They call the phenomenon “narco-deforestation,” and the result is every bit as dark as it sounds.

As Nielsen and his colleagues point out in a policy paper published in Science, drug traffickers are slashing down forests, often within protected areas, to carve clandestine landing strips and roads, and to establish cattle ranches through which drug money can be laundered.

The researchers hope the United States and other countries in the region will “rethink drug policy with a bright light on the unintended consequences on conservation,” Nielsen said. As they state in the paper, drug policy should be seen as conservation policy.

Nielsen said these conclusions resulted from numerous individual lines of inquiry that converged “serendipitously” when he and his colleagues began noticing the same disturbing trend at multiple sites in Guatemala and Honduras. Nielsen and his team were working to understand the effects of forest carbon offset programs on community-based conservation and the feasibility of reducing deforestation at the local level.

“Around 2007, we started to see this pretty amazing uptick in deforestation in communities where I’ve been doing research for a long time,” Nielsen said. “We started asking, ‘What’s going on here?’ The presence of narco-traffickers was the response.”

Nielsen explained that the “cat-and-mouse” game of interdiction and evasion has been pushing traffickers into more remote areas. At a higher policy level, as trafficking was squeezed out of Mexico and the Caribbean, “then we really started seeing the impact in Central America.”

The value of landscapes being ravaged should not be underestimated, Nielsen said, pointing out that deforestation is affecting conservation of the globally significant Mesoamerican Biological Corridor. He called biosphere reserves in the area “equal to the Grand Canyon in terms of how the international community looks at their cultural and biological values. There is going to be a long-term consequence.”

While Nielsen acknowledged that he and his colleagues are not drug policy experts, they hope their message will influence those who are, including leaders of governments seeking to determine how to proceed in the oft-criticized war on drugs.

“However that discussion takes place, conservation should be a major factor in how we think about drug policy,” Nielsen said.

As Nielsen’s own research moves forward, he hopes to acquire “more spatially explicit data that the military has about drug movements. Then we can analyze the temporal and spatial relationship between trafficking nodes and deforestation.”

Nielsen said he and Ophelia Wang, a geographer and spatial analyst with NAU’s Landscape Conservation Initiative, and Spencer Plumb, Nielsen’s former master’s student now in a Ph.D. program at the University of Idaho, will continue to investigate with the other Science paper contributors.