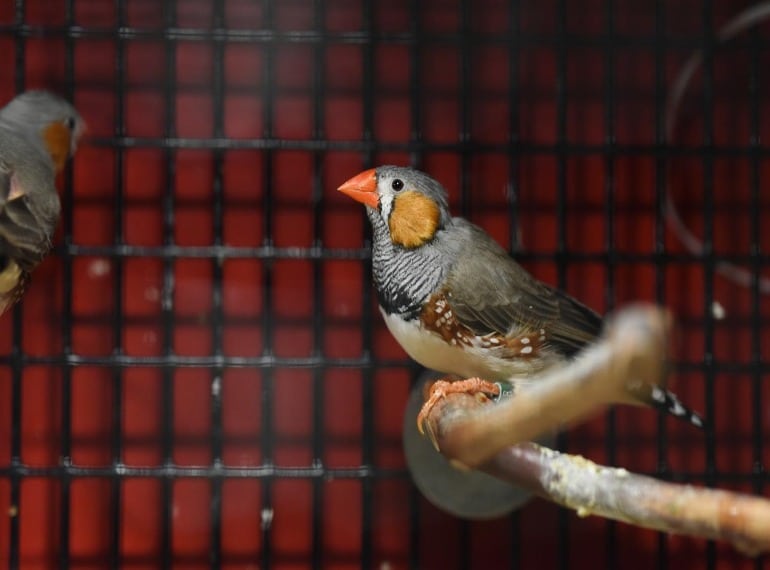 Studies involving the zebra finch, a songbird, are helping researchers learn how the brain memorizes and learns songs

The findings, published online today in Science Advances, may help explain the deficits in speech and language that often accompany ASD and could eventually lead to new treatments specifically targeting this aspect of the disorder.

Study leader Todd Roberts, Ph.D., associate professor of neuroscience and a member of the Peter O’Donnell Jr. Brain Institute at UT Southwestern, explains that the vocalizations that comprise a central part of human communication are relatively unique among the animal world – not just for their complexity, but in the way they’re passed down from caregivers to offspring. Songbirds such as zebra finches also learn complex vocalizations from caregivers (songs are passed on to male offspring typically from their fathers). Much like humans, these animals have intricate brain circuitry devoted to this task, found in a region of the brain in the birds often referred to as the high vocal center, or HVC.

Because of the parallels between language learning in humans and song learning in the birds, Roberts says, songbirds are often used as a scientific model for understanding speech development in people, including conditions in which vocal communication is changed.

In their research, Roberts and his colleagues used zebra finches to study the role of a gene called FoxP1, one of the genes most correlated with ASD. Mutations of this gene cause a specific subtype of autism linked with severe language impairment and intellectual disability.

Roberts, a Thomas O. Hicks Scholar in Medical Research, explains that learning vocalizations for both songbirds and humans consists of two different stages: First, birds and humans must form a memory of sounds. Next, they practice the sounds through imitation. Juvenile zebra finches typically practice their fathers’ song thousands of times a day over three months, rehearsing it around 100,000 times until it’s a close match. These birds can memorize the song 20 to 60 days after hatching, but they don’t start to practice singing it until approximately 35 to 40 days after hatching.

To better understand the role FoxP1 might play in both parts of this process, the researchers separated young zebra finches into two groups: Half the birds spent their early lives in contact with their singing fathers and continued to live with them while they practiced their songs; the other half spent their early lives with their songless mothers and later joined their fathers during the practice phase. Either before the birds formed memories of the songs or before they began practicing, Roberts and his colleagues used a technique called RNA interference to “knock down” FoxP1 in the birds’ HVC, ridding cells in this brain region of the vast majority of this gene’s protein products. This technique used constructs created in the lab of Roberts’ close collaborator and study co-author Genevieve Konopka, Ph.D., associate professor of neuroscience at UT Southwestern.

When the researchers analyzed the birds’ songs in adulthood, they found that only those with active FoxP1 during the song memorization phase were able to accurately reproduce their fathers’ songs. If this gene was knocked down during the practice phase, these birds could still correctly mimic the songs. However, birds in which FoxP1 was inactivated before memorization sang haphazard songs that bore no resemblance to the ones their fathers sang.

“Our results suggest that FoxP1 is key for forming the song memories in these birds that are critical for imitation later in life,” Roberts says. “A similar deficit in humans could play a parallel role in speech development, blocking babies from forming memories of adult speech they hear around them and hindering their own communication as they grow.”

If this finding is reinforced in future studies, he adds, it could lead to new types of therapy for children with autism. Current ASD therapies centered on speech development often focus on helping children learn the motor skills necessary to produce sounds. However, Roberts says, techniques that focus on helping children form speech memories may be more important. In the future, he says, it may be possible to avoid speech deficits by replacing the missing FoxP1 protein using gene editing or altering FoxP1-regulated signaling using pharmaceuticals.

“This study is not only critical for understanding the symptoms of patients with FoxP1-related ASD but also lays the groundwork for studying many other genes associated with ASD using the songbird system,” adds Konopka, a Jon Heighten Scholar in Autism Research.

Caption: Studies involving the zebra finch, a songbird, are helping researchers learn how the brain memorizes and learns songs