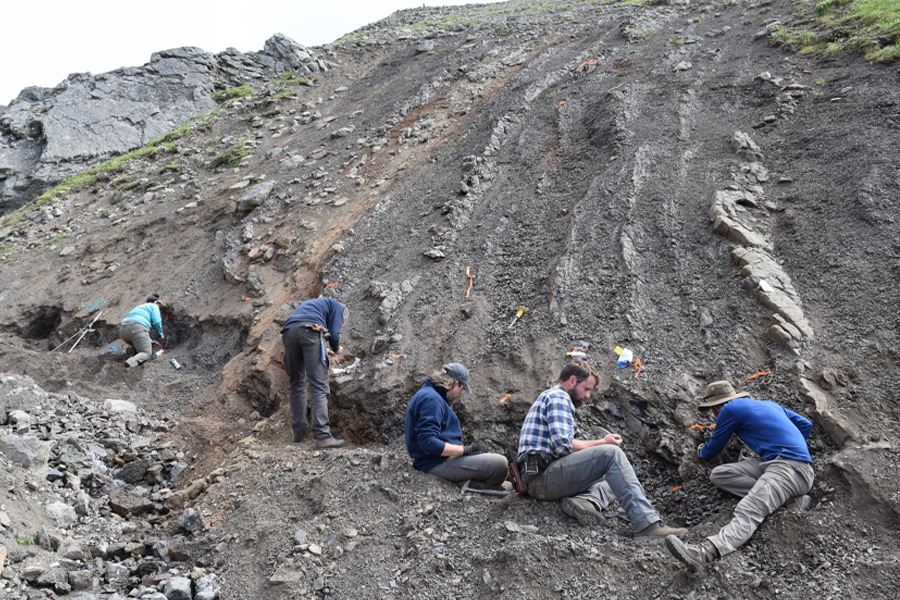 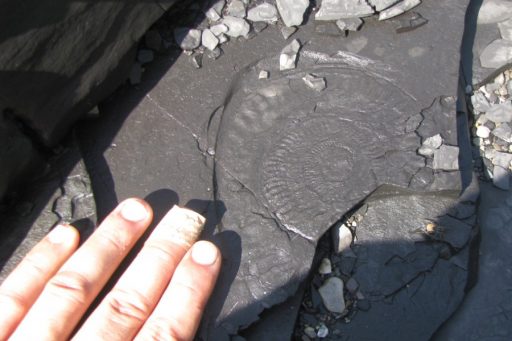 A fossilized ammonite found during fieldwork in Alberta, Canada.

The decrease may have contributed to the mass extinction, in which up to 90% of species in the oceans perished, and it suggests that much more organic carbon was buried in the extinction event — the Early Jurassic mass extinction — than had been previously estimated. The work is published in AGU Advances.

“This research tells us more about what was happening with molybdenum during this extinction event, but we also take it a step further,” said Jeremy Owens, an associate professor in FSU’s Department of Earth, Ocean and Atmospheric Science and a paper co-author. “Our findings help us understand how much carbon was cycling through the system, and it’s much larger than previously thought — potentially on the scale of modern atmospheric and oceanic increases due to human activities.”

Previous research showed decreases in molybdenum during the main phase of the ancient mass extinction, but it was unclear how widespread the decrease was, how early it started or how long it lasted.

To answer those questions, the researchers analyzed rocks from three sites in Alberta, Canada, which had been part of a massive ocean that surrounded the ancient continent of Pangea. Because the site was connected to that global ocean, the researchers were able to infer conditions across the entire globe, instead of only a single basin.

They found new estimates for the start and duration of the molybdenum drawdown and the initial phase of deoxygenation. Their research showed that the decrease preceded the start of the extinction by about one million years, and it lasted about two million years in total, which is much longer than scientists had previously estimated.

The decrease in molybdenum also implies a massive increase in organic carbon burial in the ocean that may have been several times larger than previous calculations. Those calculations were based on estimations of carbon dioxide released from volcanic activity, implying that carbon dioxide release from volcanoes was actually much higher, which would be necessary to balance global carbon reservoirs.

Just like 183 million years ago, more and more carbon dioxide is being added to the Earth system today, which could reduce marine trace metals such as molybdenum that many organisms rely on for survival as the oceans lose oxygen and bury more organic carbon. After the ancient extinction event, global conditions gradually became more hospitable to life, but that process took hundreds of thousands of years.

“The uniqueness of the study sites has allowed us to take a deep look into how the chemistry of the global ocean changed across millions of years, which reconciles much of the current scientific debates that are focused on the local versus global aspects of this time interval,” said Theodore Them, a former postdoctoral fellow at FSU who is now an assistant professor at the College of Charleston.

Researchers from the California Institute of Technology, Western Michigan University, Utrecht University, and Virginia Polytechnic Institute and State University were co-authors in this study.

This research was supported by grants from the National Science Foundation, NASA and the Sloan Foundation.

Caption: A fossilized ammonite found during fieldwork in Alberta, Canada.