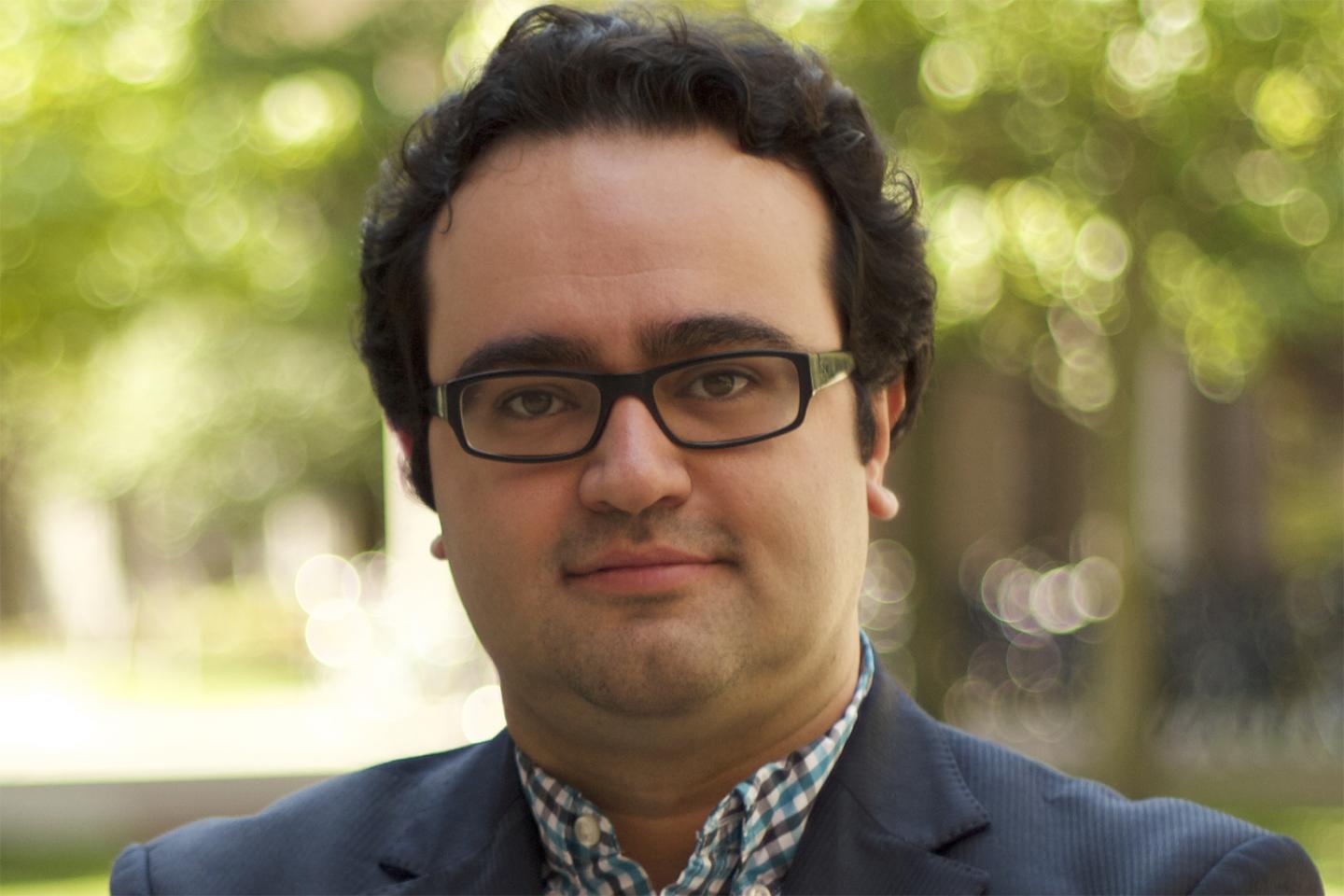 Pedram Hassanzadeh is a fluid dynamicist, atmospheric modeler and assistant professor of mechanical engineering and of Earth, environmental and planetary sciences at Rice University.

Newswise — HOUSTON -- (July 7, 2020) -- Climate change will intensify winds that steer hurricanes north over Texas in the final 25 years of this century, increasing the odds for fast-moving storms like 2008's Ike compared with slow-movers like 2017's Harvey, according to new research.

The study published online July 3 in Nature Communications examined regional atmospheric wind patterns that are likely to exist over Texas from 2075-2100 as Earth's climate changes due to increased greenhouse emissions.

The research began in Houston as Harvey deluged the city with 30-40 inches of rain over five days. Rice University researchers riding out the storm began collaborating with colleagues from Columbia University's Lamont-Doherty Earth Observatory (LDEO) and Harvard University to explore whether climate change would increase the likelihood of slow-moving rainmakers like Harvey.

"We find that the probability of having strong northward steering winds will increase with climate change, meaning hurricanes over Texas will be more likely to move like Ike than Harvey," said study lead author Pedram Hassanzadeh of Rice.

Harvey caused an estimated $125 billion in damage, matching 2005's Katrina as the costliest hurricane in U.S. history. Ike was marked by coastal flooding and high winds that caused $38 billion damage across several states. It was the second-costliest U.S. hurricane at the time and has since moved to sixth. Ike struck Galveston around 2 a.m. Sept. 13, 2008, crossed Texas in less than one day and caused record power outages from Arkansas to Ohio on Sept. 14.

Hassanzadeh, a fluid dynamicist, atmospheric modeler and assistant professor of both mechanical engineering and Earth, environmental and planetary sciences, said the findings don't suggest that slow-moving storms like Harvey won't happen in late 21st century. Rather, they suggest that storms during the period will be more likely to be fast-moving than slow-moving. The study found the chances that a Texas hurricane will be fast-moving as opposed to slow-moving will rise by about 50% in the last quarter of the 21st century compared with the final quarter of the 20th century.

"These results are very interesting, given that a previous study that considered the Atlantic basin as a whole noticed a trend for slower-moving storms in the past 30 years," said study co-author Suzana Camargo, LDEO's Marie Tharp Lamont Research Professor. "By contrast, our study focused on changes at the end of the 21st century and shows that we need to consider much smaller regional scales, as their trends might differ from the average across much larger regions."

Hassanzadeh said the researchers used more than a dozen different computer models to produce several hundred simulations and found that "all of them agreed on an increase in northward steering winds over Texas."

Steering winds are strong currents in the lower 10 kilometers of the atmosphere that move hurricanes.

"It doesn't happen a lot, in studying the climate system, that you get such a robust regional signal in wind patterns," he said.

Harvey was the first hurricane Hassanzadeh experienced. He'd moved to Houston the previous year and was stunned by the slow-motion destruction that played out as bayous, creeks and rivers in and around the city topped their banks.

"I was sitting at home watching, just looking at the rain when (study co-author) Laurence (Yeung) emailed a bunch of us, asking 'What's going on? Why is this thing not moving?'" Hassanzadeh recalled. "That got things going. People started replying. That's the good thing about being surrounded by smart people. Laurence got us started, and things took off."

Yeung, an atmospheric chemist, Hassanzadeh and two other Rice professors on the original email, atmospheric scientist Dan Cohan and flooding expert Phil Bedient, won one of the first grants from Rice's Houston Engagement and Recovery Effort (HERE), a research fund Rice established in response to Harvey.

"Without that, we couldn't have done this work," Hassanzadeh said. The HERE grant allowed Rice co-author Ebrahim Nabizadeh, a graduate student in mechanical engineering, to work for several months, analyzing the first of hundreds of computer simulations based on large-scale climate models.

The day Harvey made landfall, Hassanzadeh also had reached out to Columbia's Chia-Ying Lee, an expert in both tropical storms and climate downscaling, procedures that use known information at large scales to make projections at local scales. Lee and Camargo used information from the large-scale simulations to make a regional model that simulated storms' tracks over Texas in a warming climate.

"One challenge of studying the impact of climate change on hurricanes at a regional level is the lack of data," said Lee, a Lamont Assistant Research Professor at LDEO. "At Columbia University, we have developed a downscaling model that uses physics-based statistics to connect large-scale atmospheric conditions to the formation, movement and intensity of hurricanes. The model's physical basis allowed us to account for the impact of climate change, and its statistical features allowed us to simulate a sufficient number of Texas storms."

Hassanzadeh said, "Once we found that robust signal, where all the models agreed, we thought, 'There should be a robust mechanism that's causing this.'"

He reached out to tropical climate dynamicist Ding Ma of Harvard to get another perspective.

"We were able to show that changes in two important processes were joining forces and resulting in the strong signal from the models," said Ma, a postdoctoral researcher in Earth and planetary sciences.

One of the processes was the Atlantic subtropical high, or Bermuda high, a semipermanent area of high pressure that forms over the Atlantic Ocean during the summer, and the other was the North American monsoon, an uptick in rainfall and thunderstorms over the southwestern U.S. and northwestern Mexico that typically occurs between July and September. Hassanzadeh said recent studies have shown that each of these are projected to change as Earth's climate warms.

Hassanzadeh said the increased northward winds from both east and west "gives you a strong reinforcing effect over the whole troposphere, up to about 10 kilometers, over Texas. This has important implications for the movement of future Texas hurricanes."

Models showed that the effect extended into western Louisiana, but the picture became murkier as the researchers looked further east, he said.

"You don't have the robust signal like you do over Texas," Hassanzadeh said. "If you look at Florida, for instance, there's a lot of variation in the models. This shows how important it is to conduct studies that focus on climate impacts in specific regions. If we had looked at all of North America, for example, and tried to average over the whole region, we would have missed this localized mechanism over Texas."

Located on a 300-acre forested campus in Houston, Rice University is consistently ranked among the nation's top 20 universities by U.S. News & World Report. Rice has highly respected schools of Architecture, Business, Continuing Studies, Engineering, Humanities, Music, Natural Sciences and Social Sciences and is home to the Baker Institute for Public Policy. With 3,962 undergraduates and 3,027 graduate students, Rice's undergraduate student-to-faculty ratio is just under 6-to-1. Its residential college system builds close-knit communities and lifelong friendships, just one reason why Rice is ranked No. 1 for lots of race/class interaction and No. 4 for quality of life by the Princeton Review. Rice is also rated as a best value among private universities by Kiplinger's Personal Finance.