Future Weather Forecasting: It’s all in the “MRI” of Clouds 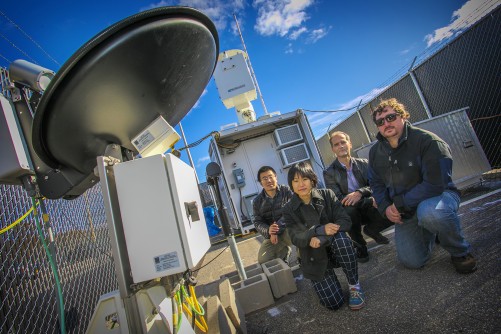 Newswise — Stony Brook, NY, January 12, 2018 – Analyzing and determining the structure of clouds remains a challenge for scientists trying to forecast weather. A team of researchers at the Stony Brook University School of Marine and Atmospheric Sciences (SoMAS), led by Professor Pavlos Kollias, is using news types or radar in combination with current meteorology technology to take an “MRI” of clouds. In the same way an MRI and other imaging techniques help physicians visualize and understand what is happening within human body parts, and MRI of clouds helps scientists better understand what happens inside clouds.

Clouds are complex, fast evolving, occur over vast areas and as such are difficult to characterize using current technologies. But with these new radar technologies and forecasting techniques, Kollias and colleagues at Stony Brook University and Brookhaven National Laboratory are completing cloud and precipitation research at the SoMAS Radar Observatory that may evolve into a new way to better forecast weather.

“Using these technologies, we can pinpoint and highlight different components of the interior of clouds,” says Kollias. “We can see how precipitation forms and grows in clouds and better predict not only if it will rain or snow, but how much rain or snow may accumulate on the ground.”

He says the goal of the research is to use data from MRIs of clouds to improve the ability of weather modeling to forecast the type of precipitation and amount on the ground with a level of accuracy and precision not reached previously by meteorologists.

The SoMAS Radar Observatory contains a large array of sensors with different viewing perspectives and different sensitivities allowing observation of the horizontal distribution as well as vertical structure of clouds and precipitation. Moreover, the Observatory is uniquely geographically positioned in the center of the Northeast and coastal for study of winter storms.

For more details about Stony Brook’s use of radar and the MRI of clouds, see this video.