Mutations in the circadian genes could drive night eating syndrome. 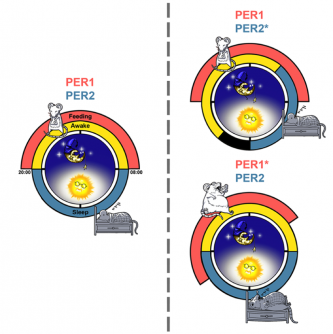 Newswise — LA JOLLA—For most people, the urge to eat a meal or snack comes at a few, predictable times during the waking part of the day. But for those with a rare syndrome, hunger comes at unwanted hours, interrupts sleep and causes overeating. Now, Salk scientists have discovered a pair of genes that normally keeps eating schedules in sync with daily sleep rhythms, and, when mutated, may play a role in so-called night eating syndrome. In mice with mutations in one of the genes, eating patterns are shifted, leading to unusual mealtimes and weight gain. The results were published in this month's Cell Reports.

“We really never expected that we would be able to decouple the sleep-wake cycle and the eating cycle, especially with a simple mutation,” says senior study author Satchidananda Panda, an associate professor in Salk’s Regulatory Biology Laboratory. “It opens up a whole lot of future questions about how these cycles are regulated.”

More than a decade ago, researchers discovered that individuals with an inherited sleep disorder often carry a particular mutation in a protein called PER2. The mutation is in an area of the protein that can be phosphorylated—the ability to bond with a phosphate chemical that changes the protein’s function. Humans have three PER, or period, genes, all thought to play a role in the daily circadian clock and all containing the same phosphorylation spot.

The Salk scientists joined forces with a Chinese team led by Ying Xu of Nanjing University to test whether mutations in the equivalent area of PER1 would have the same effect as those in PER2 that caused the sleep disorder. So they bred mice to lack the mouse period genes, and added in a human PER1 or PER2 with a mutation in the phosphorylation site. As expected, mice with a mutated PER2 had sleep defects, dozing off earlier than usual. The same wasn’t true for PER1 mutations though.

“In the mice without PER1, there was no obvious defect in their sleep-wake cycles,” says Panda. “Instead, when we looked at their metabolism, we suddenly saw drastic changes."

Mice with the PER1 phosphorylation defects ate earlier than other mice—causing them to wake up and snack before their sleep cycle was over—and ate more food throughout their normal waking period. When the researchers looked at the molecular details of the PER1 protein, they found that the mutated PER1 led to lower protein levels during the sleeping period, higher levels during the waking period, and a faster degradation of protein whenever it was produced by cells.

Panda and his colleagues hypothesize that normally, PER1 and PER2 are kept synchronized since they have identical phosphorylation sites—they are turned on and off at the same times, keeping sleep and eating cycles aligned. But a mutation in one of the genes could break this link, and cause off-cycle eating or sleeping.

“For a long time, people discounted night eating syndrome as not real,” says Panda. “These results in mice suggest that it could actually be a genetic basis for the syndrome.” The researchers haven’t yet tested, however, whether any humans with night eating syndrome have mutations in PER1.

When Panda and Xu’s team restricted access to food, providing it only at the mice’s normal meal times, they found that even with a genetic mutation in PER1, mice could maintain a normal weight. Over a 10-week follow-up, these mice—with a PER1 mutation but timed access to food—showed no differences to control animals. This tells the researchers that the weight gain caused by PER1 is entirely caused by meal mistiming, not other metabolic defects.

Next, they hope to study exactly how PER1 controls appetite and eating behavior—whether its molecular actions work through the liver, fat cells, brain or other organs.

This work was supported by grants from the National Institute of Health, USA, the Ministry of Science and Technology of China, the National Science Foundation of China.

The Salk Institute for Biological Studies is one of the world's preeminent basic research institutions, where internationally renowned faculty probes fundamental life science questions in a unique, collaborative and creative environment. Focused both on discovery and on mentoring future generations of researchers, Salk scientists make groundbreaking contributions to our understanding of cancer, aging, Alzheimer's, diabetes and infectious diseases by studying neuroscience, genetics, cell and plant biology, and related disciplines. Faculty achievements have been recognized with numerous honors, including Nobel Prizes and memberships in the National Academy of Sciences. Founded in 1960 by polio vaccine pioneer Jonas Salk, M.D., the Institute is an independent nonprofit organization and architectural landmark.