31-May-2017 2:00 PM EDT, by Stowers Institute for Medical Research
favorite_border 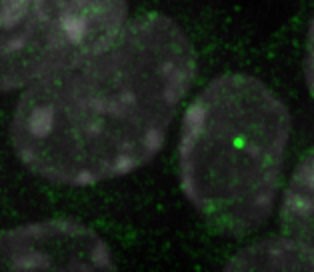 Cellular localization of Nanog transcripts: The brightest green spot is where Nanog mRNA is being transcribed within a cell nucleus, while the dimmer green spots indicate stable Nanog transcirpts elswehere in the cell.

Newswise — KANSAS CITY, MO — Competing regulatory genes “talk” to each other to maintain balance of cell state, according to new research from the Stowers Institute for Medical Research.

In a study published online June 5, 2017, in the Proceedings of the National Academy of Sciences, Stowers scientists Bony De Kumar, Ph.D., and Robb Krumlauf, Ph.D., provide evidence of direct cross-regulatory feedback, or cross-talk, between Nanog and Hox genes.

Nanog and Hox genes regulate cell pluripotency and differentiation, respectively. When cells are pluripotent, they have the capacity to self-renew and the potential to change into any of a number of cell types.  And when cells differentiate, they become a more specialized cell type, like heart, brain, or skin cells.

In adult organisms, striking a balance between these two states is important to keep many tissues in equilibrium. The blood supply, for example, has cells that are differentiating, dying, or being repaired, and a reserve population of blood-producing adult stem cells is needed to help replace them.

The Stowers study suggests that balance between pluripotency and differentiation hinges in part on regulatory communication involving inhibition between Nanog and Hox genes. Krumlauf compares this cross-talk to parents giving their children instructions.

“Parents may say, ‘You need to get good grades; you need to learn this,’ for positive guidance but they are likely to reinforce the importance of that advice and minimize negative outcomes by saying, ‘You don’t want to do this,’” says Krumlauf, an investigator and scientific director at the Stowers Institute and senior author of the study.

Both positive and negative instructions are important. Nanog and Hox genes each have their own distinct jobs and by inhibiting each other they work together to direct the proper balance of cell states by helping the cell avoid wrong turns and stay on course.

“Differentiation and pluripotency are well-studied processes,” says first author De Kumar. “This paper actually links the processes together. Before, we did not know that these pathways were talking to each other. It was pretty surprising for us.”

The researchers made the discovery while studying Hox genes in the early stages of mouse embryonic stem cell differentiation. These “architect genes” control the layout of a developing embryo and play a key role in the establishment of the basic body plan and craniofacial development.

At two hours and 12 hours of retinoic acid treatment, the researchers found that both Hox and Nanog genes bound to many of the same target sites in the cell, indicative of the regulatory cross-talk between the pluripotency and differentiation pathways. The researchers also observed that depending on the context, Hox and Nanog repress each other. The findings paint a picture of cell states that is more plastic than in a fixed program.

“Over the past 10 to 20 years, biologists have shown that cells are actively assessing their environment, and that they have many fates they can choose. The regulatory loops we’ve found show how the dynamic nature of cells is being maintained,” says Krumlauf, who was recently inducted into the National Academy of Sciences for his seminal work on Hox genes.

The work provides important insight into the basic processes of tissue formation, and holds relevance for the field of regenerative medicine and the development of therapeutic approaches for certain cancers.

The work was funded by the Stowers Institute for Medical Research.

Researchers at Stowers Institute for Medical Research examined the relationship between two regulator genes — Nanog and Hox. Nanog regulates a cell state called pluripotency, where a cell has the ability to self-renew and the potential to change into any of a number of cell types. Hox sparks cells to differentiate, or become a more specialized cell type such as a heart, brain, or skin cell. These genes “talk” to each other to keep cells balanced between pluripotency and differentiation. Researchers from the Krumlauf Lab and their Stowers collaborators provide evidence of this direct cross-regulatory feedback, or cross-talk, using mouse and zebrafish model systems. The study was published online June 5, 2017, in the Proceedings of the National Academy of Sciences. Nanog and Hox genes work together to direct the cell by helping it avoid wrong turns and stay on course. The work provides important insight into the basic processes of tissue formation, and holds relevance for the field of regenerative medicine and the development of therapeutic approaches for certain cancers.

The Stowers Institute for Medical Research is a non-profit, basic biomedical research organization dedicated to improving human health by studying the fundamental processes of life. Jim Stowers, founder of American Century Investments, and his wife, Virginia, opened the Institute in 2000. Currently, the Institute is home to about 500 researchers and support personnel, over 20 independent research programs, and more than a dozen technology development and core facilities. Learn more about the Institute at www.stowers.org and about its graduate program at www.stowers.org/gradschool

ProceedingsProceedings of the National Academy of Sciences