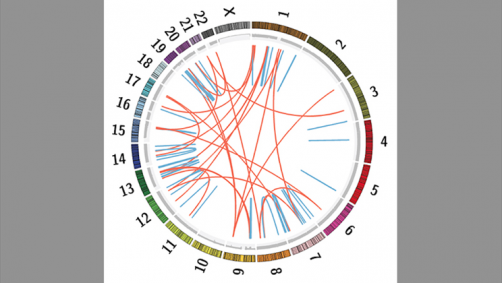 The median survival rate for patients with glioblastoma multiform (GBM) is only 15 months, but three separate genomic analyses of the tumor identified new mutations that allowed doctors to adjust treatment and keep the patient alive for over five years, through two recurrences of the cancer.

“We were able to identify the molecular profile at each recurrence,” said Dr. Murat Günel, chair and the Nixdorff-German Professor in the Department of Neurosurgery, researcher with Yale Cancer Center, and senior author of the paper. “The molecular make-up of the cancer changed after each treatment and with time, but we were able to adjust treatments based on those profiles.”

For instance, the last genomic analysis revealed mutations of the cancer — under selective pressure from targeted therapies — had increased 30-fold, making the patient a good candidate for immunotherapy. Although there was an initial response, the cancer ultimately progressed.

The researchers were able to extend the findings on this case to more than 100 other GBM cases, leading to the observation that most GBMs change their genomic profile during therapy. “These findings have significant implications for precision treatment of these tumors” said Dr. Zeynep Erson Omay, the first author of the study and a research scientist in neurosurgery. “We now do a genetic analysis on every glioma surgically removed at Smilow Cancer Hospital during each recurrence or progression, comparing the molecular genomic profile to the original cancer to make treatment decisions.”

With new drugs available, there is hope that “we will soon start to see real changes in patient outcomes,” Gunel said.

The study was funded by the Gregory Kiez and Mehmet Kutman Foundation.