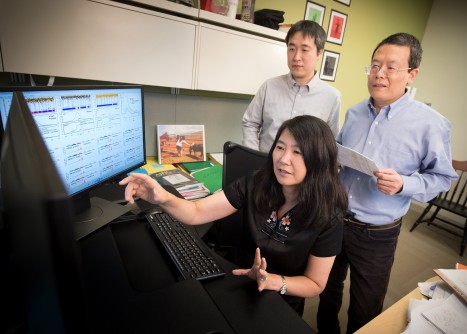 Newswise — Researchers have determined that children and adults with cancer usually have different mutated genes driving their disease, which suggests they would likely benefit from different therapies. The finding, from a collaborative study led by St. Jude Children’s Research Hospital, underscores the need to develop precision medicines for pediatric cancer.

The research, along with a companion study led by scientists at the Hopp Children’s Cancer Center at NCT Heidelberg (KiTZ) and the German Cancer Research Center, Heidelberg, appears as an advance online publication today in the scientific journal Nature.

The findings from the back-to-back papers provide the most comprehensive analysis yet of the genomic landscape of childhood cancer across multiple subtypes. The results will help guide clinical and laboratory research to improve understanding, diagnosis and treatment of pediatric cancer patients worldwide, including the estimated 15,780 children and adolescents diagnosed annually in the U.S.

Rather than focusing on a single tumor type, the St. Jude—led study evaluated data generated by members of the Therapeutic Applicable Research to Generate Effective Treatments (TARGET) program. The study was funded in part by the National Cancer Institute of the National Institutes of Health.

The scientists evaluated six cancer subtypes using three different, next-generation sequencing approaches. The researchers compared somatic genetic mutations—genomic changes found in cancer cells but not in normal cells—and their impact on key biological processes in tumor and normal tissues of 1,699 pediatric cancer patients. The approach, called pan-cancer analysis, revealed that only 45 percent of the mutated genes “driving” cancer in children are the same as the genes “driving” cancer in adults.

“This shows for the first time that pediatric and adult cancers frequently arise from different genes with different mutations,” said corresponding author Jinghui Zhang, Ph.D., chair of the St. Jude Department of Computational Biology. The first authors are Xiaotu Ma, Ph.D., and Yu Liu, Ph.D., both members of her laboratory.

“The results really bring home the message that pediatric cancer patients are not small adults and their disease should not be treated as if that were the case,” Zhang said. “Better treatments and more sensitive diagnostic tests require understanding the biology driving pediatric cancer. These results provide a better roadmap for researchers working in the laboratory and the clinic.”

Treatment advances have pushed cure rates for pediatric cancer to better than 80 percent, but cancer remains the leading cause of death by disease in U.S. children ages 1 to 19. Treatments often involve major life-long side effects, including the risk of second cancers.

The Genomic Architecture of Pediatric Cancers

The analysis included patients enrolled in the clinical trials of the Children’s Oncology Group, a clinical research cooperative. The patients had acute lymphoblastic leukemia, both B and T-cell ALL; acute myeloid leukemia; the bone cancer osteosarcoma; the kidney cancer called Wilms tumor; and neuroblastoma, a tumor of the sympathetic nervous system.

Unlike a previously published adult pan-cancer analysis, which focused primarily on coding sequence mutations, the St. Jude team analyzed variations in DNA copies and chromosomal rearrangements. The data were from whole genome sequencing of the complete DNA of patients’ tumor and normal tissue. Transcriptome sequencing was also performed. That provided a snapshot of gene expression in cells. The analysis also included the first comprehensive evaluation of quantitative and qualitative expression of mutant versus wild-type alleles in multiple cancer subtypes.

The sequencing data was provided by the National Cancer Institute’s TARGET initiative. TARGET was launched to understand the genetic changes that underlie pediatric cancer. The intention of the program was to use the data by the research community to improve the precision oncology treatment of pediatric cancers.

For this study, Zhang and her colleagues processed the sequencing data using a uniform analytic framework. “Looking across tumor types helps to identify really important mutations in pediatric cancer and understand the pathways involved,” she said.

For example, the analysis identified unexpected patterns of mutations, or mutational signatures, in eight of the 689 patients with B-ALL. The patients’ DNA had a mutational signature consistent with exposure to ultraviolet light, which was previously observed exclusively in skin cancers. The patients also shared another genomic abnormality—too many or too few chromosomes. “This finding suggests that exposure to ultraviolet light may be a previously unrecognized environmental factor that increases the risk for developing leukemia in some children,” said co-author Ludmil Alexandrov, Ph.D., of the University of California, San Diego.

Zhang and several other St. Jude scientists are also co-authors of a study led by investigators at the German Cancer Research Center. That study included whole genome and whole exome data from 914 pediatric cancer patients with blood, central nervous system and solid tumors. The sequencing data came from the St. Jude Children’s Research Hospital—Washington University Pediatric Cancer Genome Project and other sources. The Pediatric Cancer Genome Project, which began in 2010, sequenced the genomes of more than 800 children and adolescents with some of the least-understood and most difficult-to-treat cancers.

Researchers worldwide can explore somatic mutation data used for both pediatric pan-cancer studies through the St. Jude interactive ProteinPaint portal. The information, including the genes, mutations and cellular pathways underlying a variety of pediatric cancers, is an unmatched resource for pediatric cancer research going forward. The TARGET initiative somatic variants used in the analysis are available at the NCI TARTGET Data Matrix, and the sequencing data will be available at the NCI’s Genomic Data Commons.

The research was funded in part by a contract (HHSN261200800001E) from the National Institutes of Health; grants (CA098543, CA21765) from the National Cancer Institute, part of the NIH; and ALSAC, the fundraising and awareness organization of St. Jude.