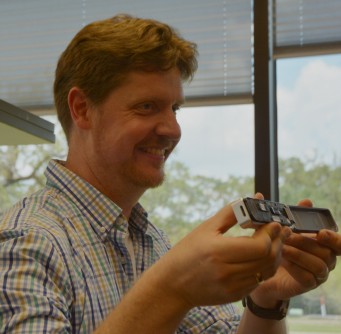 Dr. John Tyson, a minION instructor and research associate at the University of British Columbia in Vancouver, demonstrated a minION during a training of scientists at Texas A&M AgriLife Research. The minION is a sequencing system made by Oxford Nanopore Technology. Basically, it’s a handheld device into which a sample is placed and then within minutes the sample’s genome is translated into one’s laptop.

Newswise — COLLEGE STATION — Within five years, consumers may begin using a device smaller than a flip phone to monitor the air, test their food or diagnose what germ caused an upset stomach. And the root of this capability points to what now is only for scientists — genome sequencing.

That’s the message from a team of scientists from the U.K. and Canada teaching a weeklong class to about 40 fellow researchers from around the U.S. at Texas A&M AgriLife Research in College Station.

This course, a sort of “nerd summer camp for adults,” was different, organizers said.   Rather than instructing the art and science of genomics and bioinformatics on the multi-million-dollar equipment typically in labs, the class used the minION — a sequencing system made by Oxford Nanopore Technology. Basically, it’s a hand-held device into which a sample is placed and then within minutes the sample’s genome is translated into one’s laptop.

“The mobility of this system is what is attractive about this device,” said Dr. John Tyson, a minION instructor and research associate at the University of British Columbia in Vancouver.

The device has already been used to battle ebola in the remote jungles of Guinea and to sample both mosquitoes and humans for the presence of Zika virus in northeastern Brazil, according to minION instructor Dr. Nick Loman, independent research fellow at the University of Birmingham, England.

Knowing what pathogens are present early on, Loman said, can help scientists begin to work more toward surveillance and thus prevention rather than reacting to issues after they become problems. Dr. John Tyson, a minION instructor and research associate at the University of British Columbia in Vancouver, demonstrated a minION during a training of scientists at Texas A&M AgriLife Research. The minION is a sequencing system made by Oxford Nanopore Technology. Basically, it’s a handheld device into which a sample is placed and then within minutes the sample’s genome is translated into one’s laptop. (Texas A&M AgriLife Research photo by Kathleen Phillips)

The minION represents an enormous leap for researchers who need a highly portable system for a couple of reasons, according to Dr. Charlie Johnson, director of the Genomics and Bioinformatics Service with AgriLife Research in College Station. First, much research takes place in remote fields where larger equipment cannot be used. And second, the faster the results come, the more quickly they can be translated into actions.

“That being said, this type of portable technology is not a replacement for our workhouse enterprise-level Illumina sequencing systems, which can do the equivalent of 48 human genome projects in 48 hours,” said Johnson, noting that the first human genome project took 13 years. “Rather, the minION is another fantastic tool in our genomics tool belt.”

“Training others to use this type of technology helps empower research,” said Johnson, who co-hosted the event with Dr. Robert Burghardt and Ashley Gustafson from the Texas A&M School of Veterinary Medicine. “It’s easier to teach 250 students how to use a technology than to try to individually handle that many projects. And in agriculture, at least, our ultimate goal is to feed mankind, so this helps further our discoveries toward that end.”

Indeed, though the technology ultimately may be used to glean typical household information, the testing ground has largely been agriculture, natural resources and medicine, Johnson noted.

Researchers attending the training, in fact, were required to bring actual samples of their current projects to use while learning the technology. Included in the mix were studies on lions, bears, cats, Alaskan ice cores, manatees and various insects such as fleas and scorpions. Finding out what makes those things tick, so to speak,  can lead researchers to solutions.

“We’re just scratching the surface,” said Dr. Mick Watson, minION instructor and head of genomics at the University of Edinburgh, Scotland. “The technology is coming to a point where consumers will be able to use it in three to five years.”

Watson also stressed the importance of farmers being able to use the low-cost technology on farms to determine the presence of pathogens before they do excessive damage to crops and livestock.

It’s about rapid diagnosis so the correct treatments can be provided, and that in turn slows the rate of resistance to pesticides and medicine, he said.

“Often a doctor will prescribe a general antibiotic to make you feel better without knowing if it is the most effective on a particular bacteria, or if what you have is actually a virus,” he said. “Being able to quickly get the genomic sequence of a germ rather than wait for a culture to grow in a lab could lead to the ability to use a more narrow spectrum of antibiotics, which would limit the rate of antibiotic resistance.”

There also are some slightly more “off-the-wall” potential uses for the technology, such as quality control for craft brewers, the team noted. The conclusion of the weeklong course was a field trip to Jester King Brewery in Austin, which boasts of its use of “natural surroundings and local agriculture.” There, the newly equipped student researchers and the team collected yeast samples to run on the minIONs. Knowing what yeasts are present can help a brewery know how to manage the flavor of its content, Watson explained.

The training was sponsored by CyVerse, JetStream, XSEDE and the Texas Advanced Computing Center at the University of Texas, Austin. Johnson said the course, which was another first of its kind in the U.S., will serve as a model for future classes in the nation.